An important thing to note that other standard methods and default methods, are also allowed in a functional interface.
Example as follows:

Learning about functional Interface was a piece of cake, right?! Let's move ahead to know about a lambda. For that, let's go through the following code:

Using the above class TestCanHop, our Researcher could determine that from given animals, a cat can hop. Now the Researcher wants to identify animals which can swim. So, how should we change our code?

We will need to create another class TestCanSwim, which implements TestTraits—followed by creating another method printSwimmers in Researcher class. Not a lot of work, right?! But what if our curios researcher whats to explore animals for a lot of other traits.
Is there a way to avoid the effort of creating an entire class to implement a single method from an interface? Lambda expressions are our saviors!

This is how printHoppers method look now:

Does this a -> a.canHop() look similar to method body of
test method from TestCanHop ?

You got it right! Using lambda, we eliminated the entire method and thus need to create a class. As you see, code elimination is the apparent benefit of using lambda.

Now, the printHoppers method was expecting an instance of
TestTraits interface. But we pass this funky looking lambda in it, so how does it work? Well, Java does the work for us!
Java maps the lambda to the Interface, since there is only one method without any implementation, a.k.a abstract method in the Interface, a.k.a Functional interface, the mapping is evident for Java. 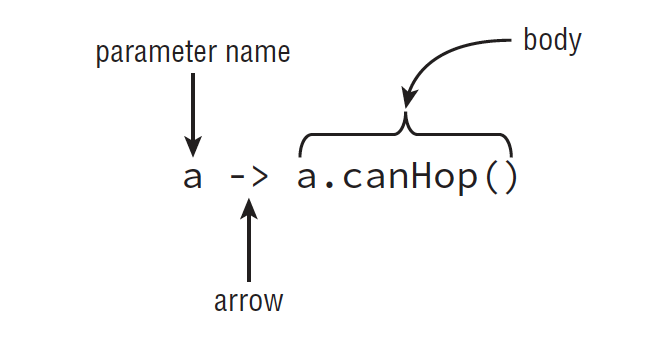 Here's the detailed syntax of a lamdba expression:

As you can see, the arrow is used to separate the method parameters and method body of test method from TestCanHop class. Thus, by using lambdas, we improve code readability.

In a nutshell, a lambda is a minimal way to write a method. It is an expression that can be passed as a method parameter. They are also known as 'anonymous functions.' Given the fact that despite being a method or function, it does not have a name.

Now there are specific rules for writing this lambda expression:

Let's go through above rules once again before trying to solve the following question.

To get used to the lambda syntax, lets find which one these are valid lambdas:

If not, don't worry, you will get there.

Reference used in this article:

With this article at OpenGenus, we must have a complete idea of Lambda Expressions in Java. Enjoy.

In this article, we will explore how to use complex numbers in C. There are two approaches: one is to implement it using struct in C and the other solution is to use complex.h library.