What is Histogram of Oreinted Gradients (HOG)?


Navneet Dalal and Bill Triggs introduced Histogram of Oriented Gradients(HOG) features in 2005. Histogram of Oriented Gradients (HOG) is a feature descriptor used in image processing, mainly for object detection. A feature descriptor is a representation of an image or an image patch that simplifies the image by extracting useful information from it.

The principle behind the histogram of oriented gradients descriptor is that local object appearance and shape within an image can be described by the distribution of intensity gradients or edge directions. The x and y derivatives of an image (Gradients) are useful because the magnitude of gradients is large around edges and corners due to abrupt change in intensity and we know that edges and corners pack in a lot more information about object shape than flat regions. So, the histograms of directions of gradients are used as features in this descriptor.


Now that we know basic priciple of Histogram of Oriented Gradients we will be moving into how we calculate the histograms and how these feature vectors, that are obtained from the HOG descriptor, are used by the classifier such a SVM to detect the concerned object.

Steps for Object Detection with HOG

Preprocessing of image involves normalising the image but it is entirely optional. It is used to improve performance of the HOG descriptor. Since, here we are building a simple descriptor we don't use any normalisation in preprocessing.

The first actual step in the HOG descriptor is to compute the image gradient in both the x and y direction.

Let us take an example. Say the pixel Q has values surrounding it as shown below:

We can calculate the Gradient magnitude for Q in x and y direction as follow:

We can get the magnitude of the gradient as:

And the direcction of the gradient as :

Compute Histogram of Gradients in 8×8 cells 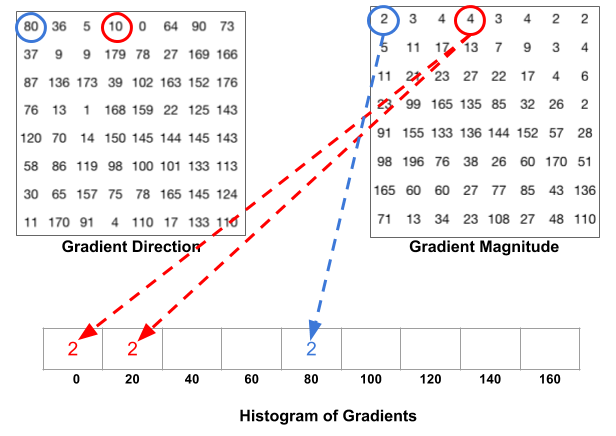 Illustration of splitting of gradient magitude according to gradient direction (Image source: https://www.learnopencv.com/histogram-of-oriented-gradients)

After the creation of histogram of oriented gradients we need to something else too. Gradient is sensitive to overall lighting. If we say divide/multiply pixel values by some constant in order to make it lighter/ darker the gradient magnitude will change and so will histogram values. We want that histogram values be independent of lighting. Normalization is done on the histogram vector v within a block. One of the following norms could be used:

Now, we could simply normalize the 9×1 histogram vector but it is better to normalize a bigger sized block of 16×16. A 16×16 block has 4 histograms (8×8 cell results to one histogram) which can be concatenated to form a 36 x 1 element vector and normalized. The 16×16 window then moves by 8 pixels and a normalized 36×1 vector is calculated over this window and the process is repeated for the image.

This vector is now used to train classifiers such as SVM and then do object detection.

Visualization of HOG features of image of the astronaut Eileen Collins.


In this tutorial we will be performing a simple Face Detection using HOG features.
We need to first train the classifier in order to do face detection so first we will need to have training set for the classifier.


Labeled Faces in the Wild dataset provided by Scikit-Learn consists of variety of faces which is perfect for our positive set.


For Negative set we need images without face on them. Scikit-Image offers images which can be used in this case. To incerease the size of negative set we extract patches of image at different scale using PatchExtractor from Scikit-Learn.

Scikit-Image's feature module offers a function skimage.feature.hog which extracts Histogram of Oriented Gradients (HOG) features for a given image. we combine the positive and negative set and compute the HOG features

We will use Scikit-Learn's LinearSVC with a grid search over a few choices of the C parameter:

We will take the best estimator and then build a model.

Testing on a new image

Now that we have built the Model we can test it on a new image to see how it detects the faces. 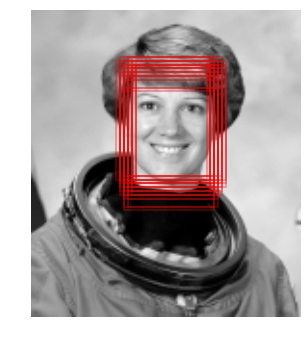 In this article, we have clarified the most usually utilized kinds of regressions in information science and its application in data analysis