"When there is Unity, there is always victory"

Ensemble modeling is a powerful way to improve the performance of your model. It is a machine learning paradigm where multiple models are trained to solve the same problem and combined to get better results. It is also an art of combining a diverse set of learners together to improvise on the stability and predictive power of the model.

Most common types of Ensemble Methods:

In this article, we will focus on Stacking. By the end of this article you will get knowledge about:

Stacking (a.k.a Stack Generalization) is an ensemble technique that uses meta-learning for generating predictions. It can harness the capabilities of well-performing as well as weakly-performing models on a classification or regression task and make predictions with better performance than any other single model in the ensemble.

It is an extended form of the Model Averaging Ensemble technique, where multiple sub-models contribute equally or according to their performance weights to a combined prediction. In Stacking, an entirely new model to trained to combine the contributions from each submodel and produce the best predictions. This final model is said to be stacked on top of the others, hence the name.

The Architecture of Stacking:

Stacking can have more than one level of base learners.

The following steps are involved in implementation:


We can implement stacking using StackingClassifier provided by scikit-learn. It is available in version 0.22 of the library and higher.

Here is the basic code implementation: 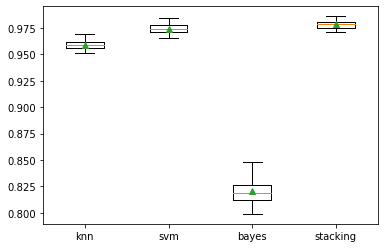 It can be seen that stacked ensemble model give the highest accuracy amongst all the models.

Difference between Bagging, Boosting and Stacking

Now, let's see how stacking differs from bagging and boosting.

For the final part to check your learning, try to answer the following question:

True
False
Base Learners are used for feature extraction and not the meta learner. Hence the answer is FALSE.

Stacking has been proved to be highly effective in kaggle competitions. So next time when you participate in any competition, you will have a powerful weapon in your hand ;)

Wanna dig deeper? Look at the give links:

The objective of this article is to explore various approaches that can be used to reverse the given stack (stack is a linear data structure where insertion and deletion are made at the same end).

Control flow statements are used for the controlled logical and conditional execution of a statement. We have explored Control Flow statements in Ruby in depth.