Consider a problem where we are given a set A consisting of k numbers. Given an integer n, the objective is to find a sequence of numbers S such that every possible n - digit combination from A occurs exactly once in this sequence. Such a sequence is called a de Bruijn sequence. These sequences have been named after the Dutch mathematician Nicolaas de Bruijn, and find widespread applications in the fields of computing, robotics and DNA sequencing.

There exist multiple methods to obtain the de Bruijn sequence for a given set of k numbers and a given length n. We shall look into some of these methods in detail.

Given a set of k numbers and a given length n, this method works as follows:

We consider the previous example. Here, we obtain the graph as follows:

Although this method gives us the correct solution, as the size of the set A increases, so would the number of nodes in the graph, and hence it would become more complex to finish the graph and find an appropriate path. To be more precise, since this method relies on the Hamiltonian method for finding the solution, and the time complexity of this path is given by O(kn 2kn) which is not feasible as n and k increase. Hence, we try to find more efficient solutions for this problem.

Given a set of k numbers and a given length n, this method works as follows:

For example, the graph for the given example would be as follows: 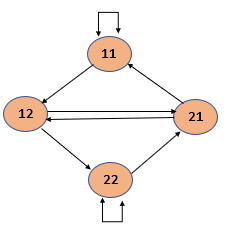 The implementation of the Euler's Path method using C++ is given below:

Here, the for loop inside the findpath method will run on average for kn times, hence the time complexity of this method is given by O(kn). Also, the space complexity is dependent on the number of edges, and is also hence given by O(kn).

Although this solution is much more efficient than the Hamiltonian cycle, one can observe that as the size of the set increases, this method shall also become very complex.

As the earlier two methods make the process of finding the correct solution extremely tedious in case of larger inputs, mathematicians have come up with an algorithm to find the de Bruijn sequence. Given a set of k digits and a number n, the algorithm is as follows:

For example, consider the set of elements {1, 2, 3} and we are to make all the 3 digit combinations using the same.

Note that although this method might seem tedious, it can be generalized to find the solution for any input size. Since this method goes through all possible combinations, it's time complexity is also given by O(kn). However, it is much easier to perform for larger outputs than the earlier two methods.

With this article at OpenGenus, you must have the complete idea of De Bruijn Sequences.

In this article, we have explored various ways to solve the problem of finding maximum size square submatrix with all 1s. This can be solved using Dynamic Programming.

In this article, we have explained the algorithm to Find Cube root using Binary Search along with Time and Space Complexity analysis.