In physical sciences, entropy is a measure of disorder of a system. Similarly in graph theory entropy is the index for describing the structure and function of a network. Entropy is related to amount of information stored in a graph. This is used in field of computer science to check compression of data as compressed data is more random and hence has higher entropy.

The entropy of a graph is an information theoretic functional which is defined on a graph with a probability density on its vertex set.

This functional was orignally proposed by J. Korner in 1973 to tudy minimum number of codewords required to represent an information source.

One of the most important properties of entropy of a graph is that it is subadditive with repect to union of graphs. This leads to its application in graph covering problem as well as problem of perfect hashing.

There are various ways for calculating entropy of a graph for undirected and directed graphs we will now have a look at these and their usage in more detail.

Entropy of a graph

which is also the Shanon entropy. When applying this on graphs the events are usually presumed to be the nodes of the graph. This was cited by J. Korner in his 1973 paper that talked about graph entropy.

Let G = (V,E) be an undirected graph. The graph entropy og G, denoted as H(G) is defined as

Whrere X is chosen uniformly from V,Y ranges over independent sets of G, the joint distribution of X and Y is such that X ∈ Y with probablity one, and I is the mutual information of X and Y.

The major properties of graph entropy are monotonicity, sub-additivity and additivity over vertex substitution

Entropy of some special graphs

However for directed graphs we use Chung's generalisation or von Neuman approach which is based on graph laplacian , this can be applied to both weakly and strongly directed graphs a simple form of this be represented in simple node in-degree out-degree based statistics.

This research on directed networks are significant to quantify structural information of the whole network. To quantify the entropy of a directed graph we rely on degreee based algorithms which measure the importance of vertices and is usually more sensitive than other indicators.

Now we have shifted to eigenvalue based entropy calculations which depend upon adjacency matrix. From typical modelsof complex networks a model of directed network is proposed that considers in-direction of node connections and eigenvalue based etropy of three matrices are calculated for directed nearest neighbour coupling. Directed small-world, directed scale-free and directed random networks.

Now we have another similar graph

Similar to what we did above 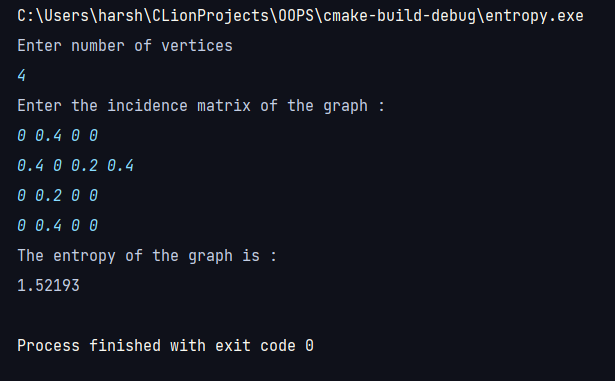 and we see the output of the program is within margin of error of what we had calculated above.

In this article, we have understood the reason behind the warning "TensorFlow binary was not compiled to use: AVX AVX2 AVX512 VNNI FMA" and presented 3 fixes using which the warning will not come.