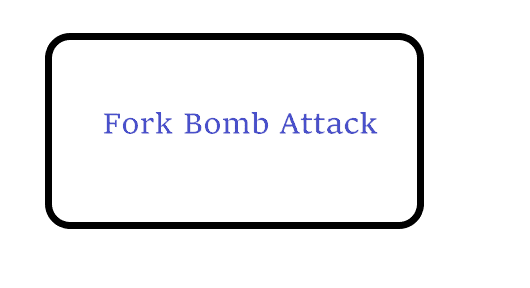 Fork Bomb Attack is a type of denial of service attack which causes the degradation of a system by making it run out of the memory. The attack forks the processes recursively to fill the entire available memory, thus choking the available system resources. Locating and terminating a Fork Bomb is a tedious process. When the saturation level is fully achieved in the process table, it is also a challenging task to develop the program to isolate the fork bomb.

Administrator should restart the entire system as locating and terminating a Fork Bomb is a tedious process. Limit the maximum number of processes a user can own. Avoid the use of fork in any of the statements, which might end up into an infinite loop.

Fork Bomb is which type of attacks?

Malvertising is a type of cyber attack in which an hacker use the online advertising to spread the malware. The attack can infect a system pre-click or post-click. A pre-click malvertisement can be embedded in the main scripts of the page. It can even initiate drive-by-download on visiting the site

Fenwick Tree / Binary indexed tree (BIT) is a data structure used to process interval/range based queries. Compared to segment tree data structure, Fenwick tree uses less space and is simpler to implement. One disadvantage is that it can be only used with an operation that is invertible.