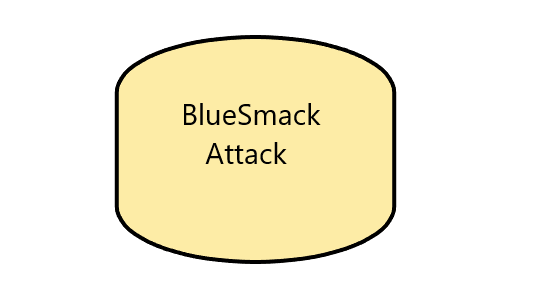 Bluesmack is a cyber attack done on bluetooth enabled devices. The attack uses L2CAP (Logic Link Control And Adaptation Protocol) layer to transfer an oversized packet to the Bluetooth enabled devices, resulting in the Denial of Service (DoS) attack.
The attack can be performed in a very limited range, usually around 10 meters for the smartphones. For laptops, it can reach up to the 100 meters with powerful transmitters.

Turn the Bluetooth off when not in use. Do not store the permanent pairing PIN code on the device. Keep the Bluetooth off in public places, including restaurants, stores, airports, shopping malls, train stations, etc. If anything unusual is seen on the device, users can move to a new location to avoid this type of attack. When using Bluetooth, set the device to the hidden, or the non-discoverable mode.

Bluesmack attack is done on which technology?

Which tool is used in this attack?

OS Command Injection is a form of shell injection attack, mostly used for execution of unauthorized OS commands in the operating system (OS) to target the system (usually a web server) and degrade its performance. In this attack, the hacker aims to find and exploit some of the vulnerable application