In this article, I shall be explaining negative indexes in Python. But first, we have to know these prerequisites: iterables and indexing. Having a fair knowledge on these two are paramount to understanding how negative indexes works.
So we shall be looking at the following:

An iterable is an object that can be traversed over. Meaning you can go through all the elements contained in the object. Iterables are also capable of returning each element they contain one-by-one and the amount of elements they can contain is only limited by the memory size of the computer. Examples of iterables are:

Although Sets and Dicts are iterables, they do not have indices. Meaning that thier elements cannot be indexed unlike Lists, Tuples and Strings

Indexing in Python is performed on iterables. It is a means of getting individual elements within an iterable by the element's position. This enables you to get or remove a specific element within a selected iterable if that elements postion is known.
Elements in an iterable are normally positively indexed in Python, starting from zero (0) and going up to the tail or last element of the iterable.

Earlier, we mentioned that elements in a Python iterable are positively indexed by default. The reverse is also possible here as they can be negatively indexed as well, starting from -1.
Negative indexes in Python works completely differently from positive (or zero-based) indexes. With negative indexes, elements are returned from the end of the iterable, with the last element having a value of -1. As negative indexes are used to get or remove an element starting from the back of the iterable, they are very useful in slicing.

Slicing in Python is the means of accessing parts of an iterable like strings, lists and tuples. 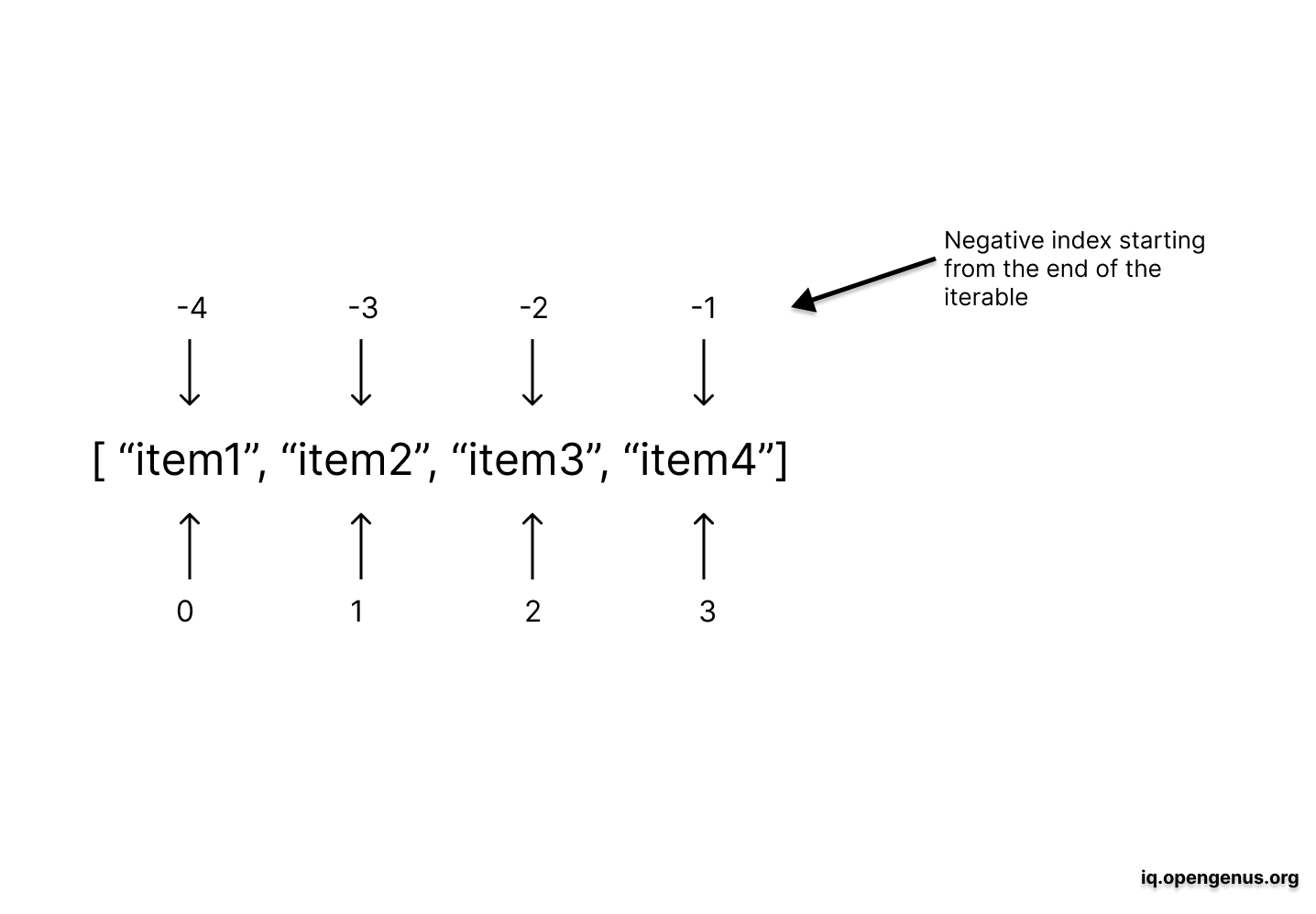 In the code examples, we shall be using the list iterable as a preferred choice. The same example also works for tuple and str (string) iterables.

1. Returning elements in a list iterable with negative index

In this example, we define and initialize test_list and using the negative index to get the last 3 values, 6, 5, 4 was printed vertically on the screen.

2.Removing elements in a list iterable with negative index

Using the builtin function pop(), we can remove any element from the list to get a new list.

This will not work for the tuple iterable since they are immutable. meaning that thier values cannot be changed or removed.

In this example, we defined a list and sliced it to create a new list. The slicing was done from the last element (exclsuive) to the fifth to last element (inclusive).

The syntax for slicing in Python is item[start:stop:step], with all of them being optional values if you just want the original list back after slicing (which is redundant and probably best to avoid).

4. Reversing the order of a list iterable with negative index

In this example, we reversed the list to display the last element first and the first element last using a negative index step of -1. This is required in order to traverse through the list from the back in steps of 1.

Negative indexing has a lot of advantages in programming. Some of these benefits include:

Which iterable cannot be indexed in the options below?

In negative indexing, the last element of an iterable has an index value of what?

Every day in this world data is generating at the rate of 2.5 quintillion bytes per second. The field of Data Science tries to explore the insights we can gather from the data how can we predict the future or how one organization can improve its efficiency by acting on that data.

In this article, we have explored the concept of typedef struct in C Programming Language which brings in two core concepts. We have explained the ideas with code examples and differences between typedef struct and struct.