I will cover those popular metrics used in Classification and Regression scenarios which come under the Supervised Learning.

Regression analysis is a subfield of supervised machine learning. It aims to model the relationship between a certain number of features and a continuous target variable. Following are the performance metrics used for evaluating a regression model:

where yᵢ is the actual expected output and ŷᵢ is the model’s prediction.
It is the simplest evaluation metric for a regression scenario and is not much popular compared to the following metrics.

Here, the error term is squared and thus more sensitive to outliers as compared to Mean Absolute Error (MAE).

Since MSE includes squared error terms, we take the square root of the MSE, which gives rise to Root Mean Squared Error (RMSE).

R-squared is calculated by dividing the sum of squares of residuals (SSres) from the regression model by the total sum of squares (SStot) of errors from the average model and then subtract it from 1.

R-squared is also known as the Coefficient of Determination. It explains the degree to which the input variables explain the variation of the output / predicted variable.

The limitation of R-squared is that it will *either stay the same or increases with the addition of more variables, even if they do not have any relationship with the output variables. *

To overcome this limitation, Adjusted R-square comes into the picture as it penalizes you for adding the variables which do not improve your existing model.

Hence, if you are building Linear regression on multiple variables, it is always suggested that you use Adjusted R-squared to judge the goodness of the model.

If there exists only one input variable, R-square and Adjusted R squared are same.

Classification is the problem of identifying to which of a set of categories/classes a new observation belongs, based on the training set of data containing records whose class label is known. Following are the performance metrics used for evaluating a classification model:

To understand different metrics, we must understand the Confusion matrix. A confusion matrix is a table that is often used to describe the performance of a classification model (or "classifier") on a set of test data for which the true values are known. 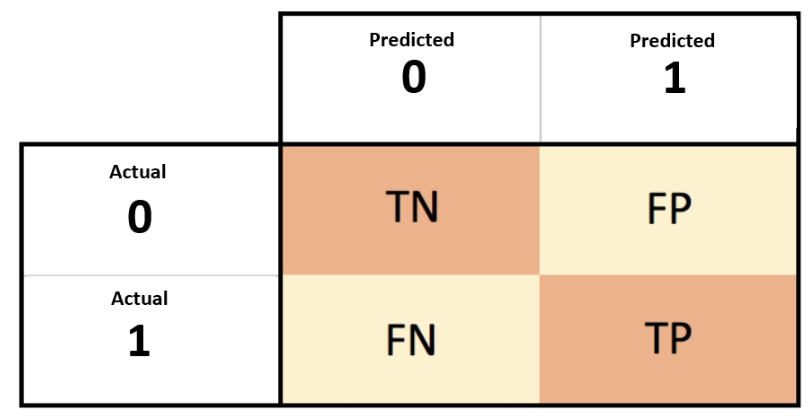 Consider the following values for the confusion matrix-

Accuracy is defined as the ratio of the number of correct predictions and the total number of predictions. It lies between [0,1]. In general, higher accuracy means a better model (TP and TN must be high).

However, accuracy is not a useful metric in case of an imbalanced dataset (datasets with uneven distribution of classes). Say we have a data of 1000 patients out of which 50 are having cancer and 950 not, a dumb model which always predicts as no cancer will have the accuracy of 95%, but it is of no practical use since in this case, we want the number of False Negatives as a minimum. Thus, we have different metrics like recall, precision, F1-score etc.

Recall is a useful metric in case of cancer detection, where we want to minimize the number of False negatives for any practical use since we don't want our model to mark a patient suffering from cancer as safe. On the other hand, predicting a healthy patient as cancerous is not a big issue since, in further diagnosis, it will be cleared that he does not have cancer. Recall is also known as Sensitivity.

F1-score is a metric that combines both Precision and Recall and equals to the harmonic mean of precision and recall. Its value lies between [0,1] (more the value better the F1-score). 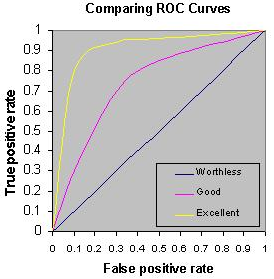 AUC (Area Under The Curve)- ROC (Receiver Operating Characteristics) curve is one of the most important evaluation metrics for checking any classification model’s performance. It is plotted between FPR (X-axis) and TPR (Y-axis). If the value is less than 0.5 than the model is even worse than a random guessing model.

Thus, depending upon the type of your problem (regression or classification), you can use some of these famous metrics in order to evaluate the performance of your predictive model.

Placing an array in a register can improve performance significantly but only statically allocated array can be placed in a register explicitly as we cannot deal with memory location directly. We have explained this in detail.