As the name suggests, classifying texts can be referred as text classification. Usually, we classify them for ease of access and understanding. We don't need human labour to make them sit all day reading texts and labelling categories. We have Machines !!

How can we classify?

The trick here is Machine Learning which requires us to make classifications based on past observations (the learning part). We give the machine a set of data having texts with labels tagged to it and then we let the model to learn on all these data which will later give us some useful insight on the categories of text input we feed.

The general workflow for this task can be described as, 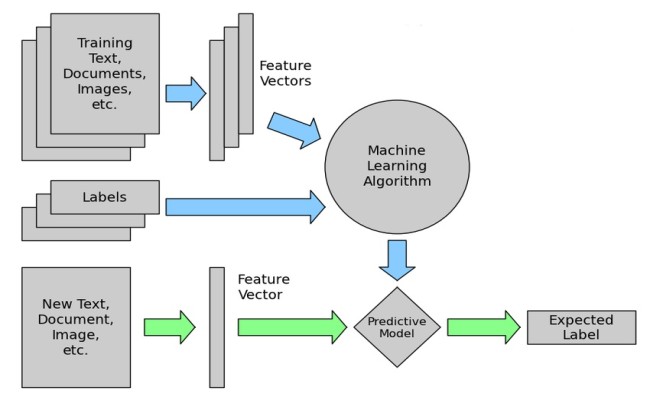 We are going to use Naive Bayes algorithm to classify our text data. 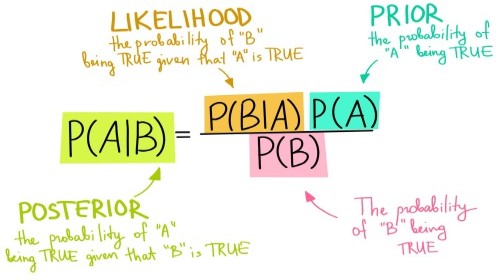 Consider we have data of student's effort level(Poor, Average and Good) and
their results(Pass and Fail).

Student will fail if his efforts are poor. We want to check if this statement is correct. Then we can use Bayes Theorem as,

P(Fail | Poor) is read as Probability of getting failed given that the effort was poor.

This is a higher probability. We use a similar method in Naive Bayes to give the probability of different class and then label it with the class having maximum probability.

Let's take an example, where we want to tell if a fruit is tomato or not. We can tell it's a tomato from it's shape, color and diameter(size). Tomato is red, it's round and has about 9-10 cm diameter. These 3 features contribute independently of each other to the probability for the fruit to be tomato. That's why these features are treated as 'Naive'.

Counting how many times each attribute co-occurs with each class is the main learning idea for Naive Bayes classifier.

How to use Naive Bayes for Text?

In our case, we can't feed in text directly to our classifier. Texts are huge, they have lots of words and various combinations so we use occurences of words in a single text data(i.e. term frequency-tf) and how many times that word comes across all text data (i.e. inverse document frequency-idf) and then we can generate feature vectors.

Feature vectors representing text contains the probabilities of appearance of the words of the text within the texts of a given category so that the algorithm can compute the likelihood of that text’s belonging to the category.

Once we are done finding likelihoods of various categories we find the category having maximum likelihood and there we have categorized our text!

For example, let's say you have a data set as :

We can predict the class of last data by using Naive Bayes by considering the probability of important words,

Important words for com.graphics from the data can be considered as,
{Nvidia, GPU, AMD, GTX 1050}

Here, we have considered only one word GPU that is important in our test data but in real data we'll consider feature vectors of all words and then compute the probability for the class based on the occurences of all the non primitive words.

The main advantage is that you can get really good results when data available is not much and computational resources are scarce.

For this task, we'll need:

Once you are done with this, let's install some packages using pip, open your terminal and type in this.

Now, we are ready to get our hands dirty on the script

Here, we are importing the famous 20 News groups dataset from the datasets available in sklearn.

Now, we define the categories we want to classify our text into and define the training data set using sklearn.

We defined our task into several stages in the beginning. Here we are pre-processing on text and generating feature vectors of token counts and then transform into tf-idf representation.

We fit our Multinomial Naive Bayes classifier on train data to train it.

Predict the output of our input text by using the classifier we just trained.

We now finally evaluate our model by predicting the test data. Also, you'll see how to do all of the tasks of vectorizing, transforming and classifier into a single compund classifier using Pipeline.

With this, you have the complete knowledge of using Naive Bayes classifier from Text Classification tasks. Enjoy.

Gradient Boosting is a machine learning algorithms used to predict variable (dependent variable). It is used in regression and classification problem.