In this article, we will learn about pre-trained model PoseNet in detail which will be consisting of need and working of posenet,operations possible on it,its application, and possible improvement over existing posenet model.

What will we learn:

Posenet is the Pre-trained model used as post detection technique which can detect the human beings poses in the given video and images. In other words, Posenet is the deep learning tensorflow model which tells about the human pose by estimating the parts of the body designated as key points(which are 17 in total for this model) namely being nose,right elbow,right wrist etc which are connected with each other to form skeleton structure of the body and giving all the points confidence score as the model only estimates them to recognize a pose.

Note: ml5.js,ps5.js will work in browser as it is with nearly no knowledge of python required for the same while If you want to implement using python, tensorflow.js is a way to go which also works in browser but only difference being provides python support in it.

Some Perks of PoseNet model!!!
Also, Posenet being a lightweight model which uses depthwise seperable convulation to deepen the network by reducing the parameters,computation cost whcih in turn increases the accuracy of the model. Thus, being lightweight model it easily runs on the web browsers i.e. posenet is pretrained model that can be run on the browsers. This seperates it from other API dependent libraries making use of this model extensively on the variety of models with anyone having limited configration in a laptop or a personal desktop.

Posenet uses a total of 17 key points ranging from our eyes , ears to the ankles and knees also including the wrist,elbow,shoulder,nose as well.

If image given to posenet is not clear , then it returns the confidence score telling how much confident it is guessing the particular pose in the image.This is done in form of JSON response.

The pose estimation happens when the input RGB image is processed through Convolutional neural network on which either multiple poses or single pose algorithmn is applied which give model outputs via stating the pose in the image, its pose confidence scores,keypoints positions and its keypoints confidence scores.
Let's look at each keyword one by one:

All the points are shown below in the image [Fig(A)]: 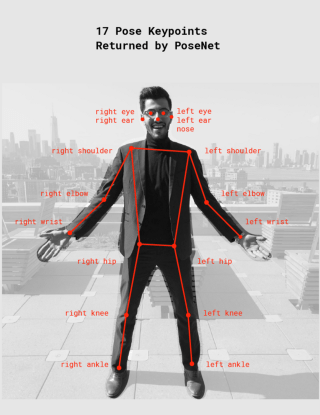 Often losing track due to motion blur,high speed rotations,partial occulsions and presence of dynamic objects in the scene. Making them unsuitable for cases like unmanned aerial vehicles.

In this section, we will understand the Architecture of Posenet and details of it. 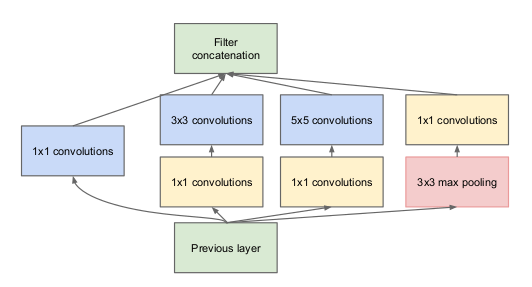 Rectified Linear units: whose output being f(x)= Max(0,x).Its precise use being better performance than others non-linear functions like: sigmoid,tanh and also, CNN can learn about non-linear values which makes its usable for real-world

Being the last layer of CNN, it takes the output by convulational process as input and applies linear transformation many times and finally a activation function for predicting class of image.

But, In posenet the softmax layers (which help in classification of images) is replaced by 2 parallel fully connected layers with 3 or 4 units respectively.These are generally regress to pose(demonstrated to (x,y,z) coordiantes) and orientation(represented as quaternion). Additionally , it adds 2048 units fully connected layer on the top of the last inception module

Here the feature map matrix with converted as vectors <x1,x2,x3,x4.....>. With the help of full connected layers and combining them we create the required model.Then, by using Sigmoid,softmax,ReLu we get the classes of the object inputted in the model. Although, softmax is replaced 2 parallel fully connected layers with 3 or 4 units respectively.These are generally regress to pose(demonstrated to (x,y,z) coordiantes) and orientation(represented as quaternion).

Here, x shows groundtruth position and q shows orientation. As, quaternions are limited to unit manifold , the orientation error becomes minimum and smaller than position error. That's why ß is used to balance the loss terms which is a constant scale factor.
But, authors of Posenet replaced this constant scale factor which is adaptive to improving accuracy of network and loss function for camera pose regression.
The new loss function is formulated according to homoscedastic uncertainity:

Improvements over the architecture of Posenet

Some of the improvements that can be using more of localized sequences around the image via using the whole field-of-view as input which produces the best output and downsampling the frames of sequences and there being enough overlap between training and test data. Data augmentation can reduce the margin between the test and training data. And, by using LSTM cells (even of length 1) performs on average as good as for longer sequence lengths.This is helpful due to their relatively more complex archietcture compared to CNN's fully-connected layers which is even shown evidently on single image as input.

We can say that Posenet can be improved by giving field-of-view more importance than input image's resolution.Also, depending on the training labels one can cover more areas with more accuracy during the training time also gaining more accuracy on test time as well. Lastly, we can say LSTM cells are not that useful on temporal information as its invariant to small translations but they do perform better due to complex nature as compared to their counterparts fully connected layers.

We learned in this article at OpenGenus about posenet and why its needed over vSLAM algorithms. Also, we saw architecture of the posenet and how it can be improved via LSTM, increased field-of-vision,and data augmentation.Also , we learned about GoogleNet as well as operations on the posenet. Additionally , we also learned important keywords and loss function required in posenet.

Transposed convolution is also known as upsampled convolution, which refers to the task it accomplishes, which is to upsample the input feature map.