In this article we will briefly discuss about the travelling salesman problem and the branch and bound method to solve the same.

What is the problem statement ?

Travelling Salesman Problem is based on a real life scenario, where a salesman from a company has to start from his own city and visit all the assigned cities exactly once and return to his home till the end of the day. The exact problem statement goes like this,
"Given a set of cities and distance between every pair of cities, the problem is to find the shortest possible route that visits every city exactly once and returns to the starting point."

There are two important things to be cleared about in this problem statement,

What is branch and bound ?

Before going into the details of the branch and bound method lets focus on some important terms for the same,

The word, Branch and Bound refers to all the state space search methods in which we generate the childern of all the expanded nodes, before making any live node as an expanded one. In this method, we find the most promising node and expand it. The term promising node means, choosing a node that can expand and give us an optimal solution. We start from the root and expand the tree untill unless we approach an optilmal (minimum cost in case of this problem) solution.

How to get the cost for each node in the state space tree ?

To get further in branch and bound, we need to find the cost at the nodes at first. The cost is found by using cost matrix reduction, in accordance with two accompanying steps row reduction & column reduction.

For example, suppose we have a cost matrix as shown below, 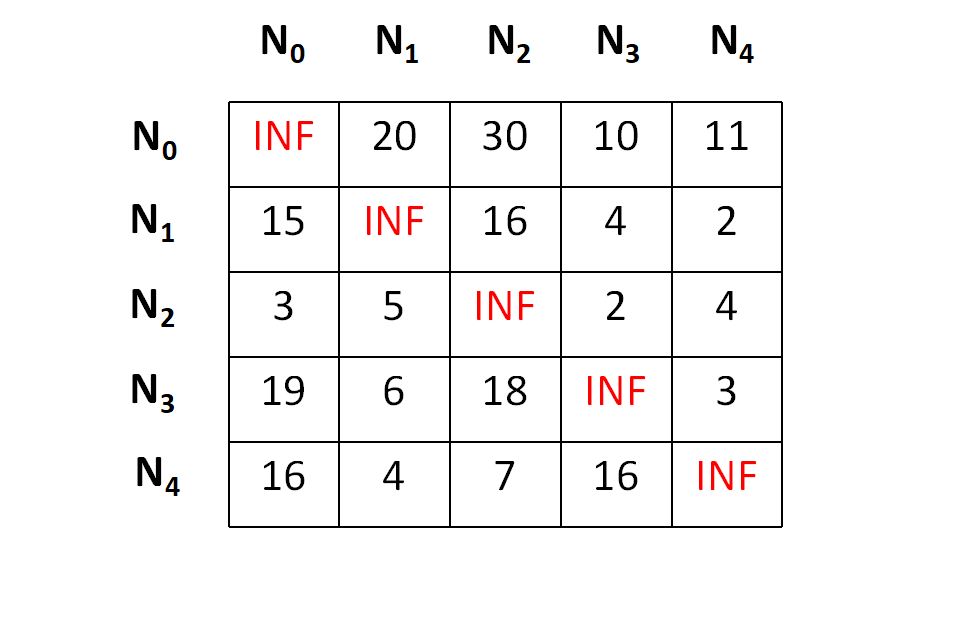 First of all we will perform the row operations and to do the same, we need to subtract the minimum value in each row from each element in that row. The minimums and the row reduced matrix is shown below, 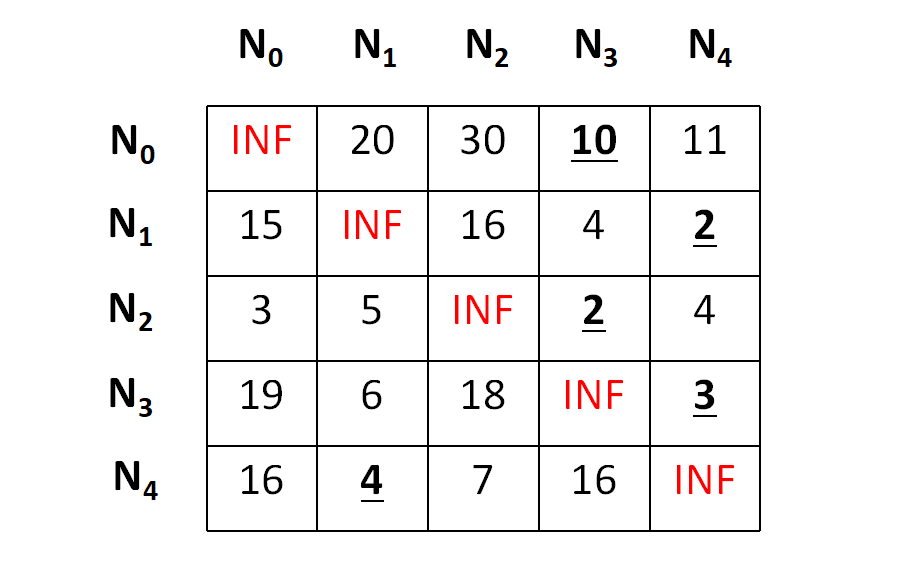 And after row reduction, 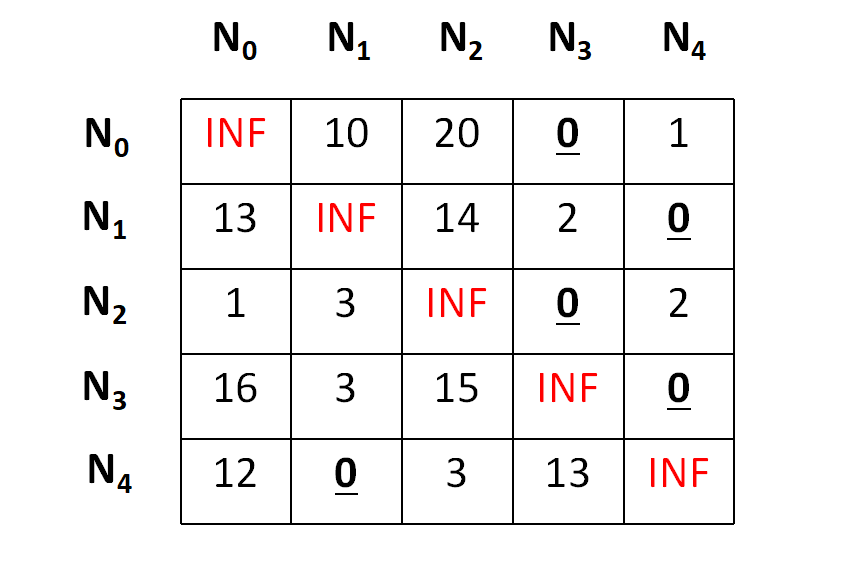 Now we need to perform the column operation in the same manner and we will get a final matrix as below, 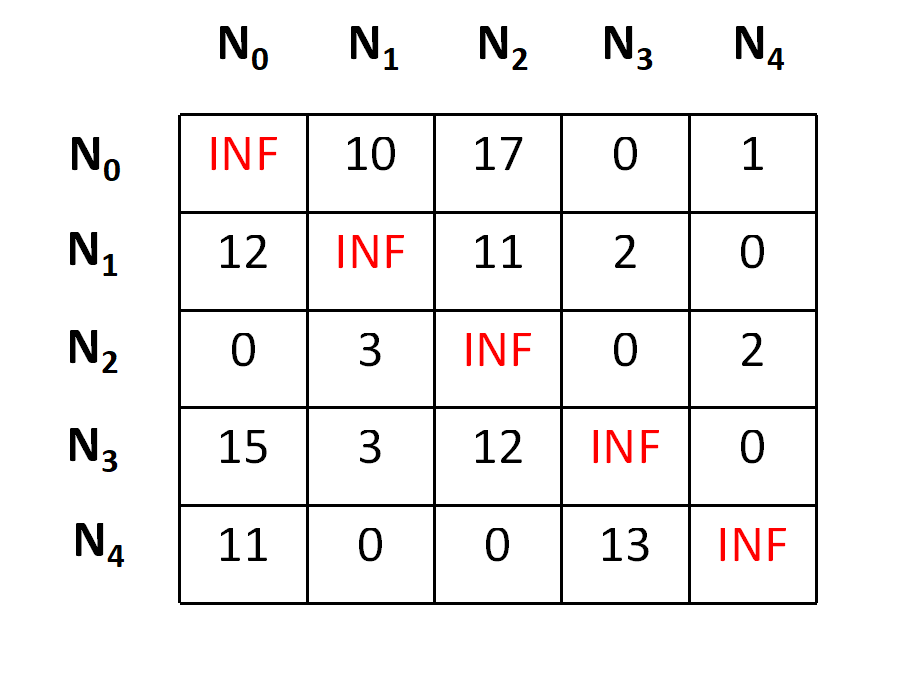 The total cost at any node is calculated by making a sum of all reductions, hence the cost for the node N0 can be depicted as,

Now as we have founded the cost for the root node, it's the time for the expansion, and to do so, we have four more nodes namely, N1,N2,N3,N4.

Let's add the edge from N0 to N1 in our search space. To do so, we need to set outgoing routes for city N0 to INF as well as all incoming routes to city N1 to INF.Also we will set the (N0,N1) position of the cost matrix as INF. By doing so, we are just focusing on the cost of the node N1, that's an E-node. In an easier note, we have just forgotten that the graph has a N0 node, but we are focusing on something that the graph has been started from the N1 node. Following the transformation we have something as below, 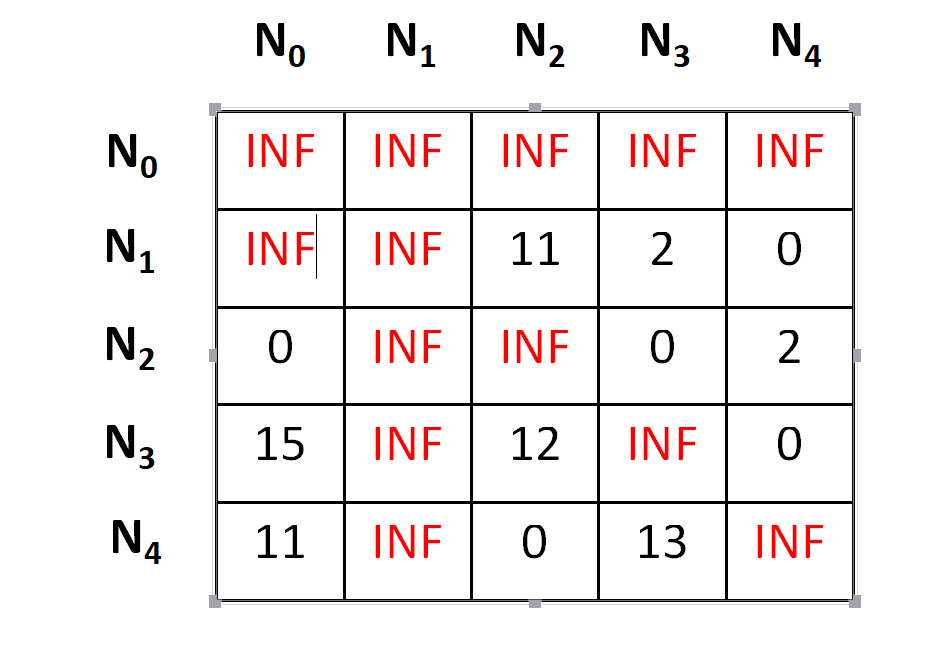 Now it's the time to repeat the lower bound finding(row-reduction and the column-reduction) part that we have performed earlier as well, following which we will get that the matrix is already in reduced form, i.e. all rows and all columns have zero value.

Now it's the time to calculate the cost.

Now we have a part of state space tree ready, whcih can be shown as below,

How to get towards the optimal solution ?

To get the optimal solution, we have to choose the next live node from the list of the extended nodes (E-nodes) and repeat the same procedure of extending the tree further by calculating the lower bound.
Here in the partially built space search tree above we have the Node N3 as the node having the minimum cost and we can consider it as the live node and extend the tree further. This step is repeated until unless we find a dead node and can not extend the tree further. The cost of the dead node (leaf node) will be the answer.
The entire space search tree can be drawn as follow, 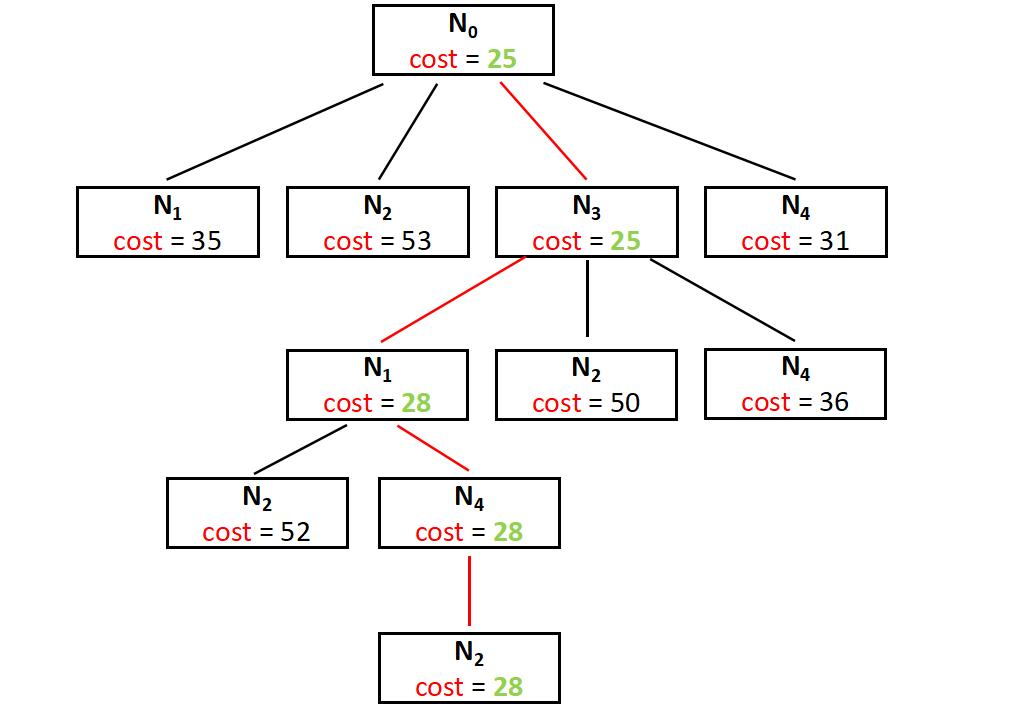 And the final cost is 28, that's the minimum cost for a salesman to start from N0 and return to N0 by covering all the cities.

Now after knowing the entire process, this thing is easier to code. We have tried something new this time by attaching some more datastructures and objects to print the path as well. Have a look at the following code in order to understand it,

We would briefly go through the three main functions of the algorithm and try to understand how the algorithm is working, which is pretty similar to what we have learbed above.

As the name suggests, this function is used to reduce the desired row. In this function we are using an awesome builtin function namely fill_n() available in the C++ STL.
Have a look at the syntax,

This function makes it easy to fill an entire row with the desired value(INF here).

Now it's time to run two loops, one for the minimum value finding for each row and one for making the reduction. Have a look at the below snippet of the code.

As the name suggests, this function is used to reduce the desired column, in a similar fashion to what we have done above.

This function makes it easy to fill an entire column with the desired value(INF here).

Now it's time to run two loops, one for the minimum value finding for each row and one for making the reduction. Have a look at the below snippet of the code.

This function need to get the reduced matrix as a parameter, perform the row reduction, the column reduction successively and then calculate the cost.

This can been seen below.

The time complexity of the program is O(n^2) as explained above for the row and column reduction functions.

What is the final time complexity ?

Now this thing is tricky and need a deeper understanding of what we are doing. We are actually creating all the possible extenstions of E-nodes in terms of tree nodes. Which is nothing but a permutation. Suppose we have N cities, then we need to generate all the permutations of the (N-1) cities, excluding the root city. Hence the time complexity for generating the permutation is O((n-1)!), which is equal to O(2^(n-1)).

Hence the final time complexity of the algorithm can be O(n^2 * 2^n).

Move semantics is moving ownership of objects around and this includes concepts of move constructor.

in HTML is the parent tag, that contains each and every element tags of the HTML document inside of it, except for the tag.