UEFI (Unified Extensible Firmware Interface) is the interface between the operating system and the low-level initialization firmware. It initializes hardware components and is responsible for executing the OS stored in a boot device.

EFI/UEFI defines an interface between the operating system and low-level initialization firmware.

It is comprised of data tables containing platform-related information, boot and run-time service calls available to the operating system and its loader.

It is an improvement over BIOS in that;

The EFI specification was made a general standard now known as UEFI.

To understand UEFI, let's remember what we learned about BIOS, during startup BIOS reads the first sector of the bootable such as an HDD or USB to find the next jump instruction which has the location of the code(boot loader) to be executed.

On the other hand, UEFI works with an .efi file that is used to store all initialization and startup information that was previously etched into the firmware.
This file is stored in the EFI System Partition(ESP) that will also store boot loaders for the OS.

UEFI is a replacement for BIOS because of its great features that cannot be implemented with BIOS. Some include;

UEFI is platform-independent therefore we can improve the boot time and speed of a computer, this is useful when we have large drives.

Programmers can also use the UEFI shell to execute commands from other UEFI apps thereby optimizing the system performance.

Speed and performance all depend on the configuration of UEFI.

UEFI prioritizes security compared to BIOS. It comes with secure boot whereby it only allows authentic drivers and services to load at boot time. This is a good way to prevent malware from being loaded to the OS.

Secure boot in Windows is the reason why it is difficult to install another operating system on a windows machine.

While BIOS uses the MBR, UEFI uses GPT(GUID Partitioning Table). The former, MBR, uses 32-bit entries in its table meaning that we can only have 4 physical partitions(not logical).

With GPT, it uses 64-bit entries in its table and this extends the support for larger sizes.

UEFI also supports larger HDDs and SDDs i.e > 9 zettabytes while BIOS can only boot from <= 2.2 TB.

This stage has all the processor initialization code written in assembly code and is responsible for the following;

At this stage, the configuration of the entire platform, loading, and booting of the DXE(Driver Execution Environment) happens.

UEFI now loads drivers for configured devices. When control is transferred to the OS, DXE runtime stays resident so that it can handle any calls to the UEFI from/to the operating system.

This stage is implemented as part of the BDS architectural protocol, It is responsible for; initializing console devices, loading drivers, loading boot selections, and executing them.

TSL is the primary boot loader provided by the OS vendor. Both of these stages TSL and RT allow access to persistent content via the UEFI drivers and applications.

This phase consists of persistent UEFI drivers that store the state of the system during an orderly sleep, hibernate, restart, or shutdown. 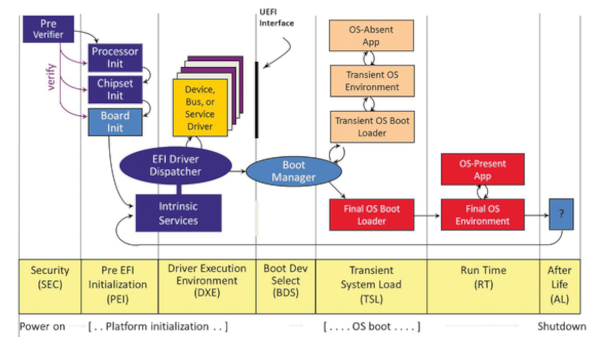 UEFI is platform-independent. Therefore, manufacturers don't concern themselves with a specific OS that might run on the computers.

The UEFI configuration is stored in a specified ESP partition mounted at /EFI and not etched directly in the hardware.

With UEFI, there is no need for a boot loader such as GRUB.
All these features make UEFI the superior interface compared with legacy however, there are cases when BIOS is preferred for example, when we need to dual boot or when we have less than 2TB of storage space.

In this article, we have solved the problem of finding elements that appear more than N/3 times. This involve ideas of Hash Map and Boyer Moore algorithm.