We discuss BIOS - firmware stored in non-volatile memory e.g EPROM, responsible for performing startup procedures such as POST before passing control to the bootloader which loads the OS.

Power On Self Test(POST), is the self-diagnostic test that a computer will perform during startup to make sure that the hardware does not have any issues.
This test is the first phase of a boot sequence even before the OS is executed, the program that carries this out is referred to as the BIOS.

Other than POST, BIOS is also responsible for other tasks, for example, after it is done with the POST test, it passes control to the bootloader such as GRUB which loads the OS into memory - this is a very crucial step during boot up.
With the BIOS we can, we can manage many low-level system settings such as; 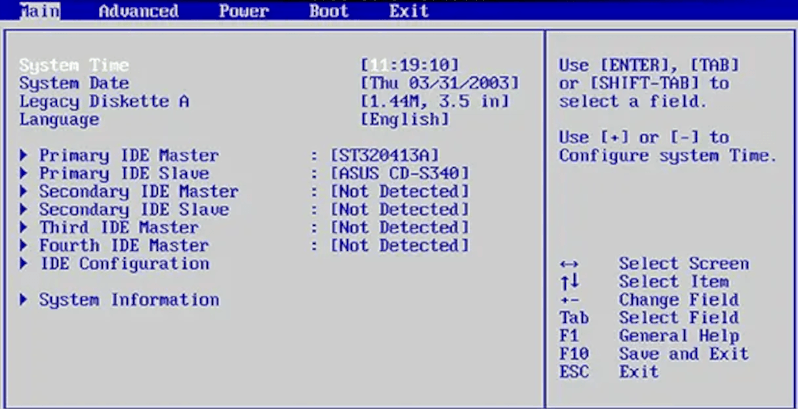 BIOS also comes with its low-level drivers which handle all the basic control operations over the hardware.

In Linux, to view the BIOS version we use the dmidecode command, it works with i386, x86-64, arm64 and ia64 processor architectures:

To print all information related to BIOS we write:

As we have seen in the prerequisite article, firmware can be updated, that is, we can update the BIOS to fix bugs, add features to support a specific processor, improve performance and stability.

It is important to be cautious during this process since if something goes wrong for example power is lost in the process could mean that the computer cannot boot because the only thing that boots it is corrupted.

First, we have to download a very specific firmware that corresponds to your motherboard from the manufacturers' website.
Next, we load it onto a USB stick and boot the computer.
We then enter the BIOS configuration and update it.

It is also wise to have the original BIOS before we perform this process so that if anything goes wrong we can revert to the original. This is usually handled by the vendor-specific firmware updating software.

In Linux, to update BIOS on a Lenovo think pad we write:

BIOS is stored in non-volatile memory such as EPROM(erasable programmable read-only memory) or flash memory.

With BIOS we can manage a lot of the basic system settings such as boot drives, dates and times, password configurations, virtualization and more.
Popular BIOS vendors include IBM, American Megatrends, BYOSOFT, DELL.

In this article we discuss firmware - software that is directly programmed into hardware devices such as routers, cameras, network cards etc.