An immutable object is an object whose internal state remains constant after it has been entirely created.This means that the public API of an immutable object guarantees us that its behaviour will remain same and will not change during its whole lifetime.

The above code can be understood with the help of the diagram given below: 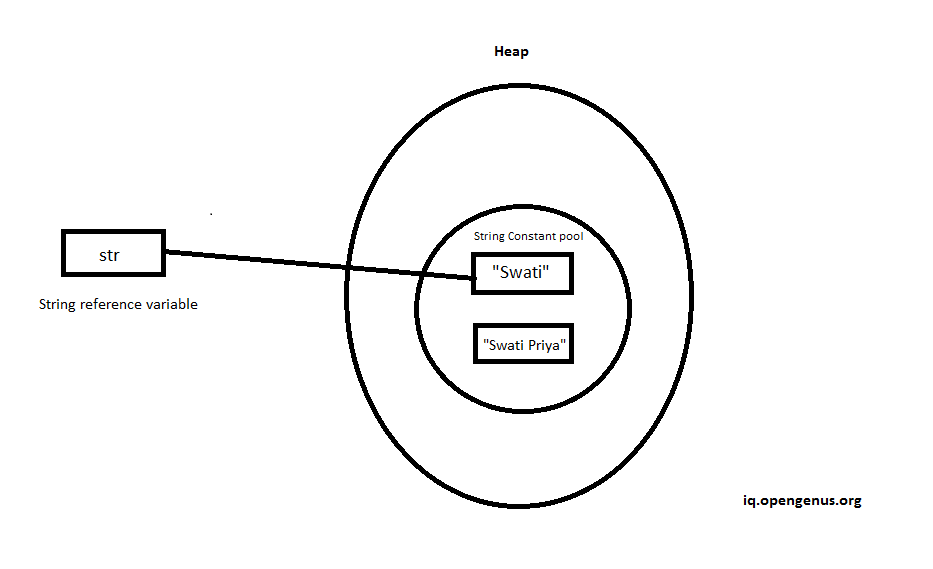 Here "Swati" is not changed but a new object is created with "Swati Priya". That is why string is known as immutable.Also, you can see in the figure that two objects are created but str reference variable still refers to "Swati" not to "Swati Priya".

But if we will explicitely assign it to the reference variable, it will refer to "Swati Priya" object but still the "Swati" Object will not be modified.

The advantages of having Strings as immutable in Java includes:

We will explore each of the benefits in depth now.

As seen earlier in Caching,We can save a lot of Heap Memory Space as duplicate string objects are not allowed because of the string's immutability feature.
Also,the hash implementations using strings saves a lot of time as we don't need to calculate hashcode for the string literal having same value.

Thus, both memory optimization and faster access is obtained which automatically ensures the better performance of the whole application in general.

String's immutability feature makes it safe for multithreading as it won't change even if it is accessed from multiple threads.

Thus, in general, the immutable objects can be shared across multiple threads running simultaneously.Even if the thread changes the value of the string then the new string object will be created in the string pool and the existing string will not be modified.Thus, the strings are thread safe because of its immutability feature.

The String is widely used in Java Application to store important informations like username,password,etc.

username and password is passed as a string in the database to get the database connection and also in socket programming port details and host are passed as a string.Had the string been mutable it would have been possible for the hacker to access our personal data and also change the referenced value to cause security threats to our application.

It is also used by Java Virtual Machine (JVM) class loaders while loading classes.So, immutability provides the guarantee that correct class is getting loaded by the Classloader.

If the strings were mutable then in the above code, the attacker would have passed a good url and then changed it to a attack url which can cause serious security issues.

Thus,to ensure the security of the whole application it is crucial to secure the Strings.

Thus, with this article at OpenGenus, these are the reasons which answers the question "why String is immutable in Java".If you think there are some reasons then comment down in the discussion section given below.

In this article, we have built basic static webpage application in Flask with no database. This results in a high performance webpage with a lightweight web server which is the direct result of not adding a database.

pv is a terminal-based (command-line based) tool in Linux that allows us for the monitoring of data being sent through pipe. The full form of pv command is Pipe Viewer.

OpenGenus IQ: Computing Expertise & Legacy
—
Why String is immutable in Java?
Share this