In this article, we are given a sorted list of words in some alien dictionary. Based on the list, we have to generate the sorted order of characters in that alphabet. This problem can be solved using the idea of Topological Sort and Direct Acyclic Graphs. So, let's begin!

This is similar to Leetcode problem 269. Alien Dictionary.

Topological Sort in a directed acyclic graph is a sorted order of vertices in which if u--->v is a directed edge in the graph from u to v, then u comes before v in the sort.

Suppose we have a graph: 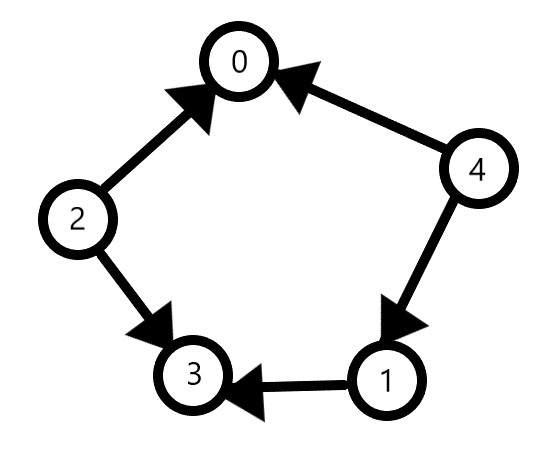 A graph can have multiple possible topological sorts. The algorithm for finding the topological sort uses the depth first traversal and a queue data structure as well as an indegree array, which stores the number of edges which are directed inward to a particular vertex.

Let us quickly see the C++ implementation for this:

What we are supposed to do

Repeat these observations for all the other test-cases to gain a proper understanding of what we are aiming to achieve.
In case of test-case 3, we have "aa" and "aaa". In dictionary order, the shorter word "aa" comes before "aaa". 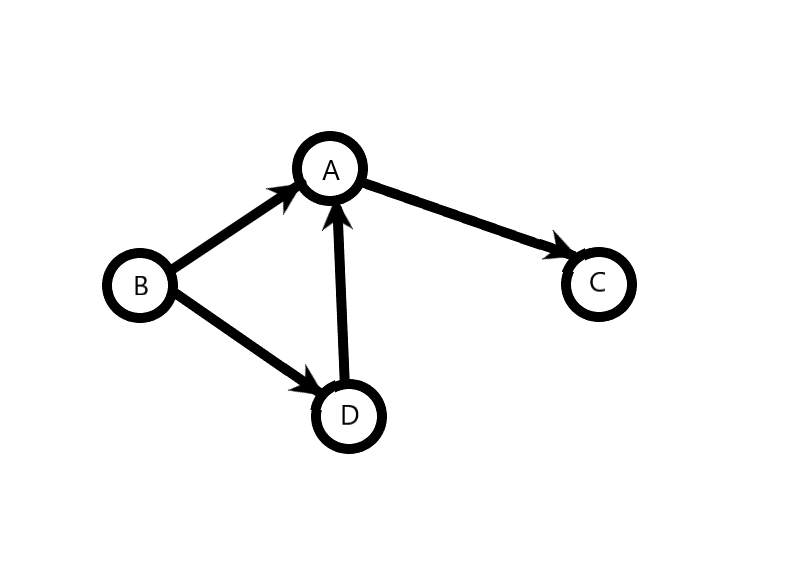 After this, we are going to apply the topological sort on the graph to find the order of characters in the dictionary. We get B D A C, which is the required solution.

Let us look through the C++ implementation of this. First up, we have the function find_order(), which takes in two parameters, the array of strings given[] and the number of strings n. It traverses the array, compares consecutive strings and when a character mismatch is found, adds the edge to the graph g, which we are implementing using an unordered map.

In the return statement we have called the function toposort(), which we shall define now. toposort() takes in two parameters, an adjacency list g and the string array given[].

It uses a map to store the indegree of the characters in the graph and a queue data structure to implement topological sort. It returns a string ans which is the solution.

The function first calculates the indegree of every character. Then, all vertices with indegree 0 are pushed into the queue. Then, topological sort is begun, the adjacency list is traversed and indegree of all visited vertices is decreased by 1 with each visit. If indegree becomes 0, it's inserted in the queue. Every letter popped from the queue is appended to the string ans which is initiated with "".

Notice the code segment titled "For Unary Languages". Unary languages are those which have only one letter in the aplhabet. Example, the test-case "aa","aaa","aaaa". Here, since only one character is used, we cannot have a possible directed acyclic graph. This implies that our topological sort shall fail and we will be returned "" as the answer.

But we know that the alphabet consists of the letter 'a'. To account for this, we add the given if condition.

Let's take a look at our overall code:

The output received is bdac which is the correct solution.

In our approach, let n be the number of words given and m be the no. of characters in each word. Then, when we compare consecutive words for mismatches, every word is compared to this predecessor and successor, character by character. So, the time complexity for this comparison will be of the order of total number of characters in the words i.e. O(m * n).

Firstly, when we create the graph using adjacency list, the time complexity will be O(vertices + edges). Here, vertices will be d, the number of characters in the alphabet and edges will be n-1 at most, where n is the number of words given. So, space complexity is O(d+n-1) = O(d+n).

This is followed by topological sort, where we use a map indegree, which will take O(d) space and a queue, which will also take around O(d) in the worst case. So, space complexity for sorting is O(d) + O(d)= O(d).

Thus, in this article at OpenGenus, we have solved the alien dictionary problem using concepts of directed acyclic graphs and topological sorting. Keep learning!

In this article, we have explored approaches to solve the maximum string partition problem (Partition Labels) efficiently.

In this article, we have explained three approaches to solve the Shortest Superstring problem. This involve concepts like DFS and Dynamic Programming.