Here, statement(s) may be a single statement or a block of statements. The condition may be any expression, and true is any non-zero value. The loop iterates while the condition is true.

When the condition becomes false, program control passes to the line immediately following the loop.

In Python, all the statements indented by the same number of character spaces after a programming construct are considered to be part of a single block of code. Python uses indentation as its method of grouping statements. 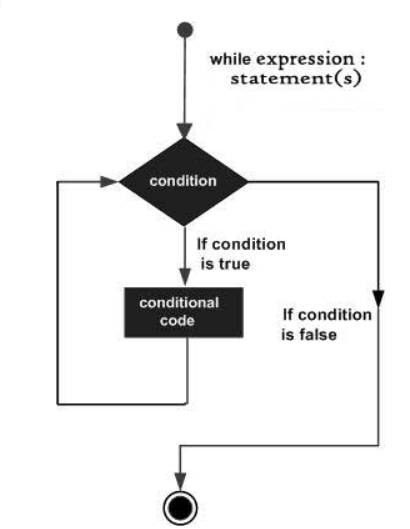 Here, key point of the while loop is that the loop might not ever run. When the condition is tested and the result is false, the loop body will be skipped and the first statement after the while loop will be executed.

The Infinite while Loop in Python

An infinite loop might be useful in client/server programming where the server needs to run continuously so that client programs can communicate with it as and when required.

Above example goes in an infinite loop and you need to use CTRL+C to exit the program.

Using else Statement with Loops

Python supports to have an else statement associated with a loop statement.

The following example illustrates the combination of an else statement with a while statement that prints a number as long as it is less than 5, otherwise else statement gets executed.

Similar to the if statement syntax, if your while clause consists only of a single statement, it may be placed on the same line as the while header.

Here is the syntax and example of a one-line while clause:

Note: It is suggested not to use this type of loops as it is a never ending infinite loop where the condition is always true and you have to forcefully terminate the compiler.

While and Do While are two types of loops that are supported in Kotlin and we will learn about them in this article.

In Java, a constructor is a block of code similar to a method which is used to initialize objects. It is called when an instance of a class is created.

OpenGenus IQ: Computing Expertise & Legacy
—
Learn about While loop in Python
Share this