In this article, we see why adversarial examples are not bugs but are features of Machine Learning models.

Adversarial examples are aberrations that arise because of

Why do adversarial perturbations arise?

As classifiers are trained to only maximise distributional accuracy, they use any available signal to do so regardless of whether it is comprehensible to humans, as they are indifferent to any other predictive feature. The "non-robust" features can lead to adversarial perturbations.

In order to manipulate the features of networks which may be complex and high-dimensional, a robust model can be leveraged and the dataset modified to contain only relevant features

The below table shows the test accuracy of classifiers trained on the D, D_rand and D_det training sets 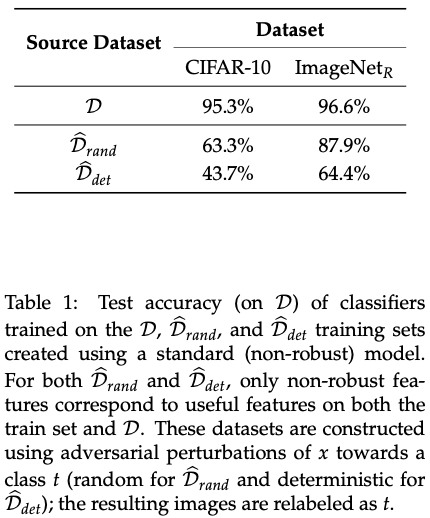 Non-robust features are useful for classification in the standard setting, as standard training on the above datasets generalise to the original data set 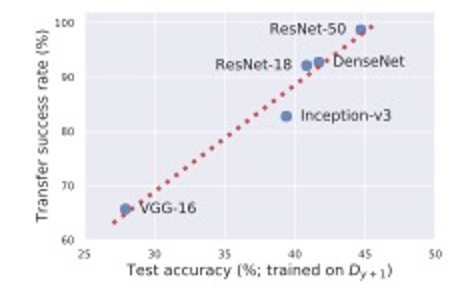 The above figure demonstrates the transfer rate of adversarial examples from a ResNet-50 to different architectures alongside test set performance of these architecture when trainined on the dataset generated in Section 3.2. Architectures more suspectible to transfer attackes also performed better on the standard test set supporting the hypothesis that adversarial transferability arises from utilising similar non-robust features.

Transferability can arise from non-robust features

Hypothesis: Architectures which learn better from this training set compared to the standard test set are more likely to learn similar non-robust features to the original classifier

the goal is to learn parameters Theta = (mu, Sigma)

Classification under this model can be accomplished via likelihood test: for unlabeled sample x, we predict y as

Robust analogue of this problem arises from l(x; y.mu, Sigma) with the NLL under adversarial perturbation

This outlines and evaluates the potential of a new approach to build indexes that is the merge of Algorithms/ Data Structures and Machine Learning.

Indirect Convolution is as efficient as the GEMM primitive without the overhead of im2col transformations - instead of reshuffling the data, an indirection buffer is introduced.

OpenGenus IQ: Computing Expertise & Legacy
—
Adversarial Examples are not Bugs but are Features of AI
Share this