In this article, we have discussed about Context Switching, which is one of the most important and fundamental topics in Operating Systems.

But before we discuss Context Switching, we must know what we refer to as a context with respect to Operating Systems.

When a process is removed from the processor, information about process must be stored such that when it is scheduled to run on the processor later, it can continue it's operation from the same state.

This operational state data is called as context.

The best way to visualise it is to think that what context is to a process is what a bookmark is to a book.

The purpose of a context is to be useful when the processor returns to the process.

What is the context switching in the operating system?

Have you ever wondered how multitasking processors handle multiple processes simultaneously, and when you go back to any of the processes, it starts from the same point where it was left?

This is possible because of Context Switching.

Context Switching helps store the context of a process, thread, or state, which can be accessed at the same point when reloaded.
Tt allows multiple processes to share the same CPU at a single given point of time, making it a multitasking feature.

Context switching helps in sharing a single processor across all processes to complete its execution and store the task status.
When the process reloads, the process executes at the same point where there was conflict.

For the sake of ease, we will mostly refer Context Switching for processes in this article.

The need for Context switching

The switching of one process to another process is not direct.
Context switching helps the system that is switching between the processes to use the CPU's resources to store its context.

We can resume the service at the same point later. We have to store the currently running process's data or context otherwise the stored data may be lost while switching between processes.

Ready queue in Operating Systems keeps a set of all processes residing in main memory, ready and waiting to execute in a line. A new process is always put in this queue.

For processes, using I/O (Input/Output) devices can be expensive. A process running and using I/O resources will hold up the processor for other processes.

If a process requires I/O resources in the system, the current process will be switched by another process to use the CPUs.

And when the requirement is met, the old process goes into a ready state to wait for its execution.

Context switching stores the state of the process for it to resume its tasks. Otherwise, the process needs to restart its execution from it's initial state.

An Interrupt is a signal emitted by a hardware or software when a process needs immediate attention. It alerts the processor in favor of a high-priority process requiring interruption of the current process.

If interrupts occur while a process is running in the operating system, the process status is saved as registers by context switching.

After resolving the interrupts, the process switches from a waiting state to a ready state to resume its execution from the same point.

Context switching allows a single CPU to handle multiple process requests simultaneously without the need for any additional processors.

The last but also one of the most important reasons.
Context switching allows a single CPU to handle multiple process requests simultaneously without it needing any additional processors.

There are three major triggers for context switching. These are given as follows −

A part of the context is switch by the hardware when an interrupt occurs. This happens automatically.

Only a part of the context is changed to reduce the time required to handle the interrupt.

In Operating Systems, the user mode is the default mode where a process has limited access to system resources.

While the kernel mode is the privileged mode where a process has unrestricted access to system resources.

A context switch takes place in transition between the user mode and kernel mode is required in the operating system.

What is the PCB?

All of this information is stored in the Process Control Block.

There are several steps involves in context switching of the processes.

The following diagram helps visualise the context switching of two processes, P1 to P2, when an interrupt occurs, it's I/O needs, or priority-based process occurs in the ready queue. 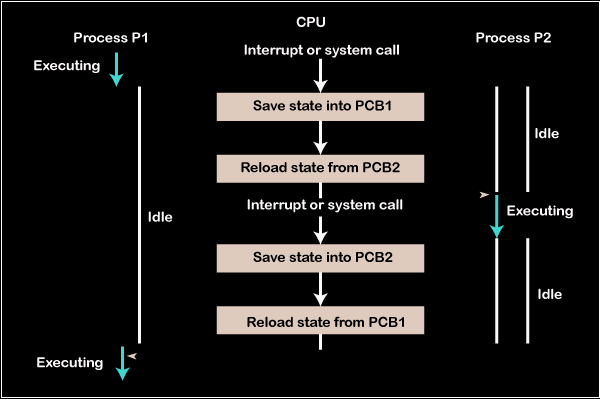 As we can see, initially, the P1 is running on the CPU to execute its task, and at the same time, P2, is in the ready state.

If an interruption occurs or the process requires I/O resources, the P1 process switches its state from running to waiting.

Before changing the state of the process P1, context switching saves the context of P1 in registers and the program counter to the PCB1. After that, it loads the state of P2 from ready state of the PCB2 to the running state.

The following steps are taken when switching P1 to P2:

Similarly, P2 is switched off from the CPU so that the P1 can resume execution. P1 is reloaded from PCB1 to the running state to resume its task at the same point.
If not, the information is lost, and when the process is executed again, it starts execution from it's initial state.

The disadvantage of Context Switching

A disadvantage with is that it has a cost in performance.

It is directly due to running the task scheduler, translate and the TLB flushes, and indirectly due to the sharing of the CPU cache between multiple tasks.

These costs are purely overhead. The processor is not useful for anything else while the context switching happens.

Difference between Swapping and Context switching

In this section we will discuss the difference between Context Switching and Swapping. But first we should first know what Swapping is:

Swapping is a memory management scheme in which any process can be temporarily swapped from main memory to secondary memory so that the main memory can be made available for other processes. It is used to improve main memory utilization. In secondary memory, the place where the swapped-out process is stored is called swap space.

The purpose of the swapping in operating systems is to access the data stored in the hard disk and bring it to RAM so that the applications can use it.
Swapping is used only when data is not present in RAM.

Which of the following can periodically trigger the context switch?

After reading this article at OpenGenus, you must now have a good understanding of Context Switching and the other related concepts.

You can understand the other aspects of Operating Systems much better that are based on this concept.

Vue is a progressive JavaScript front-end framework which was developed for creating user interfaces and it could be effectively used to develop Single Page Applications (SPAs).

We have explained the problem of finding Peak Element in an Array along with different approaches to solve it efficiently.