In this article, we have explored Different Pivot selection techniques in Quick Sort such as Median of Medians, Mode, First Element and much more along with Time Complexity of all methods.

Quicksort has been described as the "quickest" and the "most efficient" sorting algorithm present.

Quicksort is a sorting algorithm based on the divide and conquer technique i.e., it breaks down a problem into smaller subproblems. 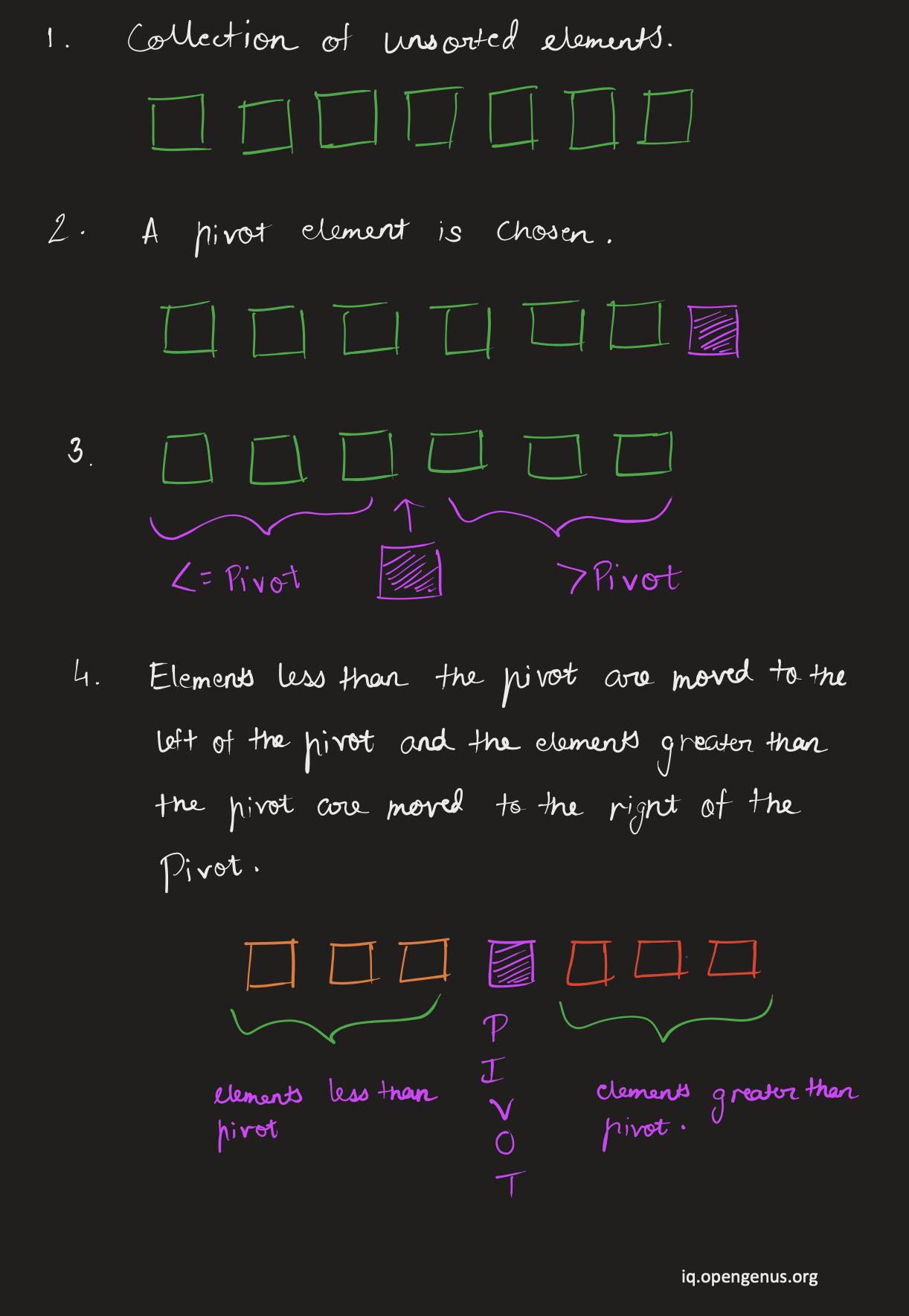 We begin by considering the first element as the pivot from a given collection of elements.

The elements present at the position of i and j are swapped with each other.

Now 5>pivot hence there will be no change in the position of reference pointers.

The elements present at the position of i and j are swapped with each other.

Now 1<pivot hence, there will be no change in the position of reference pointers.

We see that the collection is now divided into two parts where the entire list isn't sorted but elements are in sorted with respect to the pivot and the pivot element is at its correct position in the sorted order.

The same algorithm is now applied recursively to each of the partitioned collection until single element collections are obtained.

There isn't any right or wrong choice for pivot element, per se. However the choice of pivot element turns out be crucial for the performance of quicksort algorithm, varying its time complexity from upto twice as fast from its competitors (O(n logn)) to a worst case with time complexity O(n^2).

In actuality, there are various approaches to make the worst scenario for a quicksort algorithm exceptionally uncommon. Instead of the first element or the last element in the list, another fixed element, such as the middle element, could be used as the partitioning element. While this can help in some cases, basic oddities can still happen. Using a random dividing element virtually eliminates the occurrence of anomalous cases in practical situations.

The optimal pivot would be the collection's median; however, this is difficult to calculate and would significantly slow down the method.
Various methods for obtaining medians actually increase the algorithm's average performance while also making the worst case scenario unlikely to occur in practice. 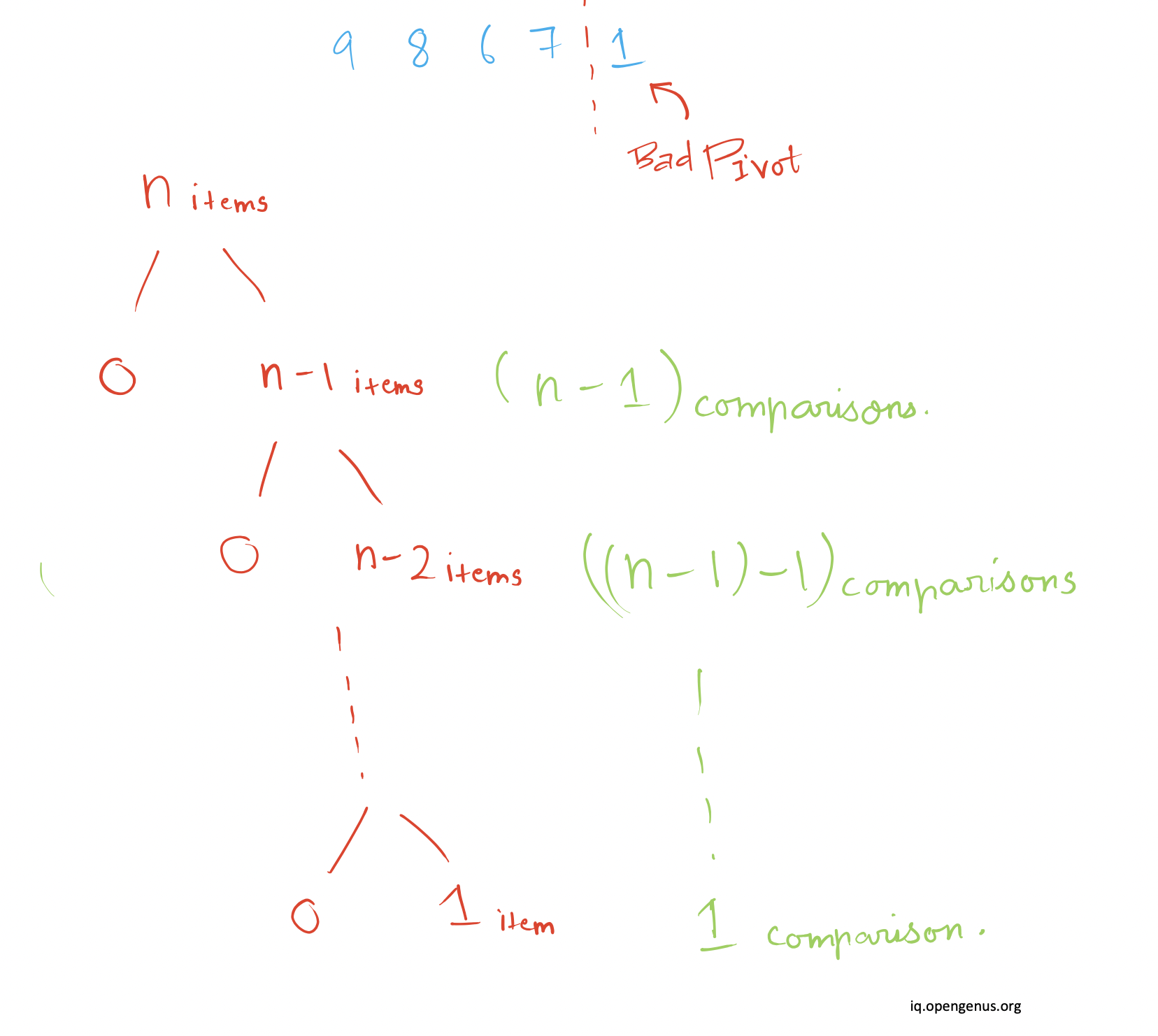 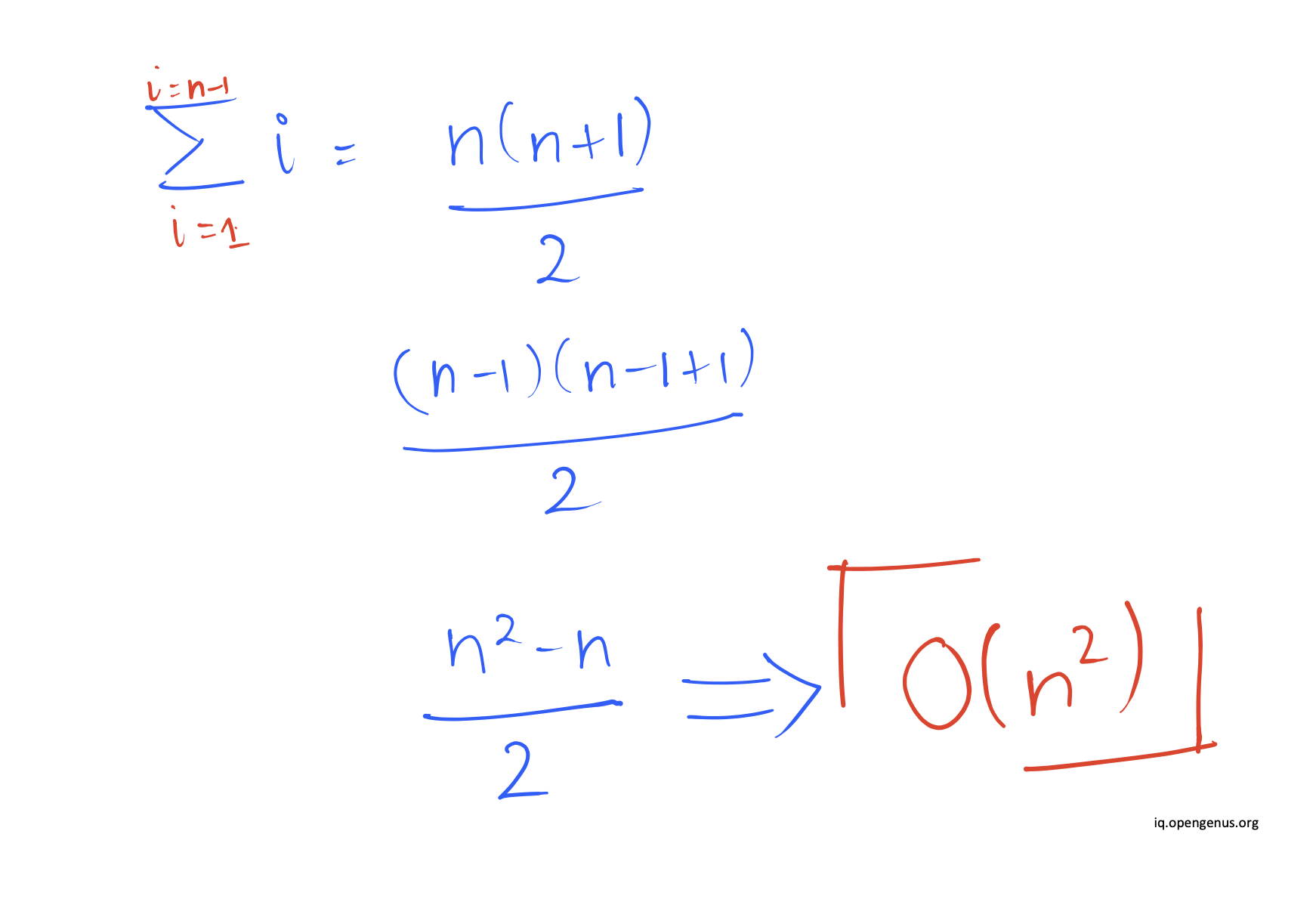 As a result, the splitting into subcollections occurs at either index 0 (beginning) or index n (end). This divides an n-item collection into 1 item less than the previous level and 0 items.

This method of selecting a "bad pivot" and then partitioning n-1 and 0 is performed recursively, resulting in an extremely skewed tree and, in the worst case, a quicksort algorithm that runs in O(n^2).

The different types of Pivot Selection in Quick Sort are as follows:

Finding the actual median of an array is a challenging problem. In practice, it will take O(N logN) time to find the median as it is same as sorting the data. In theory, it can be done in O(N) but the constant factors are high. So, finding the true median and using to as the pivot is not feasible.

The alternative is to use algorithms that give a good estimate of the median that is an element that is closer to the median.

At each stage of this approach, samples of size three are employed. Primarily, sampling ensures that the dividing components do not always appear at the bottom of the sub lists. The approach employs the first, middle, and last components as samples and the median of those three as the dividing element to make the worst scenario improbable. Using this strategy, the worst case for sorted input is clearly eliminated, and quicksort's running time is reduced by around 5%.

The method employs a sample size of 5 components, including the first, middle, and last elements, as well as two more elements chosen at random between the first and last elements using a random number generating function. Although this strategy improves load balancing and cuts quicksort execution time by more than 5%, there is a cost associated with random number creation.

This method, like the median-of-five with random index selection scheme, uses a sample size of five items. The five elements are chosen in the following order: first, middle, last, and two others at positions [(low+high)/4] and [3*(low+high)/4], where low and high are the indexes of the first and last entries in the original array, respectively. As a result, it creates a new five-element array that the algorithm will employ. After sorting the new array, it returns the middle member. The partitioning element is the returned middle element, which is the median of those five elements. As a result, the usage of random index selection is no longer necessary.

When the collection's mode is chosen as the pivot element, the algorithm's running time will be best case time complexity only when the mode is an element close to or equal to the collection's median, because our collection will be partitioned into two equal halves, whereas the mode being closer to the greatest or smallest element will result in a skewed partition and a worst case time complexity of O(n^2).

When the pivot element for the algorithm is picked at random, it is assumed that the element chosen will be near to the collection's median, resulting in a pivot partitioning the collection into two equal halves and a best case time complexity. However, the largest/smallest element, or an element near to the largest/smallest, could be chosen as the pivot, resulting in a pivot splitting the collection in a skewed manner and, as a result, a worst-case time complexity.

Choosing the largest/smallest element as the pivot results in the worst case time complexity for the algorithm because the splitting of the collection occurs at either index 0 (beginning) or index n (end) which divides an n-item collection into 1 and n-1 items recursively as the algorithm proceeds.

With this article at OpenGenus, you must have the complete idea of different Pivots that can be used with Quick Sort.

GraphQL schemas are what GraphQL servers use to describe your data. The scheme defines a tree of types with fields that a data store then fills. They also specify what queries and clients can use mutations.