Bubble sort and Selection sort are both comparison-based sorting algorithms which can be differentiated through the methods they use for sorting. But before going through the key differences between them, let's understand how both of these algorithms work.

We have a table of differences further in this article.

Bubble sort is a comparison-based sorting algorithm that involves making passes over the input array where, in each pass, adjacent elements are swapped if they are not present in the required order (ascending or descending). It keeps on making the passes until the whole array is sorted.

The first pass is complete — largest element present will be at the end of the array.

In each pass, the comparison takes place up to the last unsorted element. The array is sorted when all the unsorted elements are placed at their respective correct positions.

Optimized Bubble Sort: If, in a pass, we do not make any swaps, then we don’t need to make any further passes. 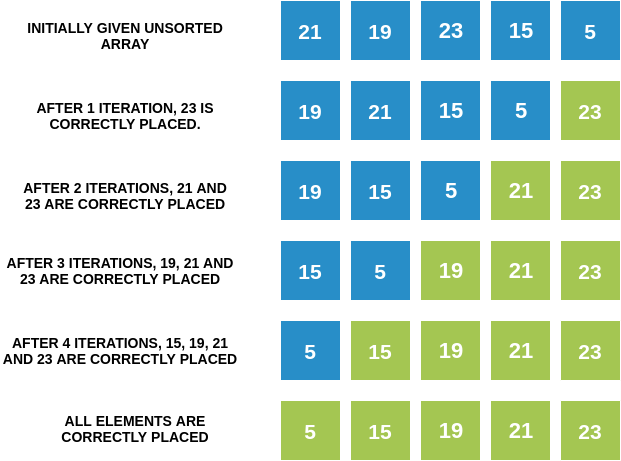 Selection sort is also a comparison-based sorting algorithm that involves dividing the given array into two parts:

Considering we want to sort the array in ascending order:
In every iteration, we pick the minimum element from the unsorted sub-array and place it at the end of the sorted sub-array. We repeat this entire process until the unsorted array becomes empty.

Repeatedly select the smallest element from the unsorted sub-array and swap it to its proper index. 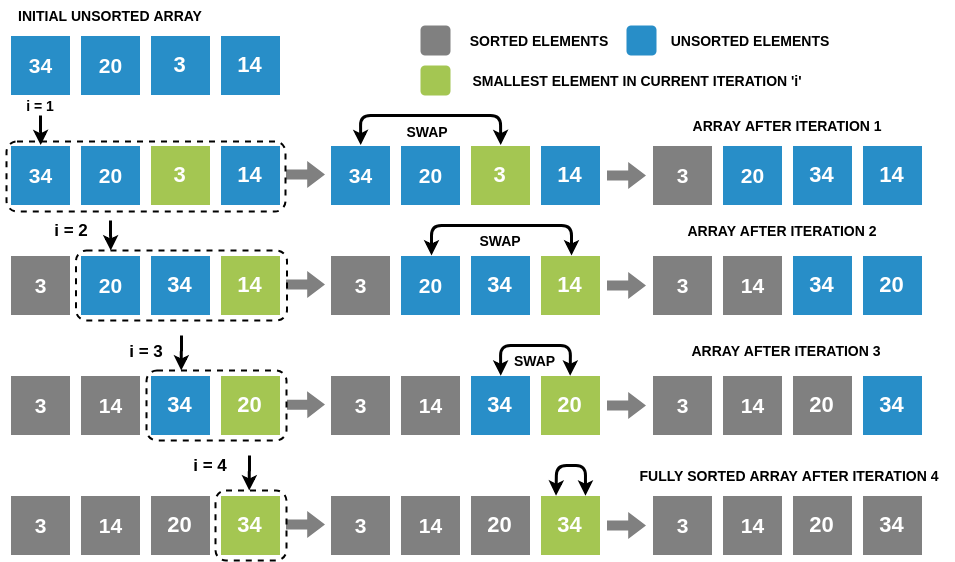 Below are the parameters used to judge the differences between the two algorithms:

Bubble sort compares the adjacent elements and swap them accordingly while selection sort selects the minimum element from the unsorted sub-array and places it at the next position of the sorted sub-array.

Selection sort is faster compared to bubble sort as it requires lesser number of comparisons.

However, selection sort can be made stable by incorporating the indexes of equal elements when comparing and sorting them. But then, it leads to an increase in the space complexity from O(1) to O(N), where N is the size of the array. 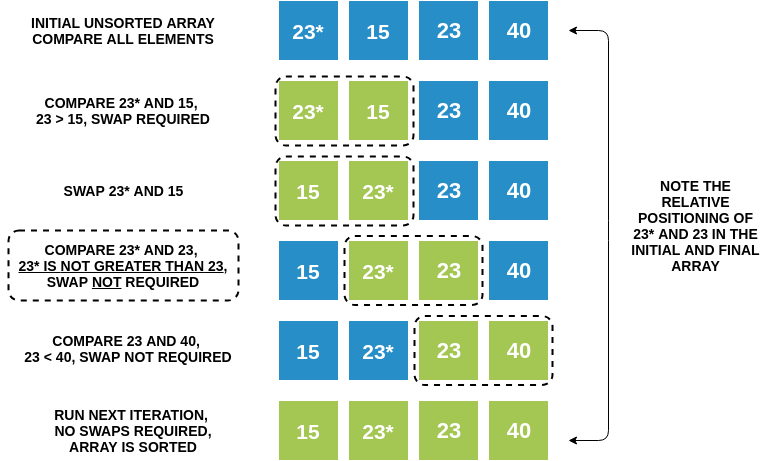 The time complexity of both the algorithms is as follows:

The main difference between bubble sort and selection sort is that bubble sort operates by repeatedly swapping the adjacent elements if they are in the wrong order. In contrast, selection sort sorts an array by repeatedly finding the minimum element (or, maximum element if we we want to sort the array in descending order) from the unsorted part and placing that at the beginning of the array.

4
2
1
0
Even though the first two elements are already sorted, bubble sort needs 4 iterations to sort the given array. 8. How can you improve the best case efficiency in bubble sort? (The input is already sorted)

What will be the space complexity of the bubble sort algorithm?

O(N)
O(2^N)
O(1)
O(N^2)
No extra space/memory is used besides that already used to store the original array and the temporary variable used to swap array elements. The sorting is directly done on the original array. This notation is used to specify constant space complexity.

What is the average case complexity of selection sort?

O(N^2)
O(NlogN)
O(logN)
O(N)
In the average case, even if the input is partially sorted, selection sort behaves as if the entire array is not sorted. Selection sort is insensitive to input.

What is the disadvantage of selection sort?

It is not scalable
It requires auxiliary memory
It can be used for small keys
It takes linear time to sort the elements
As the input size increases, the performance of selection sort decreases.

The given array is arr = {3,4,5,2,1}. Find the number of iterations in bubble sort and selection sort respectively.

In this article, we will see some of the data sources from where we can download and use datasets for free for our data science projects.

In this article, we will go over 70 questions that cover everything from the very basics of Text Summarization to the evaluation of summarized pieces of text using various metrics.