Among the wide range of real world applications of Natural Language Processing (NLP) one of the most substantial and impactful is the spell correcting/checking techniques that have being developed and refined over the years of research and development, these techniques are being used in many of our day-to-day activities like word prediction while sending a text, spell checker while writing a word document, query prediction in search engines etc. Hence it is warranted that we go through how these algorithms have evolved over the years and how the effectiveness of these algorithms varies on using them individually or with conjunction with other algorithms.

In this article I will attempt to take a survey of these techniques and list out the major algorithms that have stood the test of time or have been used as an inspiration for more efficient algorithms for spell correction/checking.

We have explored the following:

One of the earliest formal treatment of spell correction was due to Damerau (1964). The main method described in this paper assumes that any word which can not be found in the dictionary has at most one error which can be categorized into four categories:

The author claims that nearly 80% of all the spelling errors made fall under the four above said classes.

A bit encoding used to create a dictionary by maintaining a 28-bit character register, first 26-bit is used for alphabets and remaining two bits are used for numerals and special character respectively, then a heuristic approach is used to compare strings of similar length with the query string and find if one if any any error is present or not

The method is less efficient by today's standards and more refined algorithms were needed.

We now further study the use of string matching techniques along with lexicon indexes to find approximate candidate matches of a query string in large lexicon.
We first lay out some widely used algorithms used to find the approximate matches of query string in a large lexicon, we call them approximate string matching techniques. Since a complete search of a large lexicon for every query string in computationally infeasible, some form of indexing is required to extract the likely candidates from the lexicon, i.e we do a coarse search of the given vocabulary. Once we have extracted the likely candidates, we perform fine search to refine our final results.

We employ a dynamic programming algorithm for this method which works in O(mn) time complexity. A matrix of (m+1)(n+1) is maintained and the (i,j) of the matrix will hold the the edit distance between the strings consisting of the first i characters of s and the first j characters of t. An outline of the algorithm given below

There are more sophisticated versions of edit-distance which consider moves, allocation of different costs to each kind of operation, for e.g. if the expression:

Phonetic methods are relatively crude and are used rarely used in applications or or are used in conjunction with other algorithm.

First we discuss how this scheme is used for pattern matching. An ordinal number is associated with each string in the lexicon and with each n-gram of the string is associated a postings list which is a list of ordinal number of words containing that n-gram. Given a pattern(i.e. a regular expression) the postings list of all the n-grams of the pattern are retrieved
For e.g a part of posting list of 2-gram index is shown below for the query term "bord" with bigrams "bo", "or" and "rd" -

For spell correction and string matching we may use the following method -
1. Take the union of all the string (s) in the postings list.
2. Find the gram-count(q,s) for all string s in the list and the query string q.
3. Use some efficient data structure like heap to store the gram-counts and identify the top matches for the query.
We can also use different methods like in the example given we can select the strings which contain at least two of the three given bigrams that would give us the output strings aboard, boardroom and border.

For a fixed value of n, n-gram is a fixed length substring search. An alternative method is to use permuted lexicon indexing scheme which provides the access to the lexicon via substring of arbitrary length. In this scheme each string of the lexicon is rotated form of every word, e.g. representation of the word hello is shown below - 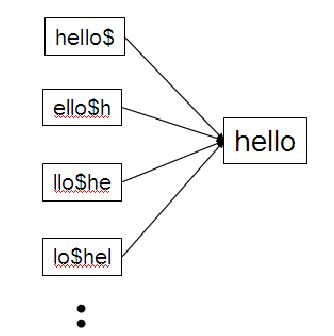 Where $ is string termination character. The lexicon is then sorted on the rotated form and the approximate matched of the query string q of length |q| is found as follows -

This method is faster than the n-gram indexing scheme but is less efficient.

This is a traditional coarse search scheme, it buckets the available vocabulary according to their phonetic sounds. For any query string q, the matching is binary and there is no notion of ranking and proximity, the phonetic coding is subjective and depends on the methods used such as Phonix or Soundex.
This method is ineffective so n-gram and permuted lexicon indexing scheme is preferred over it or used in conjunction with it.

After we query a string q in our indexed lexicon, we obtain a set of matching candidates as the results. There may be cases when these results constitute a significant chunk of the lexicon so there arises a need for further processing this result and filter out the irrelevant outputs.

Various other methods can be used like after n-gram indexing output we can further use Ukkonen's gram-dist(s,t) to refine the search space or after permuted lexicon indexing scheme we can use edit-distance algorithm, etc.

What is among these is an approximate string matching technique?

Significant modification over the edit-distance algorithm, the proposed algorithm, SymSpell, is able to reduce the time complexity of candidate generation (coarse search) and dictionary lookup for a given string and for edit-distance n. It is approximately one million times faster than the traditional edit-distance algorithm discussed earlier in which we take into consideration the operations delete, transpose, replace and insert to calculate the edit-distance n.
In this algorithm only delete operation is required. Remaining operations transpose, insert and replace are transformed into delete operations to find the candidate matches in the given lexicon.
As an example, for an average 5 letter word and at a maximum edit distance of 3 we will have about about 3 million possible spelling errors, but SymSpell needs to generate only 25 deletes to cover them all.
We will look at a toy example of how we can implement SymSpell in python using symspellpy library.

We now divert our attention to Sequence-to-Sequence (Seq2Seq) model which is a type of a neural network and basically consists of two parts - an encoder and a decoder.
The architecture of the model can be set up in many ways and one of the most prominent method is to use a Recurrent Neural Network (RNN), the first part is the encoding part which learns a lower dimensional representation of the input e.g. input may be the miss-spelled word and the second part is the decoding part which takes the output of the encoder as the input and gives back the output in accordance with the desired application e.g. decoder may output the correct spelling of the word fed to the encoder.
So as we can see, the encoder-decoder or the seq2seq model is one bigger neural network which comprises of two smaller neural networks namely an encoder and the decoder.
In the RNN architecture, each cell of the encoder takes two input, one input is the current input (e.g. the current character of the miss-spelled word) and the other one is the output from the previous cell and for the decoding part, each cell takes one input from the previous cell and generates a vector as the output (e.g. the candidate character for the current position in the correct word), this output may correspond to a character in our vocabulary.
An intuitive architecture of the model is given below -

Use of NLTK library of python to extract n-grams

Next we construct a dummy sentence

Then we create a lexicon out of it

$ is used as beginning and end token of the string

Finally we get the output for single string as follows -

In their paper, Zobel and Dart have analysed each of the traditional methods discussed above and come to a conclusion that n-gram indexing provides an excellent coarse search mechanism for identifying approximate matches in a large lexicon. N-gram indexes used together with a fine search mechanism like the one proposed by Ukkonen can more than double the effectiveness.
They further conclude that although phonetic coding mechanism is fast and uses less space it is a poor string matching mechanism with effectiveness lower than that of other schemes.
However SymSpell and Seq2Seq models outperform all the traditional methods.

We need to find total number of substrings that are divisible by 8 but not 3 in the given string. We have solved this problem using Dynamic Programming in linear time O(N) where the brute force approach takes O(N^2) time.