Mobile Development has been quite in discourse since the emergence of the Android Apps and then the iOS Apps after that. We all have been observing quite a fight amongst both platform developers to be able to prove that their platform is better than any other platform. Now, if you are a Software developer or even thinking of becoming one, hang there, sit back for a minute and think about both the Operating Systems. Now, there are a few questions for you :

If all of the above three questions have your answer as NO, then doing all that without making it a headache for you, is even possible?
Here comes Flutter to your rescue.

Flutter is Google’s UI toolkit for building beautiful, natively compiled applications for mobile, web, and desktop from a single codebase.

Flutter in native language is an app SDK by Google which can help you code for Android as well as iOS on a single codebase.It is used for building high-performance apps for Android, iOS, Web and Dekstop. 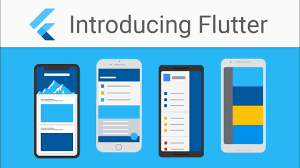 Always Flutter, because of the following reasons :

The Anatomy of a Flutter Application 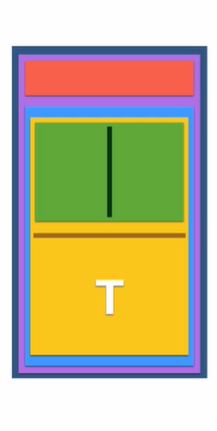 The above image is of a mobile device that is showing the basic anatomy of what a basic Flutter Application can have, which you can/cannot use while you build your application as Flutter still gives you a large variety of widgets and classes to choose from to get you started with Mobile App Development. There is something called as a widget-tree which will explain the colours in the above image. Following is an example of a widget tree for the above app shown.

Now, to understand it better, it is recommended to have a look at both of the above pics side by side. Now, let us get started with the explanation of the above widget-tree. First thing that is created is a Scaffold, it is nothing but a blank screen(in purple). Inside the Scaffold, there is an AppBar at the top of the screen(in red) that is what any other AppBar is, looks the same. Below that, we have a Container(in blue) which is just a whole box in itself that contains something. Now, inside the Container, there is a Column(in yellow), which is literally a column like structure that will contain widgets inside it.Now Inside the Column, there is a Row(in green), now you might argue that this looks same like a Column but here we are stacking the widgets inside the Column vertically, hence, in this case it is called a Row. Now, you might be wondering where to add or call it a Column and where to add or call it a Row, So, here is a simple distinction to that, if the Widgets are aligned side by side horizontally, they are Row Widgets and if they are aligned one below the other vertically then they will be called as Column. And then below that we are having a piece of Text. Now, the widget tree is complete as respective to the Image of the Device. There can still exist multiple nested widgets(widgets inside widgets), for a little complex and enhanced design of the App. For Example, you can add two widgets side by side horizontally inside the Row, maybe two pieces of different texts, or an image(using Image Widget) and text, or it can be an image or an icon(using Icon Widget).

You see, for everything you want to do in your App, there is a pre-defined Widget for that. You can customize these Widgets according to your choice too.
But that is a topic to be seen later.

Voila, for now, you know a lot about Flutter!! But wait, do not think that only you know about it :P

With this article at OpenGenus, you must have a strong idea of Flutter and the central idea behind it. Enjoy.

This is an overview of the Inception pre-trained CNN model along with a detailed description about its versions and network architectures including Inception V1, V2, V3, V4 and Inception-ResNet.

In this article, we have explored Singleton design pattern in Java in depth and demonstrated several approaches each with its own advantages and shortcoming. We have explored related concepts like early and late initialization as well.