Have you ever come upon situations, outcomes, or events that just seem odd? Or if you've heard of the terms null hypothesis, p-value, and alpha but don’t really know what they mean and how they’re related then you’ve come to the right place! And if you’ve never heard of these terms, I urge you to read through this post as this is an essential topic to understand.

In this post, we will be discussing if we know whether to perform some action or not in those particular situations or events. Will those actions give a positive result or a negative result then we can have an added advantage of doing the right things.

Statistics is a grammar of Science. - Karl Pearson

After Reading this post, you will get an idea about:

This article assumes that you are interested in the technical know-how of Statistics, Statistical Testing in particular!

Hypothesis testing is a process of using statistics to test the probability for a specific hypothesis to be true. It is used to determine whether there is enough evidence to infer for a certain sample that the certain condition is true for the entire population.

Hypothesis Testing identifies the situation where the action should be taken or not based on what results it will produce.

Hypothesis is an idea that can be tested

There are two ways to formulate the hypothesis to test. In a general approach we try to evaluate two mutually exclusive statements(two Hypothesis H0 and H1) on Population using a sample of data.

The Null Hypothesis states that a population parameter is equal to that of a value. These are the observations that are a result of a pure chance and there is no effect relationship or difference between two or more groups. It is an assumption made about the population which needs to be tested and is considered to be true until evidence is found against it.

In short, making an initial assumption on a particular population is Null Hypothesis.

A hypothesis that proposes the sample observations are influenced by some non-random cause and there is an effect or difference between two or more groups. It states that the population parameter is different from the value of the population parameter in the null hypothesis. It is the claim you are trying to prove with an experiment. The alternative hypothesis is what you might believe to be true or hope to prove true.

In short, It is the opposite of the assumption made and is accepted when the former is rejected.

A test will remain with the null hypothesis until there is enough evidence (data) to support the alternative hypothesis.

Computing the Tests and its P-value

If we found the p-value is lower than the predetermined significance value(often called alpha or threshold value) then we reject the null hypothesis. The alpha should always be set before an experiment to avoid bias.

Significance of p-value comes in after performing Statistical tests and when to use which technique is important. So now I will list when to perform which statistical technique for hypothesis testing.

ANOVA is a statistical method that stands for analysis of variance and is the extension of the T and the Z test. It is used to compare multiple (three or more) samples with a single test.

It is used when the categorical feature has more than two categories. Before the use of ANOVA, the t-test and z-test were commonly used.

The hypothesis being tested in ANOVA is:

In order to decide if your test value is high enough, first state the null hypothesis and the alternate hypothesis. Then generate a chi-square curve for your results along with a p-value.

The hypothesis being tested for chi-square is:

Where O is the observed value, E is the expected value and “i” is the “ith” position in the contingency table.

A t-test is a type of inferential statistic used to determine if there is a significant difference between the means of two groups, which may be related in certain features.It is performed on continuous variables.
Calculating a t-test requires three key data values. They include the difference between the mean values from each data set (called the mean difference), the standard deviation of each group, and the number of data values of each group.

To run the t-test for our example, first, we need to import stats from Scipy.

The correlated t-test is performed when the samples typically consist of matched pairs of similar units, or when there are cases of repeated measures.
The formula for computing the t-value and degrees of freedom for a paired t-test is: 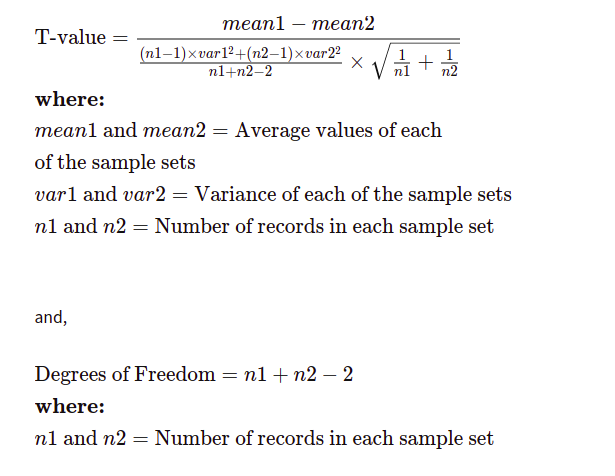 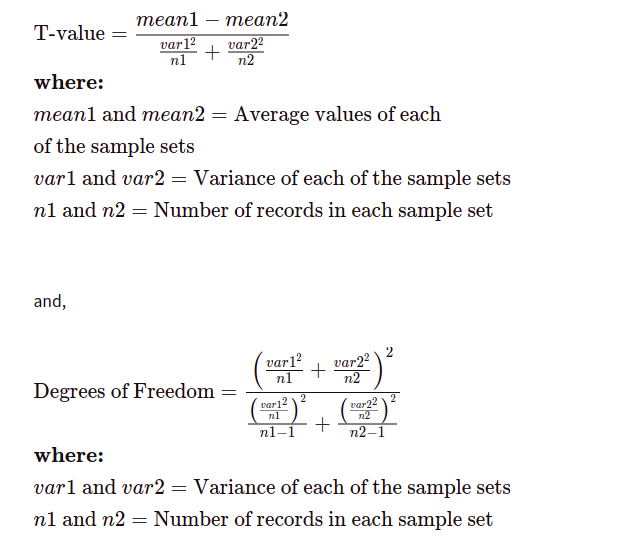 A z-test is a statistical test used to determine whether two population means are different when the variances are known and the sample size is large.
The test statistic is assumed to have a normal distribution, and nuisance parameters such as standard deviation should be known in order for an accurate z-test to be performed.

What's the Difference Between a T-Test and Z-Test?

Z-tests are closely related to t-tests, but t-tests are best performed when an experiment has a small sample size, less than 30. Also, t-tests assume the standard deviation is unknown, while z-tests assume it is known. If the standard deviation of the population is unknown, but the sample size is greater than or equal to 30, then the assumption of the sample variance equaling the population variance is made while using the z-test.

When we decide to reject or fail to reject the null hypothesis, two types of errors might occur.

Type I error: A Type I error occurs when we reject a null hypothesis when it is true. The probability of committing a Type I error is the significance level α.

We will learn about prime numbers and the twin prime conjecture. We will also look at an efficient algorithm for finding the first twin prime pairs up to a number N.