In this article, we have demonstrated how to create a virtual environment and then, setup a basic Django project within it.

Django is a free and open-source, Python-based web framework that follows the model-view-template (MVT) architectural pattern. MVT is a software design pattern for developing a web aplication.

First, we have to install python's latest version from python's official website: https://www.python.org/downloads/
Follow all the default steps and finish the set up in a folder of your choice.

Note that all of the following commands and specific to a Windows operating system and might be slightly different for other systems.

What is a virtual environment?

The official documentation of Python states the following:

Python applications often use packages and modules that aren't included in the standard library by default. Applications often need a specific version of a library/module because its either written using an obsolete functionality of that version or needs a particular bug to be fixed. This means that it may not be possible for one Python installation to meet the requirements of every application.

There are many options to manage environments and packages within the Python ecosystem, some of which are recommended in the Python documentation. Python itself comes with venv for managing environments which we will use for this guide.

Creating a virtual environment for your Django project

First, let's create a folder named "Django Projects". This is where we will be storing the folders for all our projects. Now we create a folder for our project. Let's name this "Trial Project". This folder will contain the virtual environment and the "src" folder containing the actual project files. It is always better to keep logically related content bound together in a common folder and separate from the remaining content.

We are now going to open the commmand prompt and traverse to the folder we just created for our project - "Trial Project".

Continuing the process of creating a virtual environment, we do so by typing the following command -
"python -m venv trialprojectenv"

The command prompt now includes the name of your environment in '()' to indicate that the environment has been activated, as seen above!

We can now install Django under the "Trial Project" folder with the trialprojectenv activated. We do so by the command -
"pip install Django"

If the terminal prompts you to update the pip command itself, we suggest you do that too using the command they provide inside single quotes.

Setting up your Django project

So far we have a "Trial project" directory/folder that contains the "trialprojectenv" virtual environment folder. Now we will create the "src" folder which holds our project's actual files.
Remember, we do all this with the virtual environment activated!

Now we start our project (we are naming it trialproject here) using the command -
"django-admin startproject trialproject ."
(including the . in the end)

django-admin is Django’s command-line utility for administrative tasks. In addition, manage.py is automatically created in each Django project. It does the same thing as django-admin but also sets the DJANGO_SETTINGS_MODULE environment variable so that it points to your project’s settings.py file. The django-admin script should be on your system path if you installed Django via pip. If it’s not in your path, ensure you have your virtual environment activated.

Run the server for our project

Once the project folder is set up, we run the server and check if everything has been correctly configured by the following command -
"python manage.py runserver" 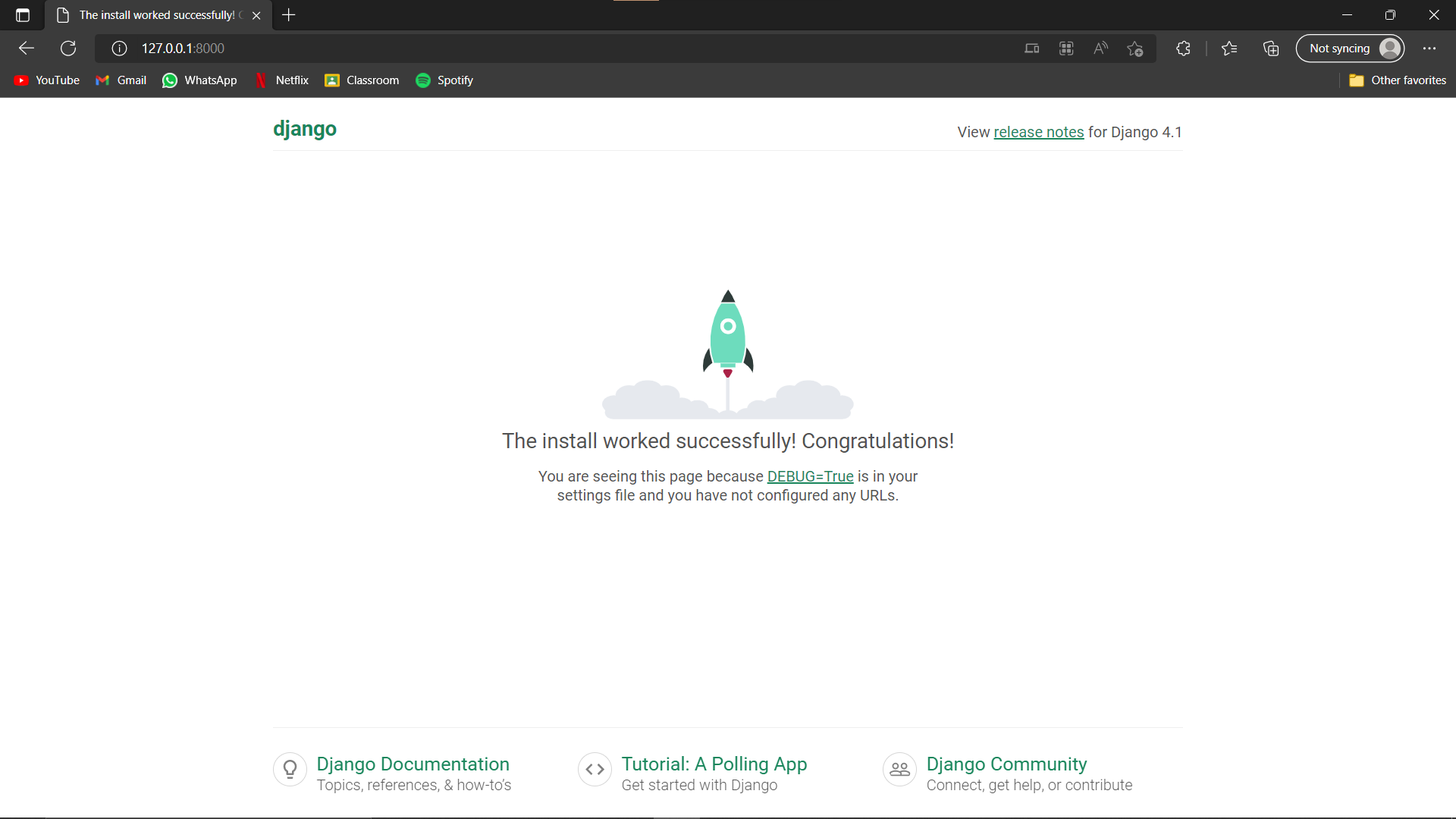 Isn't it bizarre that Netflix became good at DevOps by not prioritizing it? It's like saying that Michael Jordan became a great basketball player by not shooting hoops. But that's the truth.

OpenGenus IQ: Computing Expertise & Legacy
—
Setting up Django for Python with a virtual environment
Share this