In the previous article, we discussed about the in-depth working of BERT for NLP related task. In this article, we are going to explore some advanced NLP models such as XLNet, RoBERTa, ALBERT and GPT and will compare to see how these models are different from the fundamental model i.e BERT.

The OpenAI group exhibits that pre-trained language models can be utilized to solve downstream task with no boundary or architecture modifications. They have prepared a major model, a 1.5B-parameter Transformer, on an enormous and different dataset that contains text scratched from 45 million website pages. The model produces coherent passages of text and accomplishes promising, competitive or cutting edge results on a wide variety of tasks.

How XLNet different from BERT?

XLNet combines the bidirectional capability of BERT with the autoregressive technology of Transformer-XL:

The study is carried out by Facebook AI and the University of Washington researchers, they analyzed the training of Google’s BERT model and distinguished a few changes to the preparation method that improve its performance. In particular, the researchers utilized another, bigger dataset for preparing, trained the model over far more iterations, and eliminated the next sequence prediction training objective.

How RoBERTa different from BERT?

Facebook AI research team improved the training of the BERT to optimised it further: 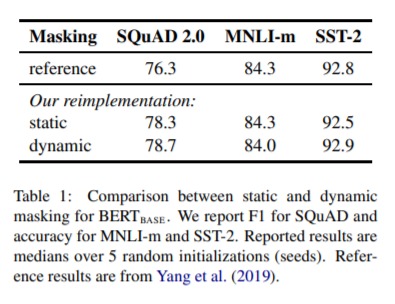 RoBERTa beats BERT in all individual tasks on the General Language Understanding Evaluation (GLUE) benchmark. The new model matches the XLNet model on the GLUE benchmark and sets another advancement in four out of nine individual tasks.

How ALBERT different from BERT?

The performance of ALBERT is further improved by introducing the self-supervised loss for sentence-order prediction to address that NSP task on which NLP is trained along with MLM is easy. But ALBERT uses a task where the model has to predict if sentences are coherent.

A lot bigger ALBERT configuration, which actually has less boundaries than BERT-large, beats the entirety of the present state-of-the-art language models by getting :

ALBERT demonstrate the new state-of-the-art results on GLUE, RACE, and SQuAD benchmarks while having fewer parameters than BERT-large.

Features of the GPT-1 model:

GPT-1 demonstrated that language model served as a compelling pre-preparing target which could assist model with summing up well. And able to perform better than supervised state-of-the-art models in 9 out of 12 tasks.

Features of the GPT-2 model:

Features of the GPT-3 model:

GPT-3 does not perform very well on tasks like natural language inference. The news articles generated by the 175B-parameter GPT-3 model are hard to distinguish from real ones. GPT-3 include complex and costly inferencing from model due to its heavy architecture.

This article summarises the NLP model that are pre-trained and fine tuned for the Natural Language related tasks. Each model had been the superior till there drawback have been overcome. But each model proved to do their task and achieve the objective for what they are made for. So from this article you got the fundamental knowledge of each model and you can refer to the followed references for their papers.

In this, we have covered different NLP tasks/ topics such as Tokenization of Sentences and Words, Stemming, Lemmatization, POS Tagging, Named Entity Relationship and more.

The fundamental NLP model that is used initially is LSTM model but because of its drawbacks BERT became the favored model for the NLP tasks.