In this article we are going to cover about the NLP tasks/ topics that is used to make computers understand the natural languages.

Firstly to start with NLP we have to install NLTK (Natural Language ToolKit) through Python command prompt: pip3 install nltk
After that following library are to be import in Jupyter Notebook:

Following are the NLP topics/ tasks that we are going to learn:

Tokenization of Sentences and Words

We use the tokenization to split a text into sentences and further in words. Word tokenization become crucial to convert a text of string to vector or tokens.

We use the punkt module of NLTK that contains the algorithm to tokenize the text.

When we have a group of text and we have to tokenize it into separate words.

Always remember in NLP whenever we have to perform any kind of task we have to separate out the words with the word tokenizer.

When we have many variation of a same word. For example, root word is 'walk' and the variations are 'walking', 'walked', 'walk'. It is used to make a consistency in the text by converting all the variation of a word to its root form.
Stemming works by cutting the suffix from the word.

We will use PorterStemmer algorithm to perform stemming.

All the variations of 'walk' word are their in the list. The stemming converted all the words of list in the root form i.e. walk. You can also see that stemming cuts the prefix from all the words to make it root word i.e. 'walk'

How Lemmatization is better than Stemming?

You can see that 'cries' become 'cri' and 'this' become 'thi'. What stemming is doing is that it just simply tries to remove the suffix from the word to make it as a root word. But the converted root words 'cri' and 'thi' are not in the English dictionary.

POS (Part of Speech) is used to determine the class to which a word belong to.
Generally Penn Treebank POS tag is used for English language. 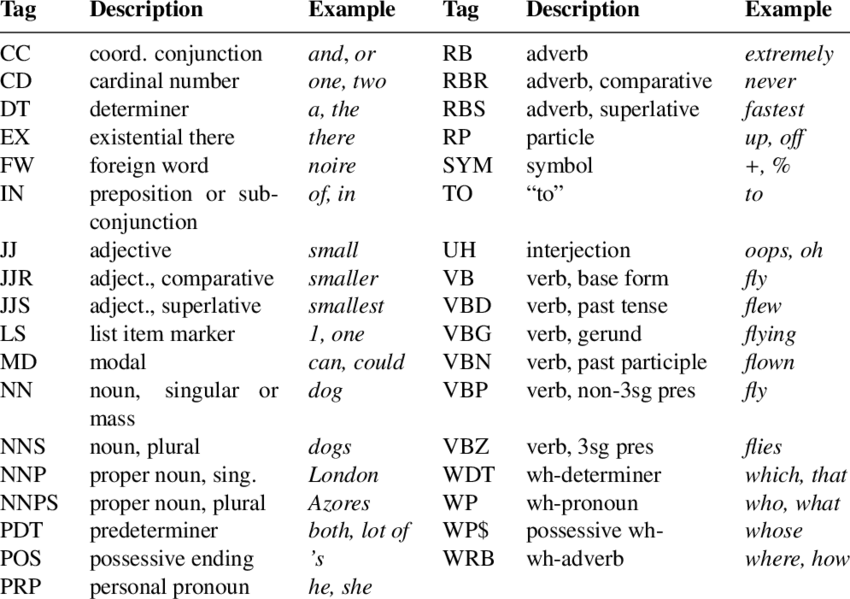 To perform POS tagging we have to download Averaged_perceptron_tagger. It performs the POS tagging using the averaged, strutured perceptron algorithm.

Stopwords are the words that are commonly used in a text and which doesn't add much meaning to a sentence like 'the', 'is', 'are'. Stop words have to be removed for the smooth processing of text.

To remove stopwords from the text we have to download stopwords. It is a module that contains the stopwords for natural language.

An Entity are the words or the group of words which represent an information about common things such as persons, location etc. These phrases generally belong to noun part of speech families

A Named Entity in the text having proper noun as the part of speech text and have a proper naming.
For example, consider this sentence: Trump will meet the chairman of Samsung in the New York City.
In the above sentence,
Entities are Trump, chairman, Dubai and New York City, as these words represents a person or locations.
And Named Entities are Trump, Dubai and New York City but chairman is not a named entity as it has no proper name as part of speech tag.

It is a step-by-step process for the identification of noun phrases from the text data. Noun phrases are connected to root of the dependency graph by direct subject relationship.

To visualize the Name Entity Graph we will use the POS Tagged word and will use the maxent_ne_chunker module for named entity chunker. And will use the draw() function of tkinter for visualizing the dependency graph.

From the above image we can see that Named Entity are marked as Proper Noun. Trump is tagged as Person, Samsung as Organisation and New York City as GPE (Geopolitical Entity).

A bag-of-words is a representation of text that describes the occurence of words within a document.
Bag of words generate a vector that will help us in knowing like in a particular line which word is occuring how many times.

We will use the CountVectorizer for counting the occurence of words in each sentence.

cV.fit_transform(text.splitlines()) is fitting and transforming the line seperated text into the CountVectorizer algorithm.
Then, pd.DataFrame(bow.toarray(), columns= cV.getfeaturenames()) is converting the bag-of-vector to array which is then converted to dataframe with columns names as the unique words in the text.

In the above Dataframe, we can see that two lines are separated and the words that they contains are counted and represented. 0 means that a line doesn't contain that word.

There are also some laws related to texts that are used in NLP namely Heaps' Law and Zipf's Law. You read about them from the following links:
Heaps' Law
Zipf's Law

These are the some of the tasks that can be done with the NLP and will help you to understand how a computer is capable to derive the meaning of text.

We have covered the different types of browser storage (like cookies, local storage, session storage, indexedDB) and use case examples to grasp the pros and cons. In the end, you will be able to have a better knowledge of each type.

We have explored some advanced NLP models such as XLNet, RoBERTa and ALBERT and will compare to see how these models are different from the fundamental model i.e BERT.