Django is one of most widely used Python web development framework and powers several popular applications. In this article, we have explored the structure of a Django web application. It follows Model, Template and View (MTV).

Ok cool !,but What is Web Framework

Web Framework is set of components which provide you tools and libraries to simplify the website development.So for every web application you need some sort of same actions like authetication ,admin panel for maintaining the whole website.
So the Web Framework is used to make your development process a lot easier.

Some of the Features of Django

1.Rapid Development : Django was designed to help developers take applications from concept to completion as quickly as possible
2.Secure : Django provide secure way to store the user details .Used cryptographic hash function for encrypting the password.
3.Scalable :It can be scaled for more traffic using more hardware components.
4.Maintainable: Django is designed such that it follows the DRY(Don't repeat yourself )means removing redundant code.Maintaining the reusable code.
5.Versatile : Django can be used to build any type of website.From ecommerce site to online coding site ,social site etc.
7.Open Source : This is open source project.
8.Vast and Supported Community

Question how django tackles the request from the user

We say that MTV( Model,Template and View )

Django Models : is logical tools which we use to work with data and databases

Django Templates : what we see in the browser ,user friendly templating system.

Django Views : handles the communication between user and the database.

Request comes to the web server .It takes the url patterns and try to resolve.It takes a list of patterns and tries to match the URL. Django checks patterns from top to bottom and if something is matched, then Django passes the request to the associated function (which is called view).

View will return the HTTP response object and serve to client side browser.

Client side browser ,the response returns from the views ,get renders into the HTML templates.

This is how all this thing happens: 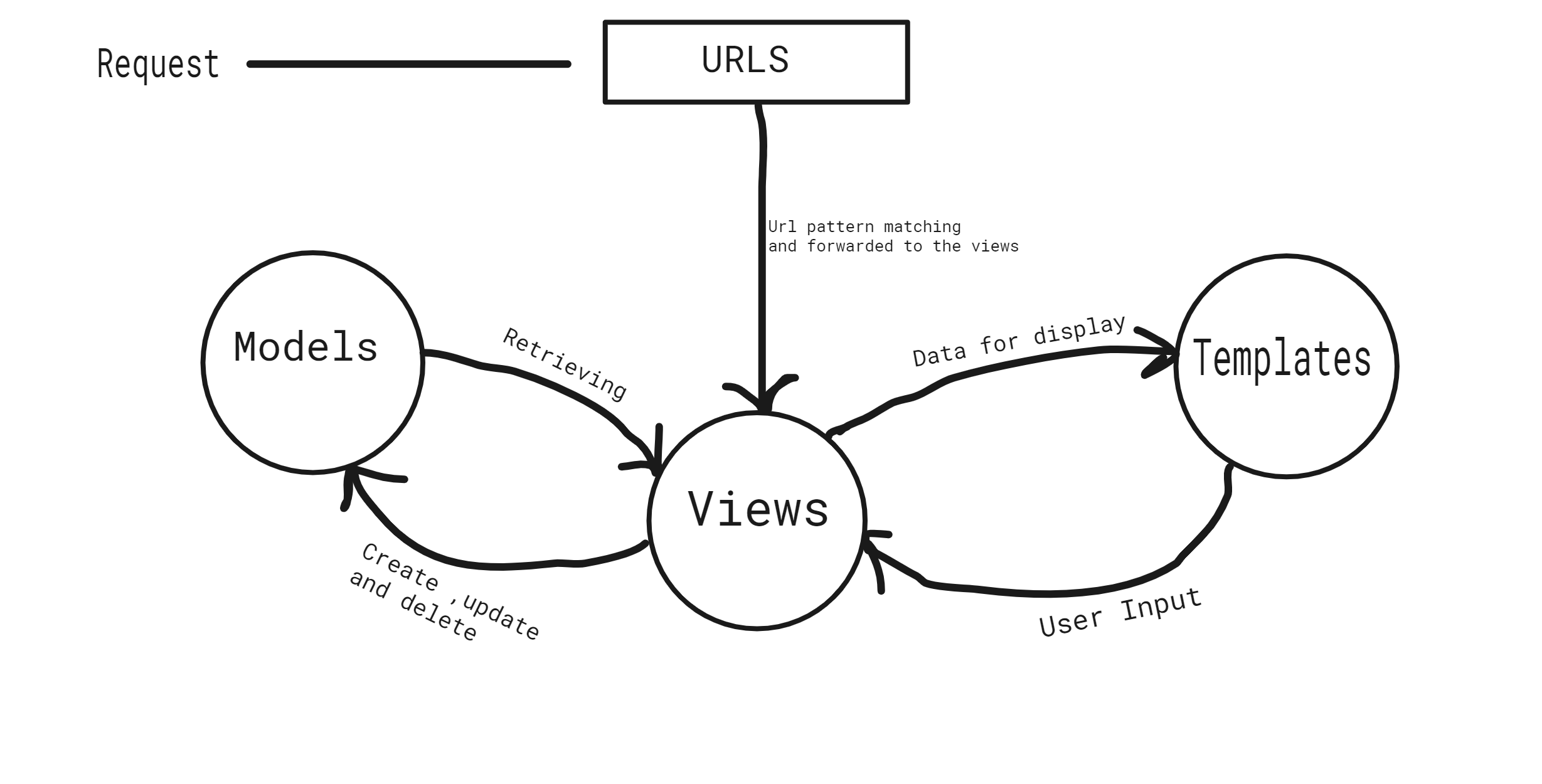 Other things that django can do:-

Django app contains all the package .If the developer is creating a product site which includes blogs also so the blog is contained in the app which includes all the functionalities like models,views and
other tools.

So the Project Structure of Django : =

Manage.py command-line utility for exceuting django command from within your project

db.sqlite3 The database ,this is created when we run migrate command within the project

(inner)project_folder_name is the django web application.

In the inner project folder

init.py this tells that the folder is a python package.

wsgi.py compatible with web servers to serve your project.ALthough this file is not being used during development.

This will create the app inside the root project_folder which includes : -

init.py tells python that your app is package.

apps.py is a configuration file.

models.py all the models for the app.

tests.py contains test procedures that will be run when testing your app

views.py where you define the logical method for interacting with models.

All the other things like static files CSS and Js .stored in the static folder.
The configuration for static files updated in the django settings.py.

For installing the django in your local desktop ,you need to use pip.

This is all about the django application structure.You can find many tutorials onine for learning django.Time to grab some cofee,Build your first django web app.

For more documentation of Django :- You can find it on the official site

With this article at OpenGenus, you must have the complete idea of the Application structure of Django. Enjoy.

In this article, we have explored the Model View Controller (MVC) architecture and how it is used in web development. We have also learnt about its use specifically in Django.

In this article, we will be learning about Private Inheritance in Object Oriented Programming (OOP) with reference to C++. Private inheritance involves the use of Private Access Specifiers for its member functions and data members.