In this article, we have explored the approach of Boundary Traversal of Binary Tree along with Time and Space Complexity.

When we capture only elements that exist on the Boundary of the Binary Tree is the kind of traversing, is what "Boundary Traversal of Binary Tree" refers to. 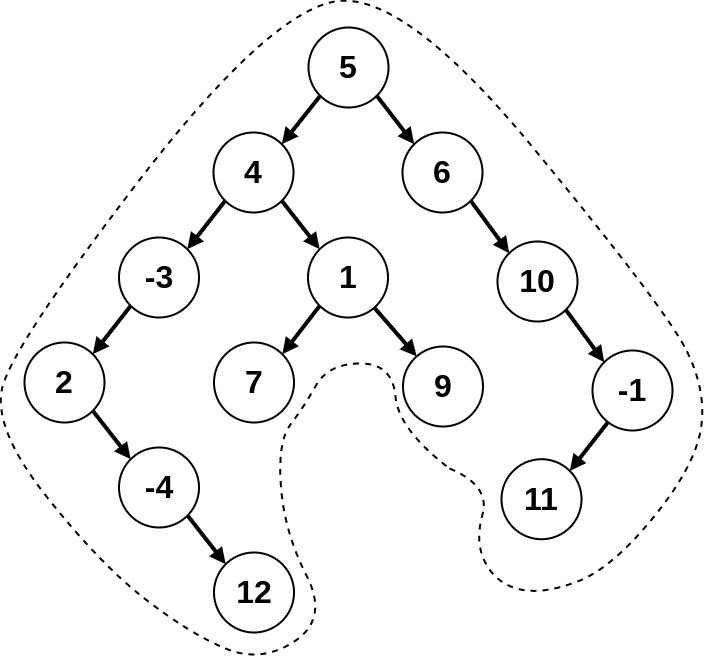 We can collect three following types of nodes:

Any node that has no child will be considered as a leaf nodes. So, again if we take above diagram as reference, then,

Traversing of Binary Tree can be done in two manners,

For clockwise first, we collect all the right end nodes and then the leaf nodes while reading it from right-to-left and then all the left end nodes from the bottom leaf node to the root of the tree.

For example, we cannot read the root node in both right end traverse and left end traverse. i.e. we would have to remove 5 from them, depending if we do clockwise or anti-clockwise.

Of course, first we need a tree before we could traverse it. For that we can create a class Node, which will have three attributes for a

Let's define some methods, to divide the work of traversing between them.

To read all left end nodes on each level. We can write a recursive method or a loop that will it's child, but we will priortize left child over right child and store them in a list or array or recommended would be linked list.

This way, we can visit left most child on every level and if in case, left child is None ( not available ) then we will visit the right child, because, in this case right child should act as the left most or to say left end child.

And one more requirement is to exclude both root and the last left end node, hence, root and left most leaf node. Why? because as we noted this above that we cannot have redundancy.

Here, return lefts[:-1] will exclude the leaf node that would be include in the 2nd last iteration.
And, to exclude the root node, we are starting the checks on the child nodes, which will automatically do that.

if you want to break in 2nd last iteration itself, you can replace else: with:

To read right end nodes, we will follow the exact same idea as above the only thing we need to change here is the priority for the right child node over the left child node and everything should work as expected.

Note: that we're visiting the only one child node and not the other, for which we're using if elif, but while reading leafs we will be using two seperate if statements.

When we want the result for anti-clockwise then the leafs should be read from left-to-right and for clockwise leafs should be read from right-to-left.
To capture leafs we can create a recursive function, in which we can prioritize visiting left child first for left-to-right result and can prioritize visiting right child first for right-to-left result.

Now if we use above defined methods to Traverse Clockwise, then sequence to use them would be:

And then we will add the above statements all together.

We will follow the same Idea as above, but only in opposite direction, from which we get the following code:

Let's take the diagram we saw above as an example.

Sorry! for the above verbosity.

Since, Binary Tree has some numbers of nodes, then let's its N number of nodes.
Now, the operations we performed on the Tree to get the answer, were,

For lefts and rights, in every iteration, we go down a level in the tree, and there are $\log_2{N}$ number of levels in a Binary Tree.

For leafs, we recursively visit every node in the Binary Tree, and there are $N$ numbers of nodes.

There could be a case when Binary Tree will consist of only two leaf nodes, for example, if we remove Node(1), Node(7) and Node(9) from the above example, then it should create such Binary Tree,
and in this kind of Binary Tree, the Time Complexity will become $O(\log_2{N})$

As for space complexity, when we traverse the Binary Tree we do create a list of nodes found for three different operations

And, there can only exist $\log_2{N}$ numbers of lefts and rights, but for reading leafs, there can exist [1, N/2] of leaf nodes, therefore total space complexity for Boundary Traversing results to

And again if we find only 2 leafs in a Binary Tree then the space complexity can also result in $O(\log_2{N})$.

And In the case of the Binary Tree which is only the root node, will have both Time and Space Complexity of $O(1)$.

With this article at OpenGenus, you must have the complete idea of Boundary Traversal of Binary Tree.

In this article, we will get the basic idea of what is data analysis and look into some tools that are used for data analysis.

Instruction selection involves choosing target-language instructions for each IR statement. In this article we discuss how it can be done by a tree-rewriting process whereby tree patterns that correspond to machine instructions are used to tile a syntax tree.