In this article, we will be going over 50 practice questions related to deep learning.

A neural network, also known as an artificial neural network (ANN), is the foundation of deep learning algorithms. It is inspired by the structure of the human brain. The basic unit in a neural network is a neuron, and neurons are organized into a series of interconnected layers that can send and receive information.

The input layer is the first layer in a neural network. It takes input values and passes them on to the next layers for processing.

The output layer is the last layer of the neural network and produces the network's outputs.

Hidden layers are the layers between the input and output layers. This is where all the computation and "learning" in a neural network is done. Usually, each layer learns different aspects about the data in order to minimize the error or cost function.

A weight is a parameter in a neural network that controls the strength of the connection between two neurons. When a neuron receives an input, it multiplies this input by the corresponding connection's weight.

After the weighted sum of the inputs is calculated, the activation function transforms it into an output that is sent to the next neurons.

The rectified linear unit (ReLU) activation function is a piecewise function that outputs 0 if the input is negative and the original input if it is positive. Mathematically, this can be represented as the following equation:

A Graphics Processing Unit (GPU) is a specialized processor that was originally designed to speed up graphics rendering. It is commonly used in deep learning since it can perform simultaneous computations and can process more data than a Central Processing Unit (CPU).

As a model learns, its weights and biases are updated so that it can minimize the cost or error function. Learning rate is a hyperparameter that controls how much the model's weights are changed every time in response to the estimated error.

The goal of a neural network, while it is training, is to minimize a cost function. Gradient descent is an iterative optimization algorithm used to find a local minimum of the cost function.

Gradient descent needs to calculate derivatives to determine which direction to move in to find a local minimum. Backpropagation is the process of calculating these derivatives. The neural network's error is calculated once the inputs have propagated forward to the output layer. From this output layer, the network error propagates backwards to the input layer, a process called backpropagation. This helps calculate how much the weights of each node need to change in order to reduce the error.

Neural networks do not require you to extract features. They can operate on raw data and learn complex features themselves.

A. Dropout
B. Early Stopping
C. Data Augmentation
D. All of the Above

Explanation: Dropout, early stopping, and data augmentation are all techniques used to prevent overfitting. Dropout works by randomly disabling neurons and their connections, and this prevents the neural network from relying too much on any single neuron. Early stopping is a method that stops training a neural network when its performance on the validation data stops improving. Data augmentation is a technique used to increase the amount of training data and usually causes the neural network to generalize better, thus reducing overfitting. 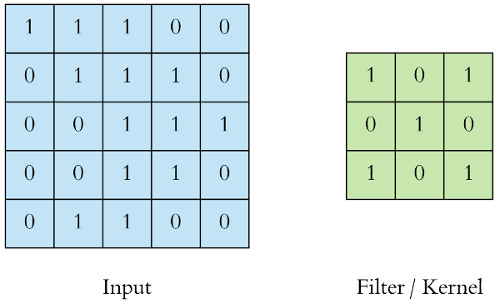 The kernel, or filter, slides across the input image. Each weight is multiplied by the corresponding input pixel, and the sum of these multiplications goes into the feature map. 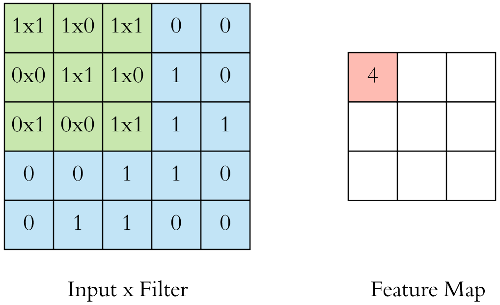 A filter is a matrix of weights that are used to extract features during a convolution. The individual values in the filter are updated during the training process.

The area of the original image that the filter covers is called the receptive field.

A dot product is the sum of the element-wise multiplication between the receptive field of the input and filter. This results in a scalar value, and for this reason, a dot product is sometimes also called a scalar product.

Pooling reduces the dimensionality of feature maps that are generated by convolutions. This reduces the amount of computation that needs to be done but it still retains the significant information, therefore decreasing training time without significant accuracy loss. This is done using a filter that slides across the feature map and represents each individual region with one number. Depending on the type of pooling used, the number used will vary.

Max pooling is when the greatest number in each window is used, as shown below.

Min pooling is when the lowest number in each window is used to represent that region of the feature map.

Average pooling represents each region of the feature map by calculating its average value.

A. Convolutional Layers
B. Pooling Layers
C. Fully-connected Layers
D. All of the Above

A Recurrent Neural Network (RNN) is a type of neural network used to deal specifically with sequences of data. It works well with sequential data because of its internal memory. For example, let's take a look a simple text classification problem. In natural language, the order of the words and the context surrounding those words are used by RNNs, unlike several other approaches. The RNN takes the output of the first word and feeds it into the output of the second word, and this process continues. Every word uses the output of the previous word to help make a prediction. That is why RNNs are used for sequential data, including text classification, named-entity recognition, and time series data.

Long short-term memory (LSTM) networks are a special type of RNN capable of learning long-term dependencies. LSTMs overcome two technical problems - vanishing gradients and exploding gradients, both of which are related to training.

TensorFlow is an open source platform for machine learning that allows developers to create, train, test, and deploy machine learning models, including several types of neural networks. It works with Python, Java, and C++., and can be also used in the browser, mobile applications, and even Raspberry Pi.

A tensor are immutable, multi-dimensional arrays with a uniform type. They are similar to NumPy arrays.

The rank of a tensor is the number of indices required to select an individual element of the tensor. You can think about it as the number of dimensions.

A "rank-0" tensor is one with a single value and no axes.

A "rank-2" tensor is a tensor with two dimensions, or axes. You can think of this is a two-dimensional array or a table of values.

A "rank-2" tensor is commonly referred to as a "matrix".

A tensor's shape is the number of elements in each of its dimensions. For example, a tensor with 2 rows and 3 columns has shape [2, 3]

You can use the tensor's ndim attribute to output the number of dimensions.

The size of a tensor is the total number of items it contains. This can be calculated by multiplying each element in the tensor's shape vector.

TensorFlow provides a size() method that can be used as follows:

There are two methods that can convert a tensor to a NumPy array - np.array and tensor.numpy:

With this article at OpenGenus, you must have a good practice of basic Deep Learning questions. Enjoy.

In this article we are going to learn about what kadane's algorithm is and will also see how to apply it on 3-dimensional arrays to generate a sub-cube with maximum sum of its elements (3D Kadane's algorithm).

Confusion matrix is a term in the field of machine learning which is generally associated with a lot of confusion on what it means, which is exactly what will be removed in this article as we understand confusion matrix.