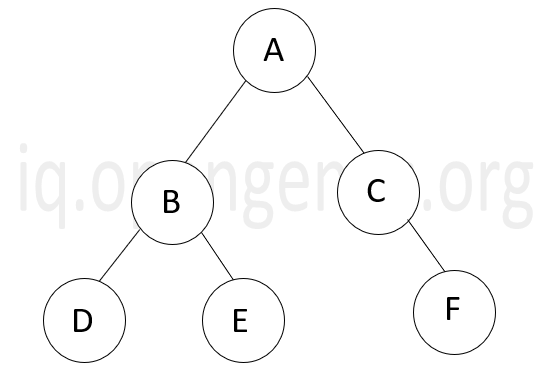 Inversion of a Binary tree

A binary tree can be inverted using either recursion or iteration. For both cases, the basic code for the binary tree node is as follows:

In this method, we invert the given binary tree by swapping the left and right nodes and recursively carrying out the same process for each non-leaf node until we reach the leaf node.

Steps to invert a Binary Tree:

Following is the code to invert a Binary Tree recursively:

This method is similar to the preorder traversal . The given binary tree is inverted using a stack created where the roots are stored and inversion is carried out using the stack operations.

Explanation: In the above code snippet,the class Inversion contains two functions: a swap function to swap the left and right children of the root and an invert function to perform the inversion.

In the invert function, a stack is created and the root is pushed into it at first. Then the top element of the stack is popped and is sent through the swap function and the resultant right and left nodes are pushed into the stack in the same order. This is repeated till the stack is empty.

In this method, the code is similar to level order traversal. A queue is created instead of a stack which stores the roots and the inversion is performed in an orderly manner. For performing queue operations, the queue module is imported as follows:

Explanation: In the above cone snippet too, the class Inversion contains a swap function and an invert function which is for the same purpose as the ones given in

' Iterative solution using stack ' even though both the invert functions differ logically.

In the invert function, a queue is created and the root is added to it at first. Then the left most element i.e. front node of the queue is dequeued and sent through the swap function to swap its left and right children. First, the left child of the popped node is enqueued followed by the right child. This is repeated until the queue is empty.

In the above table, n is the total number of nodes in the tree and h is the height of the tree.

When the iterative methods of inverting a binary tree are considered, in cases of both stack and queue, the addition and deletion operation takes place only once for every node present in the tree. Therefore, the total number of operations perfomed = 2n. And since each node is visited only once, the time complexity is O(n) in both cases. We notice that in both these cases, memory space is occupied only by the stack or queue created whose maximum number of elements can be n (Worst case scenario). So, the space complexity is O(n) for both the cases.

When the recursive method of inverting a binary tree is considered, the time complexity is O(n) as each node of the tree is traversed only once. Since there is recursion, function calls are stored in an auxillary recursion stack. It is to be noted that that the recursive function is called for every level and the worst case scenario is when the function calls of all levels are placed in the auxillary stack. Therefore if h is the height of the binary tree, the space complexity in this case will be O(h).

Upon completion of this article at OpenGenus, you must have a clear understanding on how to invert a binary tree.

In Computer Graphics, Inside Outside is performed to test whether a given point lies inside of a closed polygon or not. Mainly, there are two methods to determine a point is interior/exterior to polygon: Even-Odd / Odd-Even Rule or Odd Parity Rule and Winding Number Method.

This article discusses on a way in which, Binary Search Tree (BST) can be reconstructed when corresponding pre-order traversal of the tree is input, using a concept of monotonic stack.