In Computer Graphics, Inside Outside is performed to test whether a given point lies inside of a closed polygon or not. Mainly, there are two methods to determine a point is interior/exterior to polygon: 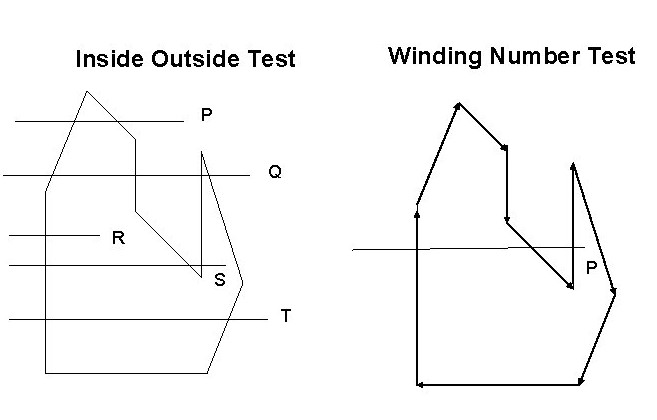 It is also known as crossing number and ray casting algorithm. The algorithm follows a basic observation that if a ray coming from infinity crosses through border of polygon, then it goes from outside to inside and outside to inside alternately. For every two crossings, point lies outside of polygon.

The pseudocode is as follows:

This test fails in case line segment intersects at vertex point. To handle it, few modifications are made. Look at other end points of two line segments of polygon.

Example
In Fig.(a) , it can be seen that points having total odd number of intersections lies inside the polygon and vice-versa. In Fig.(b) representing special case, odd/even count is taken according to side orientation.

Alternative algorithm to perform test is Winding Number algorithm. A winding Number is calculated for given point with respect to polygon. If winding number is non-zero, then point lies inside the polygon. Else, it lies outside of polygon.

Conceptually,to check a point P, construct a line segment starting from P to point on boundary.Treat line segment to be elastic pinned at P. Stretch other end of elastic around the polygon for one complete cycle. Check how many times elastic has been wounded around point P. If count is non-zero, then point lies inside of polygon. Else, outside of polygon.

Another way to score up winding number is to assign a score for each intersection with boundary of polygon and sum these numbers. The score is given by considering direction of edge of polygon with respect to line segment constructed. Hence, directions are assigned to each edge of polygon in counter-clock manner. If side of edge starts from below of constructed line, then score -1 is given. If edge starts from above of constructed line then score 1 is given. Else, score 0 is given. 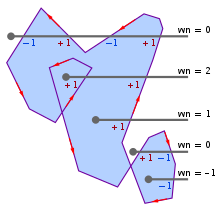 With this article at OpenGenus, you must have a good idea of Inside Outside Tests. Enjoy.

We have covered how to use Console which is one of the development tools in the Chrome browser. The Console in Chrome DevTool helps to debug webpages and investigate external webpage as well.