We have explained 3 different algorithms to Merge K sorted Linked Lists such that the final Linked List is also sorted.

This is similar to Leetcode Problem 23. Merge k Sorted Lists. Let us get started with Merge K sorted Linked Lists.

In this problem, we are given 'k' number of linked lists. All these lists have already been sorted. We need to merge all the given linked list into a single list and in a sorted order.

So all we need to do now is merge the above linked lists into a single sorted linked list, like the one shown in the image below.

There are various approaches to solve this problem. But before we proceed, let's take a quick look at linked lists. Linked lists are a type of data structure, where the values are stored in a list but at different memory locations, instead of being continuous. A linked list is a collection of nodes, and a node is part of the data structure where we can store both a value and reference to the next value (pointer).
Therefore, since a linked list is made up of nodes, and each node is connected to the next node, we need to be careful in our approaches to keep track of each reference/pointer of each node. Otherwise, we might break the list order and lose track of all connected nodes.

Now, let's take a look at some of the approaches we can use to solve this problem.

A simple way to solve this problem is to merge two linked lists at a time and sort them. Within this list, we keep on merging the subsequent linked lists. We do this till all linked lists are merged together into a single sorted linked list. To implement this algorithm, follow the steps mentioned below-

The following code executes the algorithm discussed above.

Another way to solve this problem is using the min-heap data structure. A min-heap is a binary tree where every node's value is greater than or equal to the root/parent node's value. The parent/root node contains the smallest/minimum value. This is depicted in the diagram below. 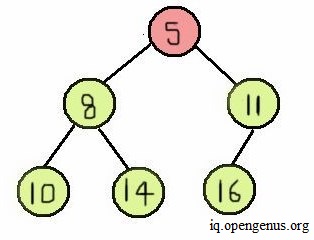 To solve this problem using min-heap, follow the steps below-

The code below implements the algorithm discussed above.

The following program executes the algorithm explained above.

With this article at OpenGenus, you must have the complete idea of how to merge K sorted Linked Lists.

Flood Fill algorithm is an Algorithm that determines the area connected to a given node in a N-dimensional array. Some operations are performed on the connected nodes like color change. This is also known as Seed Fill Algorithm.

In this article, we will understand and explore about the concept of generating k-th lexicographical permutation of first N integers. There are O(N!) permutations but you can find it in O(N) time.