In this article, we will go through the three types of modules in Node.js namely in-built, third party and local modules and explore them with examples.

In Node.js modules system, every file is treated as a module.
Consider a file named index.js which contains the following code -

Here, in the first line, module named square.js is loaded, which is present in the same directory as the index.js.
The contents of square.js are -

Here, square.js has exported its function, area() using the exports keyword, to make it available to other modules.

⭐ Types of Modules in Node.js -

We will be exploring each category with relevant examples.

Built-in modules are the predefined modules in Node.js that need no installation , and can be used anywhere in the application.

Some of the built-in modules are fs, https, url, path, util, etc.
These core modules include bare minimum functionalities of Node.js.Though these modules are loaded automatically when Node.js process starts, we need to include them in our working module first to use it.

So, let's start with the fs(File System) module.fs module provides an API to interact with the files on our system. Common uses of the fs module is to

So, create a directory named node-example, and create a file named index.js and dataIn.txt inside it. Open the directory in your editor.

📝 Step 1: Include the module


To include the fs module, use the require() function with the name of the module, and initialize it to a variable.

Now, we have access to all the functionalities of the File System module through the variable fs.


Now, that we have installed the module in our file, let's use it to read a file and write to a file.


Open dataIn.txt in your editor and write down the following lines in it -

That's a cool fun food fact though. 🍎
The method used to read file synchronously is - readFileSync(). It takes in two parameters - file path, and character encoding.

Write the following code in your index.js

Save your file and Open your terminal and run node index.js

You will see the output on the terminal.

We use the method writeFileSync() to write to a file synchronously. It takes in two parameters - file path, text to be written.

Include the following code in index.js -

You will see the following output on terminal :

Note : In case of writing to a file, fs creates the file itself if not found. You may notice that dataOut.txt is now present in your directory.

So, let's create a module that will take a year of birth as input and will display our age.


So, create a file called ageCalc.js in the same directory.
And include the following code to calculate your age from your dob.

Note :In each module, we have access to a variable called module and on it, we can set the exports property to make it available to other modules.

📝 Step 2 : Including the local modules -


Get back to index.js, and it's time to include ageCalc.js in our code. The syntax remains the same, like that for the built-in modules.

The function that we exported from ageCalc.js, now resides in calcAge.


It is very simple to use the function now, we can call it like any other function present inside index.js. So go ahead, and include the following code in your index.js.

Save the files, and now when you run node index.js in your terminal, you may see the following output -


Third-party modules are developed by others and can be downloaded by Node Package manager(npm). These kinds of modules are not predefined in Node.js and need to be installed explicitly. We can download such modules locally in our project, or globally for the system.
Some of the best third-party module examples are nodemon, express, gulp, lodash, async, socket.io, mongoose, underscore, pm2, bower, q, debug, react, mocha, etc.

In this example, we will be using nodemon.

nodemon is a tool that helps develop node.js based applications by automatically restarting the node application when file changes in the directory are detected.

So, we need not run node index.js every time we save our changes in the file. nodemon runs itself after we save any changes to our file.


We will be installing nodemon globally since it is useful in almost all Node.js applications, and also installing it globally will let us use nodemon as a command-line utility.

Open your terminal and use the command:


After nodemon has been installed successfully, use the command nodemon index.js. Now, let's observe our terminal. Initially the terminal looks like this -

As you may notice, it is waiting for some changes to take place to restart the application. Now, add the following line to your index.js

And save the file. As soon as you save it, you can see the new output on the terminal. This happens because of nodemon. 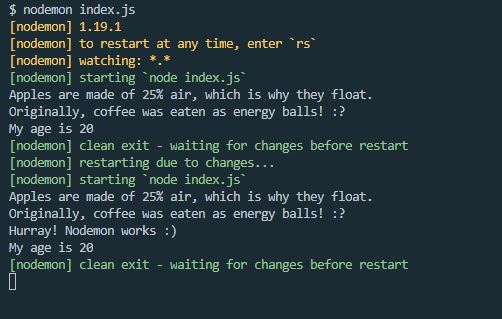 And this is how nodemon and several other 3rd party packages can make our work so easier.


You may read more about Node.js modules here.

In this tutorial, we will a simple web server in Node.js and run it locally on our machine listening to a port. It will response with a text data and HTTP headers.

In this article, we will take you through the basic idea of NodeJS and its package manager NPM, Installation guide and a basic example with When to use it