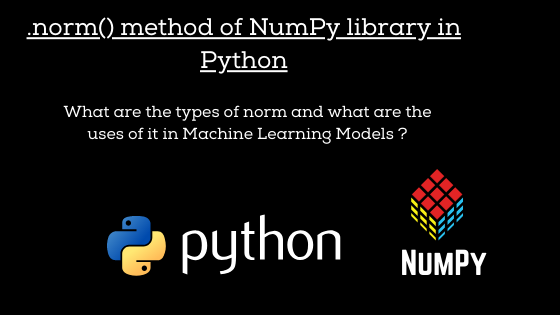 In Machine learning, vectors and matrixes are used extensively to represent features, targets and other parameters and hyperparameters. Calculating the length or magnitude of the vector used in a particular model is often required in several matrix operations or direct implementations in regularization methods. The length of a vector is a positive integer, that speaks on the extent of the vector in space.

In this article, you will know about vector norm and the method to apply them in Python by using the Linear Algebra module of the NumPy library.
In general, three types of norms are used,

This one is also known as "Taxicab Norm" or "Manhattan Norm", represented as
||V||1 ,where V is the representation for the vector. L1 norm is the sum of the absolute value of the scalars it involves, For example,
Suppose you have vector a,

Then the L1 norm can be calculated by,

where |x| is the magnitude of x. Mathematically, it's same as calculating the Manhattan distance of the vector from the origin of the vector space.
In python, NumPy library has a Linear Algebra module, which has a method named norm(), that takes two arguments to function, first-one being the input vector v, whose norm to be calculated and the second one is the declaration of the norm (i.e. 1 for L1, 2 for L2 and inf for vector max).

This one is also known as "Euclidian Norm", represented as ||V||2, where V is the representation for the vector. L1 norm is the square root of the sum of the squares of the scalars it involves, For example,
For the same vecor as above, vector, L2 norm can be calculated by,

Mathematically, it's same as calculating the Euclidian distance of the vector coordinates from the origin of the vector space, resulting in a positive value.
You can use NumPy for this purpose too.

Vector Max norm is the maximum of the absolute values of the scalars it involves, For example,
The Vector Max norm for the vector a shown above can be calculated by,

where |x| is the magnitude of x. Mathematically, it's same as calculating the maximum of the Manhattan distances of the vector from the origin of the vector space.

Suppose, we have a vector V, represented with the help of it's unit vectors in the vector space,

where i, j, k are the unit vectors along x-axis, y-axis and z-axis respectively.
So let's calculate norms manually.

For L1 norm, we need to calculate the distance of each component of the vector along x,y,z-direction from the origin of the vector space, i.e. from O(0,0,0).
Hence we get,

Similarly for L2 norm, we need to follow the Euclidian approach, i.e unlike L1 norm, we are not supposed to just find the component-wise distance along the x,y,z-direction. Instead of that we are more focused on getting the distance of the point represented by vector V in space from the origin of the vector space O(0,0,0).
So we get,

Vector Max Norm is an important concept, which is just concerned about the maximum manhattan distance of any conponent of the vector V in the respective directions, from the vector space. Hence we get,

There are numerous instances in machine learning where we need to represent the entire data set with the help of a singele interger for better comprehension and modeling of the input data. For example,

With this article at OpenGenus, you must have the complete idea of .norm() method of Numpy library in Python. Enjoy.

In this article, we have explained Blockchain intuitively so that a five year old can get the basic idea as well. We have covered concepts like decentralization, immutability, fraudulent transaction, consensus protocol and much more.

Given a list of non-negative integers representing the amount of money of each house, determine the maximum amount of money the robber can rob tonight without alerting the police. We have solved this problem using Dynamic Programming.