SumBasic is an algorithm to generate multi-document text summaries. Basic idea is to utilize frequently occuring words in a document than the less frequent words so as to generate a summary that is more likely in human abstracts.

It generates n length summaries, where n is user specified number of sentences.

SumBasic has the following advantages : 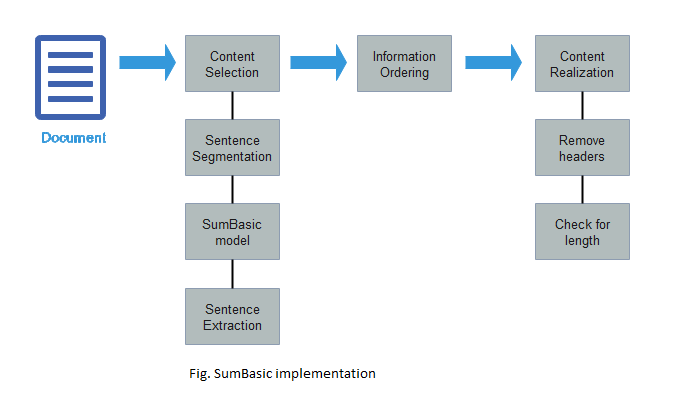 The above figure shows the working of SumBasic on a document.

Where,
n = number of times the word appeared in the input.
N = total number of content word tokens in input.

The step 2 and 3 exhibits the desired properties of summarizer whereas step 3 ensures that the highest probability word is included in the summary every time a sentence is picked.
Step 4 has various uses; updating probabilities on the basis of preceding sentences so that low probability words can also participate and deals with the redundacies.

In simple words, SumBasic first computes the probability of each content-word (i.e., verbs, nouns, adjectives and numbers) by simply counting its frequency in the document set. Each sentence is scored as the average of the probabilities of the words in it. The summary is then generated through a simple greedy search algorithm: it iteratively selects the sentence with the highest-scoring content-word, breaking ties by using the average score of the sentences. This continues until the maximum summary length has been reached. In order not to select the same or similar sentence multiple times, SumBasic updates probabilities of the words in the selected sentence by squaring them, modeling the likelihood of a word occurring twice in a summary.

SumBasic can be implemented using sumy or nltk library in python

sumy is used to extract summary from html pages or plain texts.

The data is processed through various steps to undergo the procedure of summarization :

There are three ways to implement the algorithm, namely:

NOTE- The code implemented below does not use sumy.

Let following picture represents how the above code will be executed :

Data summarization has huge boudaries of its application from extracting relevant informations to dealing with redundancies. Some of the major applications are as follows :

Other Summarization techniques can be as follows :

SumBasic in a technique to implement NLP. It is advantageous as it investigate how much the frequency of words in the cluster of input documents influences their selection in the summary.

Tf-idf stands for term "frequency–inverse document frequency" in which it considers both the frequency of the term in a document and inverse document frequency that is pages of document in which the required terms exist , whereas in SumBasic uses maximum frequent element and so on in decreasing order to determine the context of document or text. Tf-idf is used more frequently used in chatbots and where the machine has to understand the meaning and communicate with the user, whereas summarization is used to provide user with concise information.

In Java, Reflection is a powerful and advanced feature that enables the programmers to inspect or modify the classes, interfaces, and methods of a program running on Java Virtual Machine.

In this article, we will learn how to upload any file from the client side to a folder in the server by buidling a Node.js app.