In this article, we will learn about a beginner-level approach to time series classification.

What is a time series?

Some common examples of time series data include stock prices and historical weather data. Time series is also common in patient health monitoring, such as in an electroencephalogram (EEG), which continuously measures neural activity, and an electrocardiogram (ECG), which monitors heart activity.

What is time series classification?

In this article, we will go over a beginner-level time series classification approach. Using the tsfresh Python library, we will first extract thousands of statistical features for each time series, including variance, skewness, standard deviation, and some more complex ones. We will then store these features in a tabular format, discard the unimportant features, and train a machine learning model on the resulting data.

We will be walking through an application of time series classification used to predict the pattern of user movements in real-world office environments.

This problem involves determining whether or not an individual has moved between rooms based on time series of radio signal strength (RSS) between nodes of a Wireless Sensor Network (WSN).

The dataset was collected and made available by researchers from the University of Pisa in Italy. It is described in their paper An experimental characterization of reservoir computing in ambient assisted living applications.

The dataset can be found in the UCI Machine Learning Repository using this link.

Each of the MovementAAL_RSS_{id} files represents a time series with measurements in chronological order and contains four columns representing the RSS measurements.

Use the following pip commands to install the necessary libraries:

Import some of the main libraries and modules we need:

We will import more libraries and modules when we need them.

Combining and Splitting the Data

We will combine all the individual RSS data files into one dataframe and split the data into 80% training and 20% testing.

These are the first few rows of target_df: 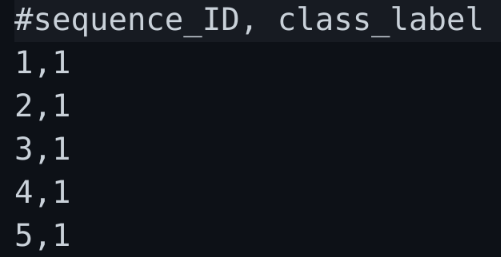 The column #sequence_ID represents the ID of each sequence, and we will later use this ID to refer to the sequence's corresponding time series CSV file.

Next, since there is a space between #sequence_ID and class_label, pandas reads the second column as " class_label", with an extra space at the beginning. We will remove this space so that the data will be easier to use later.

Next, we will create a list containing each sequence's ID.

The code will be much simpler if we split the data before combining each of the individual sequences. By doing this, we will have an ID list of each of the training sequences as well as a separate testing ID list.

Now, we will create two dataframes, one for the training data and the other for the testing data.

Now, will loop through the training sequence IDs and the testing sequence IDs. For each of these sequence IDs, we will read the corresponding RSS time series data CSV file and add it to the main dataframe. We will also add a column for the sequence number and a step column which contains integers representing the time step in the sequence (e.g. whether it is the first or second measurement in the time series).

Now, we will use the tsfresh Python library to extract features.

extracted_features now contains over 3000 columns. Now, we will impute all missing values and keep only the relevant features.

After this, we just have around 300 columns. This reduction will decrease model training time without losing any important information.

Now, let's extract features for the testing data and impute the missing values.

We will keep the same columns we kept in the training data.

We will create a Random Forest classifier composed of 1000 decision trees.

As shown above, our model performs with ~92% accuracy.

In this article, we learned a beginner-level time series classification method. Our final model ended up performing with over 92% accuracy. If you are interested in the results of other models and techniques applied on this dataset, take a look at my GitHub repository.

That's it for this article, and thank you for reading.

In this article, we will learn about the fundamentals of Text Summarization, some of the different ways in which we can summarize text, Transformers, the BART model, and finally, we will practically implement some of these concepts.

This article aims to give a brief overview of the PostgreSQL relational database management system, provide some brief comparisons to other alternatives, such as MySQL, illustrate useful features in PostgreSQL and discuss certain systems in which PostgreSQL proves more useful.