In BERT, GELU is used as the activation function instead of ReLU and ELU. In this article, we have explained (both based on experiments and theoretically) why GELU is used in BERT model.

After reading this article at OpenGenus you will be able to address:

Why GELU activation function is used for BERT?

Theoretical reason why GELU is used in BERT:

Following image demonstrates the non-linearity in the negative range of GELU: 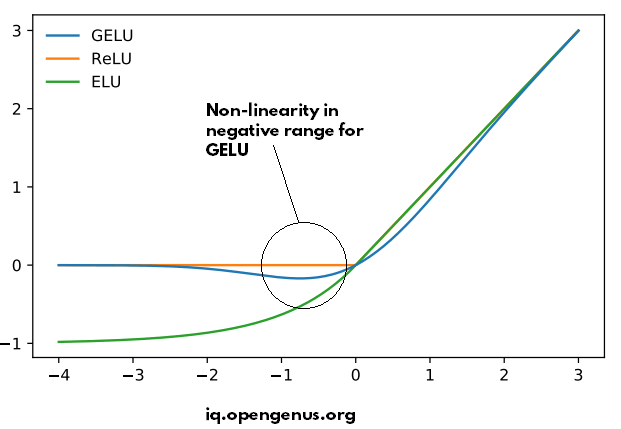 Today, the understanding of parts of Neural Network is not complete and hence, it is difficult to accurately predict which activation function will perform best for a given Deep Learning model.

The current strategy is to select specific activation function intuitively based on the few properties we have identified and then, select one based on experiments.

With this article at OpenGenus, you must have a better idea of why GELU is used in BERT. This is an open-research problem.

In this article, we have explored the Car Pooling Problem in depth and presented an efficient approach to solve it using the concept of Prefix Sum.

In this article, we have explored the concept of Dependency inversion principle in Code Design and explained the concept with an example of Payment System.