In graph theory, graph coloring is a special case of graph labeling ; it is an assignment of labels traditionally called "colors" to elements of a graph subject to certain constraints. In its simplest form , it is a way of coloring the vertices of a graph such that no two adjacent vertices share the same color; this is called a vertex coloring. Similarly, an edge coloring assigns a color to each edge so that no two adjacent edges share the same color, and a face coloring of a planar graph assigns a color to each face or region so that no two faces that share a boundary have the same color.

Chromatic Number: The smallest number of colors needed to color a graph G is called its chromatic number. For example, the following can be colored minimum 3 colors.

The convention of using colors originates from coloring the countries of a map, where each face is literally colored. This was generalized to coloring the faces of a graph embedded in the plane. By planar duality it became coloring the vertices, and in this form it generalizes to all graphs. In mathematical and computer representations, it is typical to use the first few positive or non negative integers as the "colors". In general, one can use any finite set as the "color set". The nature of the coloring problem depends on the number of colors but not on what they are. 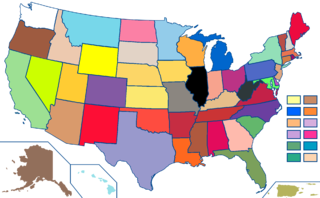 When used without any qualification, a coloring of a graph is almost always a proper vertex coloring, namely a labeling of the graph’s vertices with colors such that no two vertices sharing the same edge have the same color. Since a vertex with a loop (i.e. a connection directly back to itself) could never be properly colored, it is understood that graphs in this context are loopless.

The terminology of using colors for vertex labels goes back to map coloring. Labels like red and blue are only used when the number of colors is small, and normally it is understood that the labels are drawn from the integers {1, 2, 3, ...}.

A coloring using at most k colors is called a (proper) k-coloring. The smallest number of colors needed to color a graph G is called its chromatic number, and is often denoted χ(G). Sometimes γ(G) is used, since χ(G) is also used to denote the Euler characteristic of a graph. A graph that can be assigned a (proper) k-coloring is k-colorable, and it is k-chromatic if its chromatic number is exactly k. 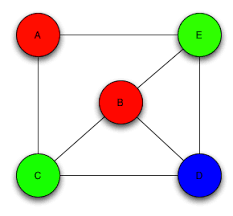 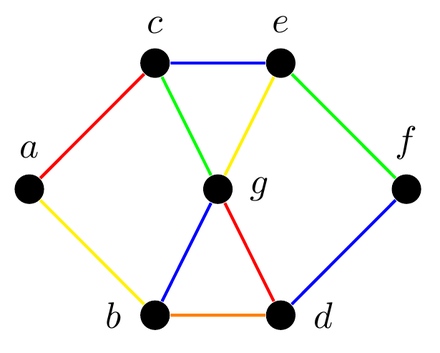 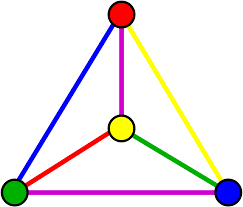 Determining if a graph can be colored with 2 colors is equivalent to determining whether or not the graph is bipartite, and thus computable in linear time using breadth-first search or depth-first search. More generally, the chromatic number and a corresponding coloring of perfect graphs can be computed in polynomial time using semidefinite programming. Closed formulas for chromatic polynomial are known for many classes of graphs, such as forests, chordal graphs, cycles, wheels, and ladders, so these can be evaluated in polynomial time.

If the graph is planar and has low branch-width (or is nonplanar but with a known branch decomposition), then it can be solved in polynomial time using dynamic programming. In general, the time required is polynomial in the graph size, but exponential in the branch-width.

Brute-force search for a k-coloring considers each of the $k^n$ assignments of k colors to n vertices and checks for each if it is legal. To compute the chromatic number and the chromatic polynomial, this procedure is used for every k=1,2,....n-1, impractical for all but the smallest input graphs.

The contraction $G/uv$ of a graph G is the graph obtained by identifying the vertices u and v, and removing any edges between them. The remaining edges originally incident to u or v are now incident to their identification. This operation plays a major role in the analysis of graph coloring.

These expressions give rise to a recursive procedure called the $deletion–contraction algorithm$, which forms the basis of many algorithms for graph coloring.

For chordal graphs, and for special cases of chordal graphs such as interval graphs and indifference graphs, the greedy coloring algorithm can be used to find optimal colorings in polynomial time, by choosing the vertex ordering to be the reverse of a perfect elimination ordering for the graph. The perfectly orderable graphs generalize this property, but it is NP-hard to find a perfect ordering of these graphs.

If the vertices are ordered according to their degrees, the resulting greedy coloring uses at most ma$x_i$ min{d($x_i$)+1,i} colors, at most one more than the graph’s maximum degree. This heuristic is sometimes called the Welsh–Powell algorithm. Another heuristic due to Brélaz establishes the ordering dynamically while the algorithm proceeds, choosing next the vertex adjacent to the largest number of different colors. Many other graph coloring heuristics are similarly based on greedy coloring for a specific static or dynamic strategy of ordering the vertices, these algorithms are sometimes called sequential coloring algorithms.

The maximum (worst) number of colors that can be obtained by the greedy algorithm, by using a vertex ordering chosen to maximize this number, is called the Grundy number of a graph.

In a symmetric graph, a deterministic distributed algorithm cannot find a proper vertex coloring. Some auxiliary information is needed in order to break symmetry. A standard assumption is that initially each node has a unique identifier, for example, from the set {1, 2, ..., n}. Put otherwise, we assume that we are given an n-coloring. The challenge is to reduce the number of colors from n to, e.g., Δ + 1. The more colors are employed, e.g. O(Δ) instead of Δ + 1, the fewer communication rounds are required.

A straightforward distributed version of the greedy algorithm for (Δ + 1)-coloring requires Θ(n) communication rounds in the worst case − information may need to be propagated from one side of the network to another side.

Decentralized algorithms are ones where no message passing is allowed (in contrast to distributed algorithms where local message passing takes places), and efficient decentralized algorithms exist that will color a graph if a proper coloring exists. These assume that a vertex is able to sense whether any of its neighbors are using the same color as the vertex i.e., whether a local conflict exists. This is a mild assumption in many applications e.g. in wireless channel allocation it is usually reasonable to assume that a station will be able to detect whether other interfering transmitters are using the same channel (e.g. by measuring the SINR). This sensing information is sufficient to allow algorithms based on learning automata to find a proper graph coloring with probability one

Graph coloring is computationally hard. It is NP-complete to decide if a given graph admits a k-coloring for a given k except for the cases k ∈ {0,1,2} . In particular, it is NP-hard to compute the chromatic number. The 3-coloring problem remains NP-complete even on 4-regular planar graphs. However, for every k > 3, a k-coloring of a planar graph exists by the four color theorem, and it is possible to find such a coloring in polynomial time.

First, get an overview of different approaches of the Graph Coloring problem:

We have explored how to work with images and manipulate them in Python using PIL (Python Image Library).