In this article, we will get an understanding of Time Series Data along with different types of time series, analysis and forecasting.

In time series, we have a collection of observations of a single entity at different time intervals. Here, we distinctly have 'time' as an axis and this axis plays a major role. Eg: Sales of 4 ice cream flavors in Seattle on every Saturday.

In cross-sectional data, our data consists of observations of many entities at a single point in time. Eg: Sales of the same 4 ice cream flavors in Seattle, Berlin and Shanghai on Christmas day in the year 2020.

Panel data is a collection of observations of many entities at multiple time periods. It is also known as cross-sectional time series data as it is a combination of the two. Eg: Sales of the same 4 ice cream flavors in Seattle, Berlin and Shanghai on every Saturday.

As we discussed previously, when our data has observations for a single entity where the data points are ordered in time, it is referred to as time series data. Given below is an example of time series. 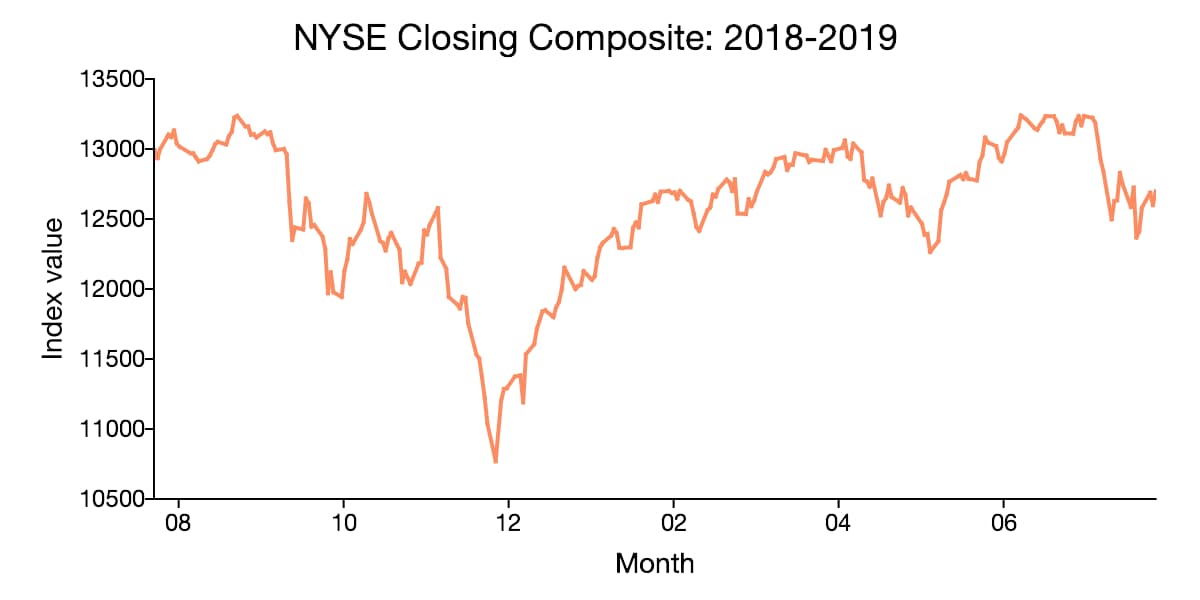 The time intervals may or may not be equally be spaced. It is known as regular time series if the data points are at regularly spaced time intervals. For example: weekly weather data and stock data on the hour over the business day. Else, it is called irregular time series. For example: event logs. If our data contains only one variable that is varying over time, then it becomes univariate time series. If there is more than one variable changing with time, it is known as multivariate time series.

There are four broad types of time series:

When our time series does not contain probabilistic aspects and can be expressed by an analytical expression, it is known as deterministic time series. With the help of this expression, we can predict its behavior in future and also get to know how it behaved in the past.

yi = ci + ε is an example of linear deterministic time series. This will basically produce a straight line in time, with some tiny fluctuations at each point.

When our time series contains probabilistic aspects and cannot be expressed by an analytical expression, it is known as non-deterministic time series. Since it has a random aspect, it follows the laws of probability and the data is defined by distributions, variances, averages and other statistical expressions. Example: an electroencephalogram (EEG) time series.

Time series analysis (TSA) is the method of analyzing time series data and extracting useful insights and other valuable statistical information from it, by using statistical methods. It is useful for forecasting as TSA helps us find the nature of the time series and also examine how a certain data point changes when other influencing variables are changed over a time period.

Time series is widely used in many areas such as finance, marketing, healthcare industry and many more.

With this article at OpenGenus, you must have the complete idea of Time Series Data.

In this article, we will explore Empirical Risk Minimization (ERM) technique used in machine learning.

The aim of this article is to discuss the Denoising Autoencoder (DAE) in sufficient detail. Hopefully, by the end of the article, readers would have obtained an understanding of the denoising autoencoder.