In this article, we have explored the Gift Wrap Algorithm ( Jarvis March Algorithm ) to find the convex hull of any given set of points.

Convex Hull is the line completely enclosing a set of points in a plane so that there are no concavities in the line. More formally, we can describe it as the smallest convex polygon which encloses a set of points such that each point in the set lies within the polygon or on its perimeter.

The convex hull is a ubiquitous structure in computational geometry. Even though it is a useful tool in its own right, it is also helpful in constructing other structures like Voronoi diagrams, and in applications like unsupervised image analysis.

We can visualize what the convex hull looks like by a thought experiment. Imagine that the points are nails sticking out of the plane, take an elastic rubber band, stretch it around the nails and let it go. It will snap around the nails and assume a shape that minimizes its length. The area enclosed by the rubber band is called the convex hull of . This leads to an alternative definition of the convex hull of a finite set of points in the plane: it is the unique convex polygon whose vertices are points from and which contains all points of .

In computational geometry, the gift wrapping algorithm is an algorithm for computing the convex hull of a given set of points


The idea of Jarvis’s Algorithm is simple,

We start from the leftmost point (or point with minimum x coordinate value) and we keep wrapping points in counterclockwise direction.

The big question is, given a point p as current point, how to find the next point in output?

Following is the detailed algorithm. 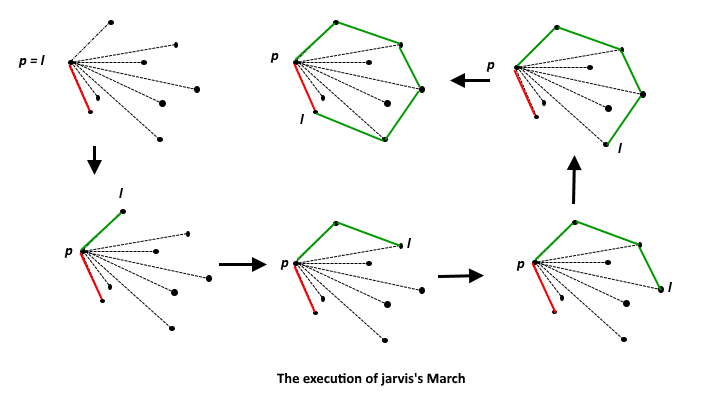 
The pseudocode of Gift Wrap Algorithm ( Jarvis March Algorithm ) is as follows:


Implementation of Gift Wrap Algorithm ( Jarvis March Algorithm ) in C++ is as follows:


The inner loop checks every point in the set S, and the outer loop repeats for each point on the hull. Hence the total run time is O(nh).
The run time depends on the size of the output, so Jarvis's march is an output-sensitive algorithm.
In worst case, time complexity is O(n^2). The worst case occurs when all the points are on the hull (h = n)


The applications of this Divide and Conquer approach towards Convex Hull is as follows: 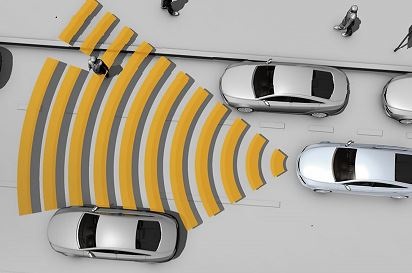 What is the time complexity if Jarvis March algorithm is used in 3D space?

O((number of faces) X n)
O((number of edges) X n log n)
O(n^3)
O((number of edges) X log n)
The convex hull of n points in three-dimensional space can be constructed in O(n log n) time by the divide-and-conquer algorithm, and this time complexity is known to be optimal. Another famous algorithm is "gift wrapping," which runs in O(kn) time, where k is the number of vertices on the boundary of the convex hull. This algorithm is not optimal because k can be as large as n in the worst case, but it is still practically important because its time complexity is much smaller if k is small (e.g., linear in the case where k is a constant).

Graham's Scan Algorithm is an efficient algorithm for finding the convex hull of a finite set of points in the plane with time complexity O(N log N). The algorithm finds all vertices of the convex hull ordered along its boundary. It uses a stack to detect and remove concavities in the boundary.

Divide and Conquer algorithm to find Convex Hull. The key idea is that is we have two convex hull then, they can be merged in linear time to get a convex hull of a larger set of points. It requires to find upper and lower tangent to the right and left convex hulls C1 and C2