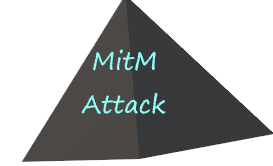 Man In The Middle (MitM) is a type of cyber attack in which a hacker intercepts the communication between two people either to eavesdrop or to impersonate one of the person. The aim of the attack is to steal financial details such as account details, credit card numbers or sensitive details such as log in and password information of social websites.

Procedure to do Man in the Middle attack

Mitm Attack can be done in two ways:

Passive Attack: In this type of MitM attack a hacker only eavesdrop between the communication, he doesn't actually tamper any data.

Active Attack: In this type of MitM attack a hacker tampers the data between the communication.

Let's understand the procedure with the help of an example:
Ally - First Person
Raksha - Second Person
Andy - Hacker
These three works in the same company.

Never share any credentials or even do the financial related work on the public wifi. Use the best VPN for communicating so that no one can intercept between the communication. Avoid connecting to the Wifi connections that aren't password protected. For website operators, use TLS and HTTPS protocols so that all data is transmitted encrypted.

What does MitM stands For?

What intercept tool can be used for MitM Attack?

Distributed Denial Of Service (DDoS) is a form of cyber attack which is done to make target online services unavailable to the users. The attack disrupts the normal traffic of a targeted server, network or service by overwhelming the target or its surrounding infrastructure

Denial Of Service Attack is a form of cyber attack basically used by hackers to prevent the victims from accessing any legitimate service. This hacker floods the web servers with excessive traffic in order to succeed in this attack. The attack does not result in theft or loss of data