In this article, we have explained the Time and Space Complexity analysis of Bucket sort along with its algorithm, space complexity and time complexity for worst case, average case and best case.

Bucket Sort is a type of sorting algorithm in which the individual elements of the input array are distributed into several groups which are known as buckets. One bucket is capable of holding more than one element simultaneously. Each bucket is then sorted individually, either by making use of some other sorting algorithm, or by recursively applying the same bucket sorting algorithm.

Finally, when each bucket has been sorted, they are then combined to form the final and complete sorted array.

Bucket sort is especially useful when we are dealing with floating-point values.
Here is the algorithm for bucket sort:

Now let us understand as to how this algorithm works with the help of an example.
Suppose we want to sort the following array by using Bucket Sort.

Let's follow the algorithm now to sort the array through Bucket Sort.

Therefore, the element present at arr[0], which is 5.16, will be inserted to the bucket at index 3.

Following this step for each element, we will get our final bucket list as follows: 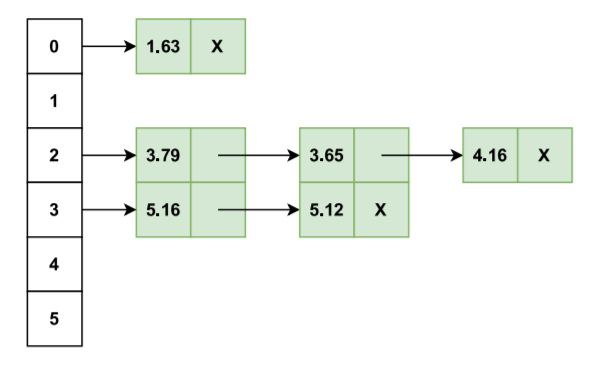 When you move down in the bucket list from the first index (0) to the last index (5), you will notice that we already have our complete sorted array there. We just simply have to extract it from the bucket list in a similar manner.

The time complexity in Bucket Sort largely depends upon the size of the bucket list and also the range over which the elements in the array/list have been distributed. For example, if the elements in the array don't have a significant mathematical difference between them, it could result in most of the elements being stored in the same bucket, which would significantly increase the complexity of the algorithm.
Consider the following snippet from the algorithm (step 5):

The worst case time complexity of Bucket Sort (for our example) should be?

As mentioned earlier, if the elements in the array don't have a significant mathematical difference between them, it could result in most of the elements being stored in the same bucket, which would significantly increase the complexity of the algorithm.

The scenario when every element is stored in the same bucket is when the worst case in terms of time complexity actually happens.

Therefore, we get a total runtime of O(n²).

In our bucket sort algorithm, we have four loops (step 1, step 3, step 4 and step 5) which iterate over k buckets and n elements.

The average case occurs when the elements are distributed randomly in the list. Bucket sort runs in linear time in all cases until the sum of the squares of the bucket sizes is linear in the total number of elements.

It takes O(n) time in order for us to assign and store all the elements of the input array into the bucket list.

Since we are using the Bubble sort algorithm to sort each bucket individually, step 4 (from our algorithm) would cost us O(n²) time.

However, we will need to compute its complexity for the average case.
Step 4 (bubble sort sorting) of our algorithm costs:

Since we are concerned with computing the average time, E(nᵢ²) (expectation) is what we are interested in.

Let Xij be the random variable that is 1 if element j is placed in the bucket i, else it will be 0.

We have the value of nᵢ as:

Now the summation has been divided into two cases, which are:
(a) j = k
(b) j ≠ k
Since there are k buckets, the probability that an object is distributed to bucket i is 1/k.
The value of Xij is 1 with probability 1/k else it is 0. Therefore, we get:

Computing it with the summation now, we get:

The complexity then becomes:

As our final step, we have to concatenate our elements back together in the form of an array to produce our final sorted array. Since there are k buckets, this step will cost us a total of O(k) time.
Hence, finally, we come to the conclusion that the average case time complexity for this algorithm will be
O(n + n²/k + k).
Keep in mind that if k is chosen to be Θ(n), then bucket sort runs in O(n) average time, provided that we have a uniformly distributed input in the form of an array or list.

The best case in Bucket sort occurs when the elements are distributed in a balanced manner across the buckets, i.e., the number of elements spread across in each bucket are identical.

Comparison with other sorting algorithms

Let's find out as to how the Bucket sort algorithm fares amongst its other counterpart sorting algorithms.

With this article at OpenGenus, you must have the complete idea of Time and Space Complexity of Bucket Sort.

We have explored the different types of views of the binary tree (like Left, Right, Top and Bottom View) and discussed how to find them.

This article explain the differences between Array and Linked List (Array vs Linked List) in depth along with key points that will help you in deciding which one to use for a specific problem.