In this article, we will take a look at the various Storage Devices that are used in computing cost, applications and their characteristics.

What is a Computer Storage?

A storage device or memory is an essential component of all computers that retain information and data. Even the operating system needs to be stored somewhere. Without storage, a computer is like a car without wheels.

Storage can be broadly classified as Primary and Secondary Storage.

Primary memory consists of ROM and RAM and is closely located near the CPU enabling quick access. CPU can directly access the primary memory.

Main Memory or DRAM
DRAMs are used to store the data and programs that the CPU immediately needs. A Dynamic RAM (DRAM) is made with cells that store data as the charge on capacitors. Because capacitors have a natural tendency to discharge, Dynamic RAMs require periodic charge refreshing to maintain data storage. This tendency of stored charge to leak away is what gives Dynamic RAM its name.

Traditionally DRAM was Single Data Rate(SSR) that is it can only read/write once in a clock cycle. But newer DRAMs are Dual Data Rate(DDR). DDR is available in different versions such as DDR2, DDR3, DDR4, and the latest being DDR5. Each new version is faster than the previous one. 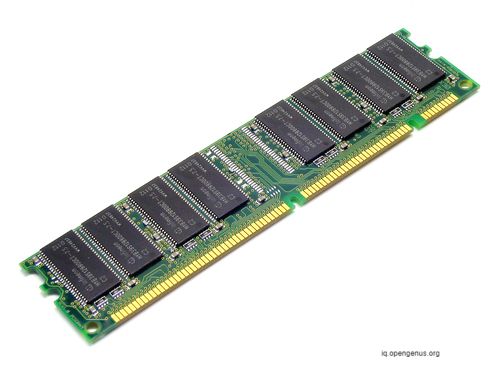 Static RAM (SRAM)
SRAM differs from DRAM in the fact that it can hold the data as long as power is supplied to it without the need to be refreshed. SRAMs are also faster than DRAMs and more expensive. Hence SRAM is used only in a small amount. The 2 important types of SRAM are

Registers
Registers are a small amount of storage that is present within the CPU itself. Most modern CPUs have a few hundred of them. They are used to store instruction, addresses, or data that needs to be immediately used by the CPU. There are several types of registers. Some of the important ones are shown below. 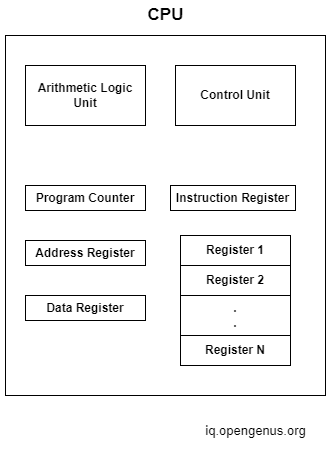 Registers 1 - N are called General Purpose Registers. They are used to store temporary data during the various arithmetic and logic operations.

The number of registers depends upon the CPU Architecture.

Cache
The next type of storage is cache memory. The cache is usually located in the CPU chip itself or very close to the CPU, so that data can be accessed faster than the RAM. Cache stores frequently used data so that they do not need to be recomputed.

Most modern computers use three levels of cache as shown below.

In ROM, data can only be read and cannot be re-written. It is a type of non-volatile primary memory and retains information even when power is turned off. Thus it can be used for long-term storage. ROM is typically used for storing the firmware and code required to load the operating system. They have speeds a bit less than RAM.

There are many types of ROM. The three main ones are,

PROM
PROM stands for Programmable Read-Only Memory. It is programmed using a burner or PROM programmer after manufacturing and cannot be reprogrammed again. The PROM programmer blows the fuse switches in PROM which is irreversible.

EPROM
EPROM stands for Erasable Programmable Read-Only Memory. EPROM is similar to PROM but it can be reprogrammed by exposing it to ultraviolet light and then burning it.

EEPROM
EEPROM stands for Electrically Erasable Read-Only Memory. The difference between EPORM and EEPROM is that EEPROM can be erased and reprogrammed by the device it is installed without having to remove it. The number of times it can be reprogrammed is limited to about 100k times.

There are various types of secondary storage. Some of the important ones are listed below.

Hard Disk Drives (HDD)
Hard disks are one of the most popular choices for secondary storage. It consists of rotating platters coated with magnetic material and moving read and write heads. The platter is divided into concentric circles called tracks and each track is further divided into a sector. To read or write to a sector, the head must move to the right track and the platter must be rotated to the right sector. 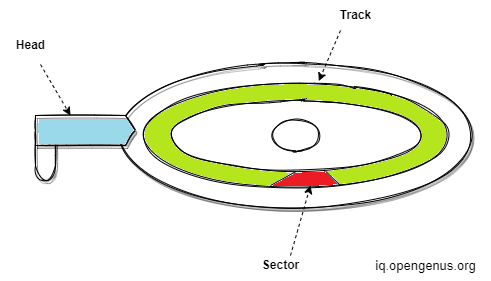 The performance of the HDD depends upon the rotations per minute(RPM). The most common RPMs are 5,400 and 7,200.

Unlike Hard disks, SSDs have no moving parts and have lower chances of failure. They are also very fast compared to Hard disks and use minimal energy. There are several types of SSDs depending upon the connection interface. Two notable ones are SATA and the newer NVMe which uses the PCIe bus.

SSDs which can be directly plugged into the motherboard is called M.2 SSDs.

Magnetic Tapes
Magnetic tapes consist of a thin plastic film coated in a magnetic material. It is a sequential data access medium; that means you have to access the data in order. They are mainly used for storing video and audio.

The magnetic tape is subject to degradation and hence not used for long-term storage. Magnetic tapes although losing popularity, are being used for emergent technologies like Artificial Intelligence(AI), Internet of Things(IoT), etc.

Optical Drives (CD/DVD)
Optical drives use laser beams to read and write data into optical disks. CD stands for Compact Disc and provides storage of up to 700MB. It consists of a polycarbonate disc with pits indented into it which is used to store the data.

DVD stands for Digital Versatile Disc. DVDs are more advanced than CDs providing faster and increased storage of up to 17GB.

An extension of DVD called Blue-ray which uses a violet laser, which allows information to be stored at a greater density than is possible with the longer-wavelength red laser used for DVDs was released in 2006.

Network storage can also be considered secondary storage. It consists of storage devices connected over the network. It includes Storage Area Network or SAN, Network Attached Storage or NAS, and Cloud Storage.

NAS provides high capacity, ease of access, and reduced cost. It can also be scaled up and down very easily when needed. It is used in distributed systems for sharing data between several computers

Cloud Storage
Cloud storage provides remote, distributed, scalable, highly available storage over the internet. Storage can be provisioned as needed. Cloud storage also supports the recovery of data in case of a disaster. It uses a pay-per-use model and is offered by most major cloud providers like AWS, Google Cloud, Azure, OneDrive, etc.

The cloud provider is responsible for the security of the data and the management and maintenance of the storage. Cloud storage can be public, private, or hybrid.

With this article at OpenGenus, you must have the complete idea of Types of Storage Devices.

In this article we have discussed three languages operations namely, union, concatenation and kleen closure.

In this article, we have explained Conv2D operation in TensorFlow along with API definition and Python implementation.