In this article, we have explored how to implement Bubble Sort in parallel on multiple threads / cores. We have presented two approaches: one is slower than the sequential approach but the other approach is significantly faster than all other approaches for large input.

Parallel bubble sort is a parallel implementation of the classic Bubble sort algorithm. The concept of parallelism involves executing a set of instructions/code simultaneously instead of line by line sequentially (the traditional way the code is executed in most machines and computer programming generally).

The main benefit of this is faster computation. Implementation of parallelism depends on some factors. For example, if there are parts of code that can be implemented independently and executed irrespective of any order, then we can execute at the same time. However, some parts of the program may still require other parts of the program to run first.

This way, even though the programs are sequential, we can implement some degree of parallelism. We can also design our algorithms in such a way that the parts of the program run sequentially.

In parallel sorting, we transform the already existing traditional sorting algorithms in a way such that during execution, instead of sequential execution of algorithm’s instructions.

In Parallel Bubble Sort, we divide sorting of the unsorted into two phases- odd and even. We compare all pairs of elements in the list/array side by side (parallel).

When comparing, just like in normal bubble sort, we swap the elements, if the initial element is greater than the next element in comparison.

Both phases occur one after the other and the algorithm stops once no swap occurs in both odd and even phase.

The process of parallel bubble sort is shown below. 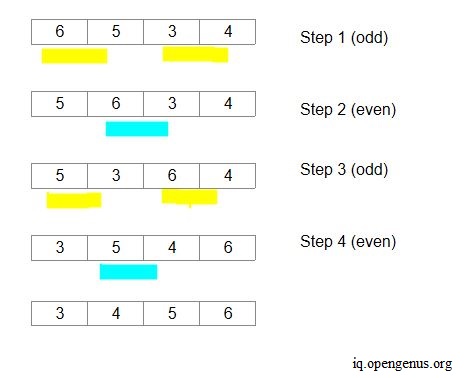 In the case of multi-core processors, both phases can occur simultaneously, which is known as parallel implementation.

To implement a parallel version of bubble sort, follow the steps mentioned below-

Using Python's threading module, we can actually implement our algorithm in parallel. This module allows us to create threads, where each thread is considered as a single process that run within our program. We can think of threads of tasks or a set of instructions that make our program. Usually, all tasks in our program are implemented sequentially. However, using threads, we can run these tasks concurrently. This way, our program can run much faster. However, depending on the computer's memory and processor core, creating threads sometimes creates inefficiency as well.

To implement the bubble sort algorithm using threads, follow the steps mentioned below-

This approach with threads takes more time because the overheads of creating threads are more. Since in each phase, odd or even, we only compare two elements at a time till the end of the list, and then separately create a thread, the runtime increases. Increase time happens because of starting a new thread and stopping the said thread each time. The costs of creating such threads, on top of comparing two elements, lead to increased runtime. This algorithm requires some calculations and is CPU bound. This means that greater the calculations, the more CPU resources, both in terms of software and hardware, are required.

Another way we can bubble sort a list using threads is by dividing the list into smaller sublists. The number of sublists we create depends on the number of cores in the system. Each core can ideally run two threads. So in a dual-core system, we can use four threads.

Then we create a thread for each sublist and run bubble sort parallelly in each sublist. Finally, we merge all sublists into a sorted list.

To implement this algorithm, follow the steps mentioned below-

With this article at OpenGenus, you must have the complete idea of Parallel Bubble Sort.

In this article, we have listed and explained Different Code Optimizations in Compiler Design such as Peephole optimization, loop unrolling, Loop-invariant code motion and much more.

In this post, we discuss the average height of a Random Binary Search Tree (BST) (that is 4.31107 ln(N) - 1.9531 lnln(N) + O(1)) by discussing various lemmas and their proofs. We omit full proofs and discuss the essential key points for easier understanding.