In this post, we dicuss Pick's theorem, its proof and example use cases where its application would be efficient to solve a problem. Using Pick's Theorem, we can compute the area of simple polygons. 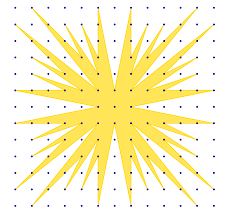 Pick's theorem allows us to easily compute the area of simple polygons (a polygon without holes) whose vertices are on points of an evenly spaced grid.

We will start by proving that three polygons with same number of interior points and boundary points have the same area.

The above polygons have an 2 interior points and 4 boundary points an all have an area of 3.

Now we try to find that formula to compute this based solely on boundary points and interior points.

We use the the following polygons below to create sample data which we shall use to derive a formula.

Data collected is the following

We plug the numbers into the formula and we have the following 3 equations.

Therefore we have the following general equation a = I + - 1.

Pick's theorem: The area of every simple polygon whose vertices lie line on the points of a grid is
.

Given the polygon below

Let P1 and P2 be two polygons joined by a common side S, and P be the big polygon.
We denote picks theorem by
We prove want to prove that

Combining the two formulas we get the following,

Suppose picks theorem holds for P1 and P2 joined by S in example 1,
and .

We prove that picks theorem also holds for the polygon P that is .
The area of P is the sum of the areas of P1 and P2 that is and by proof 1 .
That is, and therefore .

We have shown that given a polygon we can join common polygons using common sides to construct the whole, that is combining the areas from two interior polygons of a whole will give the area of the whole.

We state that every polygon can be decomposed into triangles.
By this statement we have to come up with a proof for pick's theorem for triangles after which it goes to show that pick's theorem is true all polygons.

To come up with a proof of pick's theorem for triangles we are going to use the proof from rectangles with horizontal and vertical sides.

We prove that picks theorem is true for rectangles with vertical and horizontal sides.

Let R be the rectangle.
We can see the rectangle as a union of squares of side of 1.
From the result of example 2, we just have to prove the theorem for the smaller squares formed by the grid.
The squares have an area of 1, 4 boundary points and no interior points hence we have the following,

We will use the proof from this example to prove picks theorem for triangles.

We classify triangles into 3 groups.

We see that rectangle R is a union of triangle T and and another triangle like T. And by using proof 1 we have, .

By proof 3, picks theorem holds true for R that is,

By substituting and and dividing by 2 we have
and with that we have proved that it holds true for triangle T.

We see rectangle R is a union of triangles T, T1, and T2 where T1 and T2 are triangles of type 1 which we have proved in 1 above.
Using proof 1,

By combining the four four inequalities we have 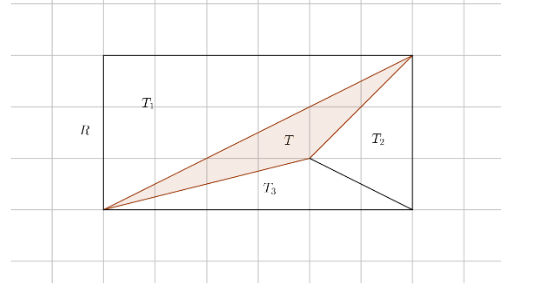 In the above diagram we see that only two vertices lie in the boundary of R.

In proof 3, 4 and 5 we have proved the theorem holds for R, that is T1, T2 and T3 respectively, with the same argument from proof 4 and 5, we find picks theorem must hold true for T too.

Some applications of pick's theorem

Rust has multiple built-in ways to terminate the program, and every method has specific behavior whenever it's called. We're going to see how different functions in Rust (which we use to exit the program) act and how to use them.