This article is for those people who are going to willing to build their career in python and data analysis. Most of you reading this post are probably familiar and heard about Pandas, and have probably used it in many projects.

But too those who have never used it or are completely new to this,
Pandas is one of the most used python libraries for understanding data and manipulating it. 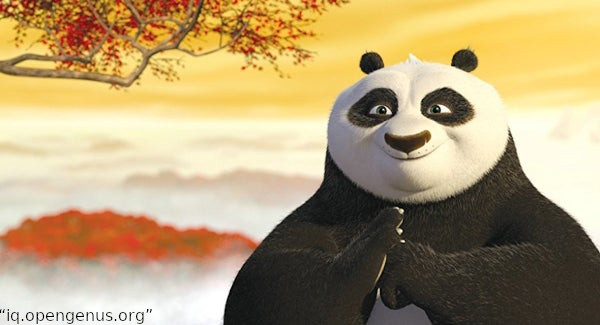 I personally use pandas on an almost daily basis, because of its easy to access syntax and rich functionality. Hope after reading this article, it will help you dive into the ocean of data analysis with python and pandas.

This article is structured as follows:

What is Pandas? Pandas is an extremely popular open-source library, for handling tabular data, data manipulation and its analysis.

Why to use pandas?

As per the official documentation:

”fast, flexible, and expressive data structures designed to make working with “relational” or “labeled” data both easy and intuitive.”

In short Pandas is a data wrangling library.

How to install Pandas?

If pip is being used, pandas can be installed as:

For importing pandas to be used, we use a well used abbreviation as

The basic data structure of Pandas is DataFrame which represents data in tabular form with labeled rows and columns.

Series is a one-dimensional labeled array capable of holding any data type (integers, strings, floating point numbers, Python objects, etc.).
The axis labels are collectively referred to as the index. It is an object which is similar to Python built-in list data structure but differs from it because it has associated label with each element or so-called index.

The basic method to create a Series is to call

We use the pd.Series() command, and provide a list.
If index is not provided explicitly, then pandas creates RangeIndex starting from 0 to N-1, where N is a total number of elements. We also can create a Series from an 1-dim Numpy array.

Series has attributes to extract its values and index

You can retrieve elements by the particular index number

Because Series is very similar to dictionary, where key is an index and value is an element, we can do this

How Pandas Series is different from 1-D Numpy Array?

How to Create Pandas DataFrames?

We can create pandas dataframe from dictionaries,json objects,csv file etc. 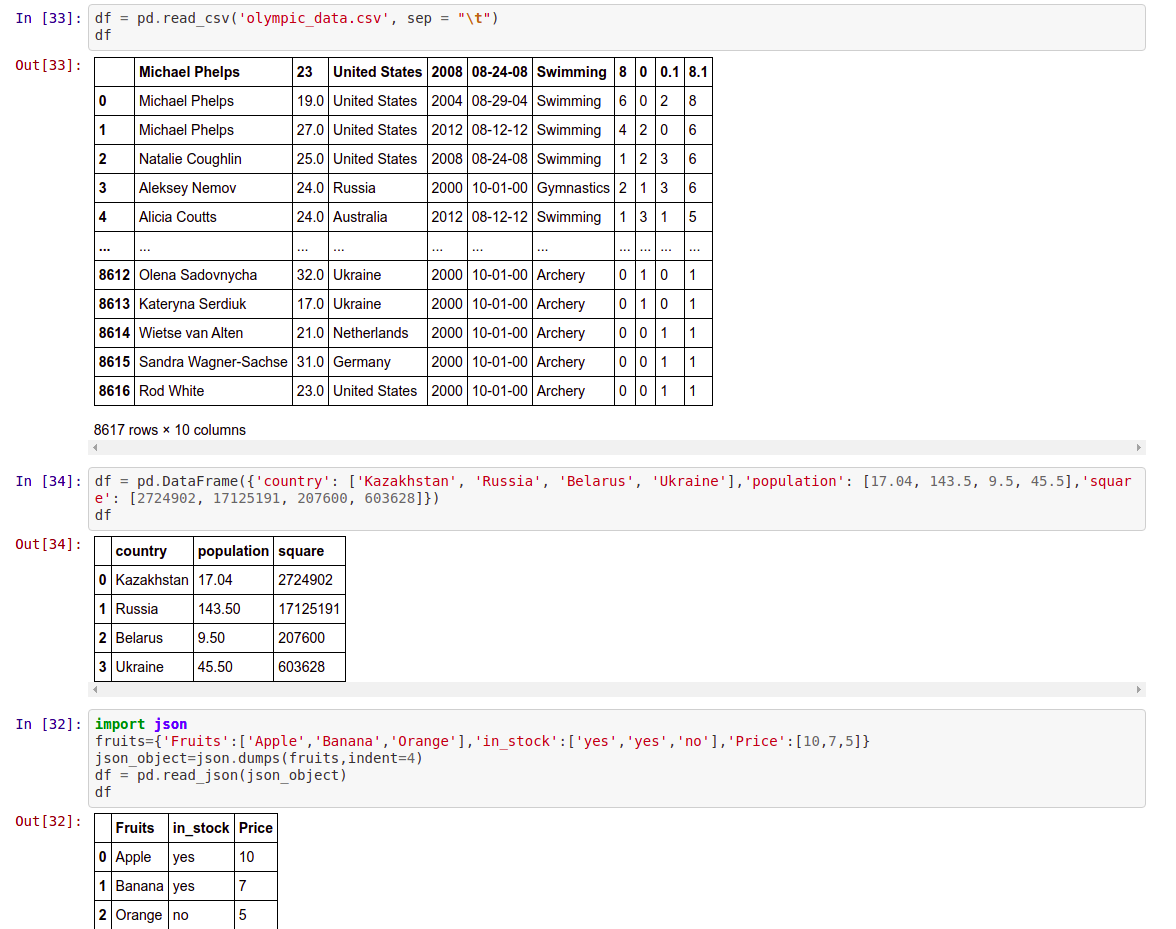 The first thing we should do, once we have downloaded or collected some data is to read such data into a pandas DataFrame. This is one of the main Pandas objects, along with the Series, and like I mentioned before, it resembles a table with columns and rows.

The method read_csv, reads data from a csv file that is located in the same directory as the script or notebook that we are running the code from. Pandas also has functions for reading from Excel sheets, HTML documents, or SQL databases.

df.shape → Return the number of rows and columns of the dataframe.

df.info() →It prints the concise summary of the dataframe. This method prints information of the dataframe like column names, its datatypes, nonnull values, and memory usage 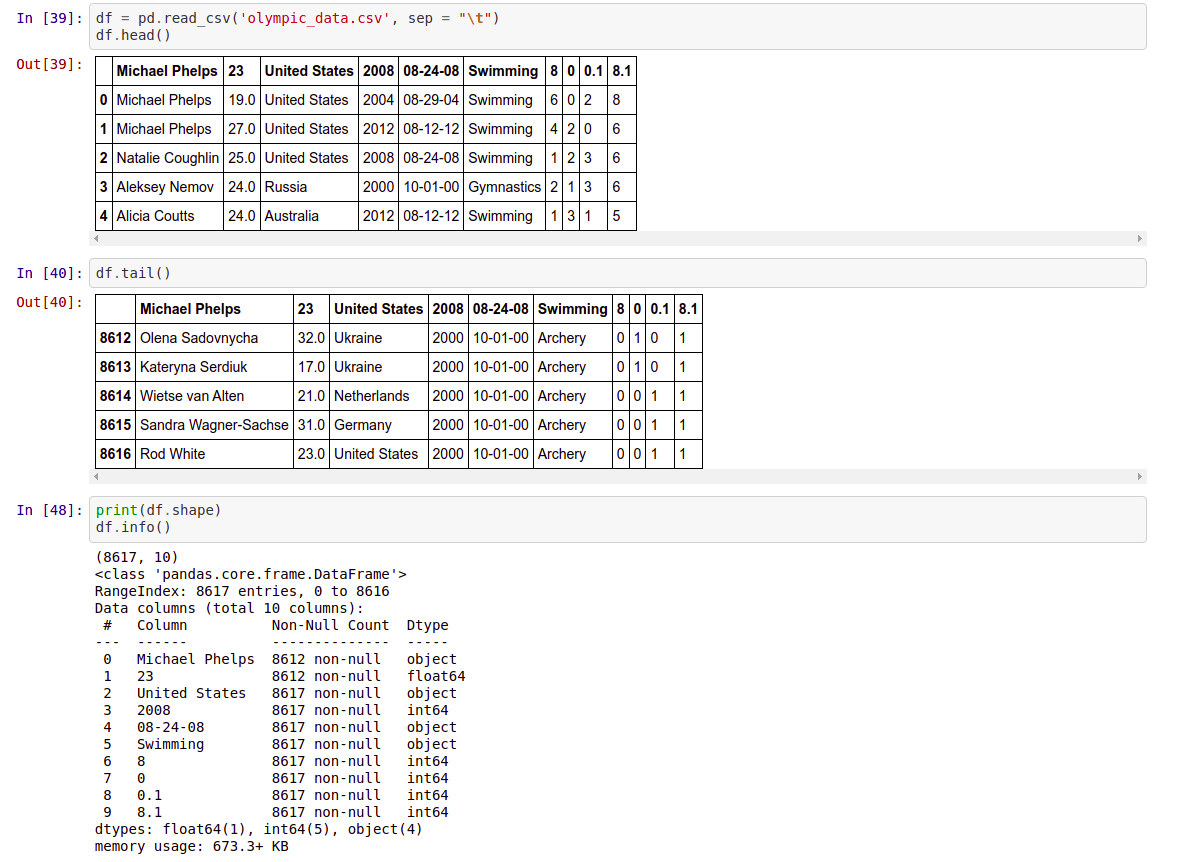 df.dtypes → Returns a series with the datatypes of each column in the dataframe.

df.to_numpy() → This also returns the NumPy representation of the dataframe.

df.columns → Return the column labels of the dataframe

df.describe() → Generates descriptive statistics. It describes the summary of all numerical columns in the dataframe. 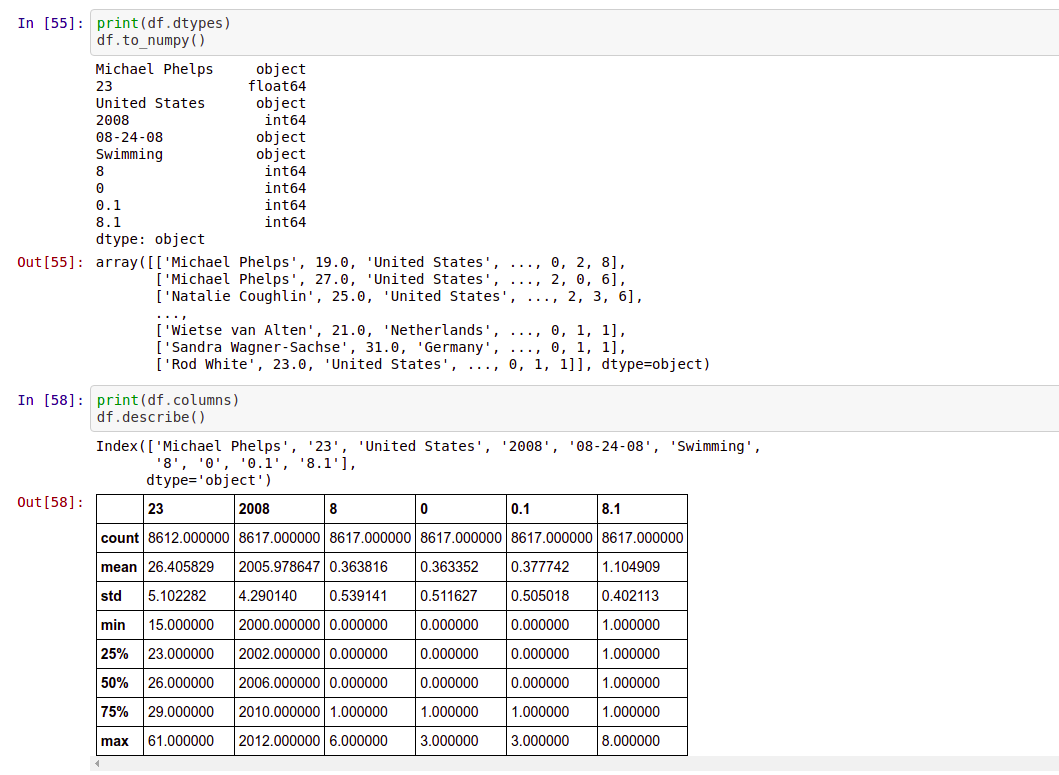 df.describe(include='all') → It describes the summary of all columns in the dataframe.

df.set_index() → sets the dataframe index using the existing columns. By default it will have RangeIndex (0 to n-1)

[To modify the df, have to mentin inplace=True or have to assign to df itself. If not, it will return a new dataframe and the original df is not modified..]

df.reset_index() → Reset the index of the dataframe and use the default -index. 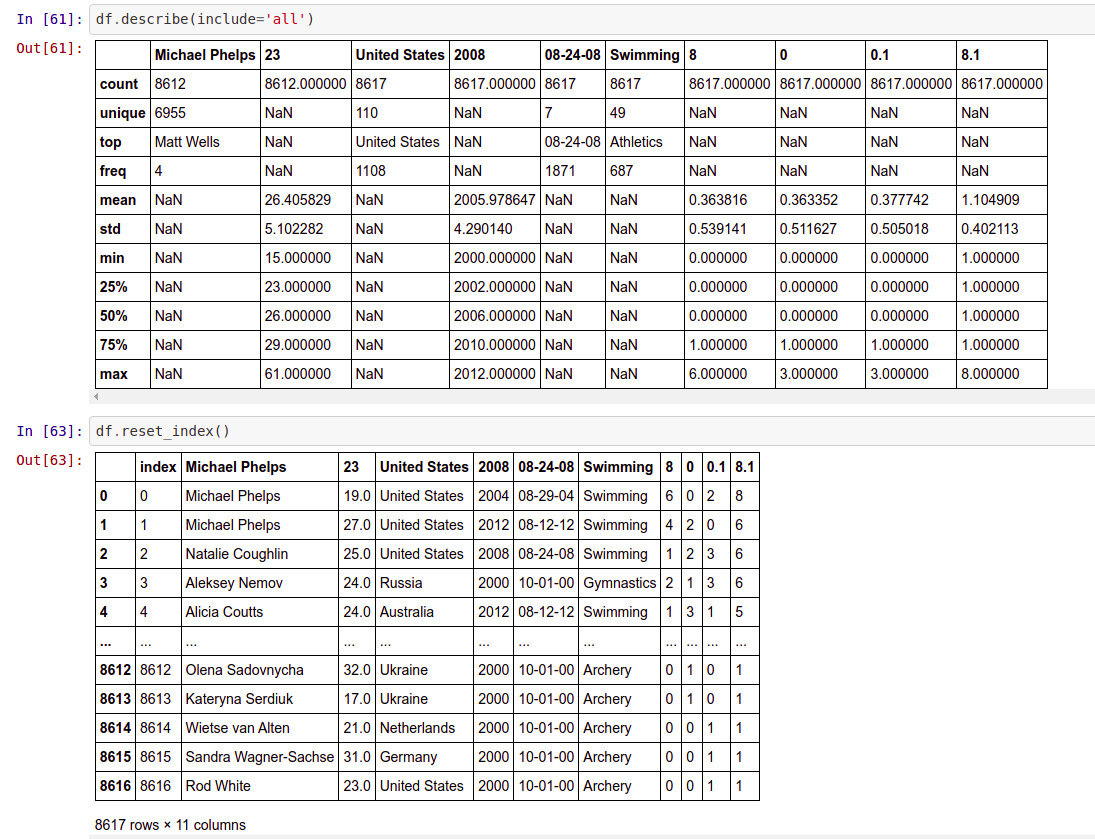 How to drop/fill the null values in the dataframe?


Suppose we want to check whether a pandas dataframe has null values.
df.isnull().sum() → Returns the sum of null values in each column in the df

df["col_name"].isnull().sum() → Returns the sum of null values for that particular column in the df.

If we want to look into the rows which have null values
df[df["col_name"].isnull()] → Returns the row which has null values in the “Price” column.

After looking into the rows, we can decide whether to drop or fill the null values.

To drop all the rows having null values
df.dropna() 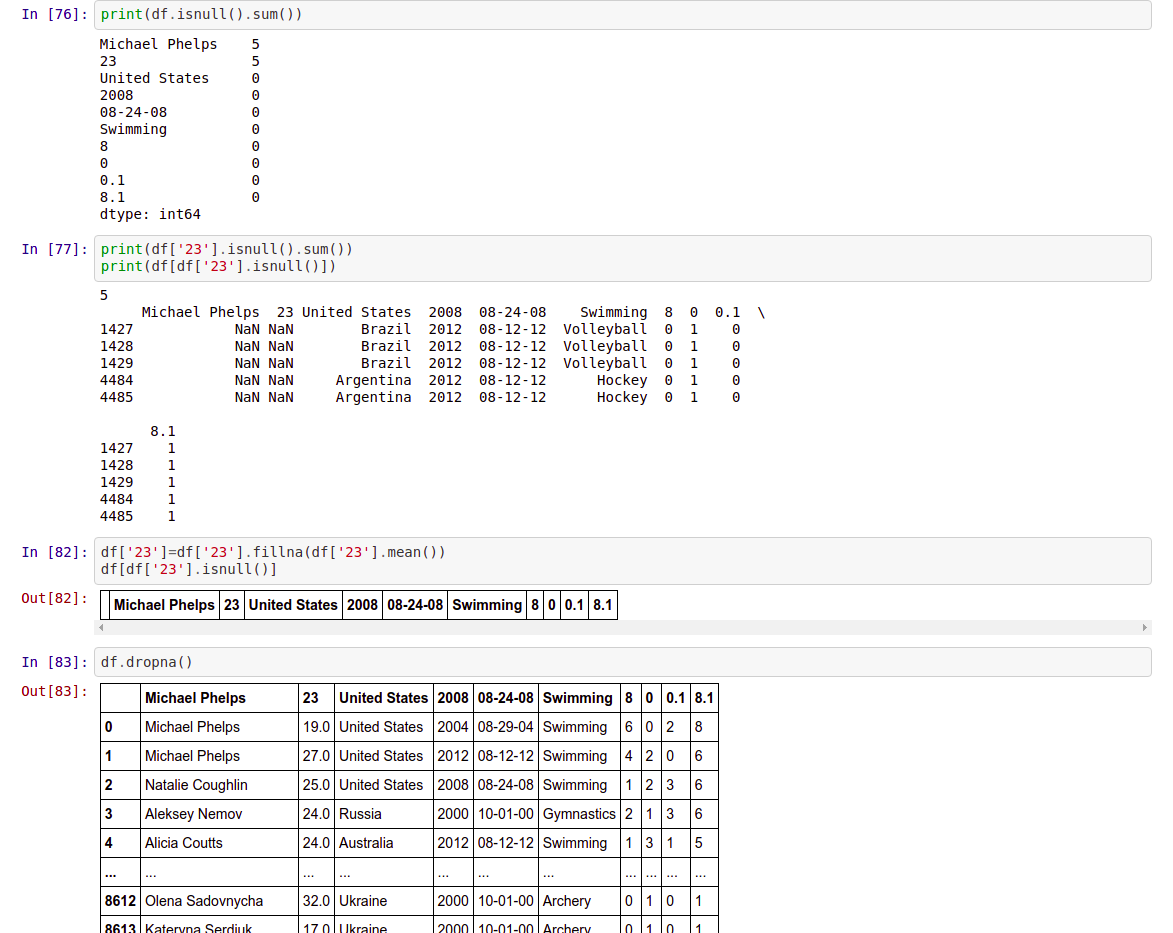 It’s good to get the statistics for the data, and to know how to select certain parts of the DataFrame, but it’s certainly nice to see some graphical interpretation of the dataset.let’s take a look to simple plots with Pandas.

This article is just the tip of the iceberg, I cannot emphasize enough that there are dozens more functions and methods, which all could not get covered and presented, but you can find them in the official Pandas documentations.

Also, as you will work with your own data, you will encounter many of them, by your own.and I encourage you guys to try it and share your experiences, But as a beginning step, to familiarize with our friend Pandas, you will certainly find the above tips useful.

Thank you for reading my article at OpenGenus, I hope you found it helpful and please do share it with others!

We have explored efficient approaches to find Number of integers between 1 and N that are coprime to N. We have presented the idea of Euler φ (phi) function and is an important topic to get hold on Mathematical Algorithms.

We will see what is BERT (bi-directional Encoder Representations from Transformers). How the BERT actually works and what are the embeddings in BERT that make it so special and functional compared to other NLP learning techniques.