In this article, we have explained the Time and Space complexity of the Radix Sort with Mathematical and Intuitive Analysis.

Radix sort is a sorting technique that sorts the elements digit to digit based on radix. It works on integer numbers. To sort the elements of the string type, we can use their hash value. This sorting algorithm makes no comparison.

In this article, we will work for base b=10 for simplicity. For base b, number of digits in a number mx is d = $\lfloor log_b(mx)+1 \rfloor$

Given an array of n elements arr. Here, we have implemented two functions named countingSort and radixSort.

In radixSort, at first we need to find out the largest value. In step 6, while loop iterates over all digits of the mx from the end and calls the countingSort function. While loop calls the function for d (number of digits in mx) times.

In countingSort, at first, we need to initialize the cnt array with 0. Then, we store the occurrence of each digit of input elements in the cnt array. Example:
Let a number 123 and we need to find the 1st number from the end of it. So, it should be 3 and we'll increase the cnt[3].

In step 4, we calculate the cumulative sum of the cnt array. Now, cnt[i] holds the number of digits less than or equal to digit i.

The time complexity of above algorithm:
For radixSort-

The time complexity of radix sort is O(d*(n+b)).

In the average case, we have considered the distribution of the number of digits. There are D passes and each digit can take on up to b possible values. Radix sort doesn't depend on the input sequence, so we may keep n as a constant.
The running time of radix sort is, T(n) = d(n+b). Taking expectations of both sides and using linearity of expectation, 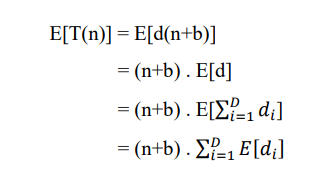 As di grows, the value of the term grows to D exponentially. The sum will be less than b * D which we can assume to be O(D) for simplicity.

The average case time complexity of radix sort is O(D*(n+b)).

In this algorithm, we have two auxiliary arrays cnt of size b (base) and tempArray of size n (number of elements), and an input array arr of size n.

Conclusion on time and space complexity

Radix sort becomes slow when the element size is large but the radix is small. We can't always use a large radix cause it requires large memory in counting sort. It is good to use the radix sort when d is small.

Comparison with other sorting algorithms

In this problem, we find the length of the Shortest Subarray with at least K as sum. This can be solved in O(N) time complexity. This brings in the ideas of Monotonic Queue and Sliding Window.

Pruning in Machine Learning is an optimization technique for Neural Network models. We have explained how to do pruning, different types of pruning, random pruning, advantages and disadvantages of pruning.