Spatial interpolation, this is a process of using points with known values to estimate the values of other unknown points.

Problem: We are given a topographical map.

We want to measure and show heights of all points from absolute 0.
Naively, we can measure all heights from every point on the map but this will be cumbersome.
Optimally, we can take the heights of some points and interpolate the rest of the points, that is use the known to get the unknown. This is called height interpolation.
To do this we fly a plane over a map and we get the height measurements for different points on the map p = (px, py, pz).

We project the points on the plane and get a map. 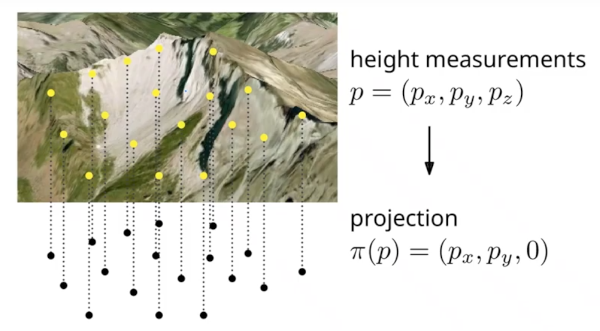 We subdivide the plane into cells such that within each cell every point has the same nearest neighbor from any point in the cell, this is called a voronoi diagram, We have also discussed voronoi diagrams here. 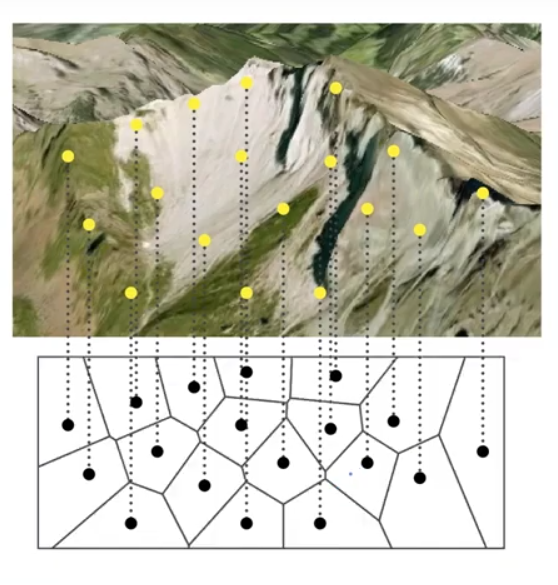 Given two heights, we can interpolate between the heights easily to get an unknown, given a plane with multiple points(heights), we need to choose heights which we then use to interpolate from a chosen height. This is where triangulation comes in. 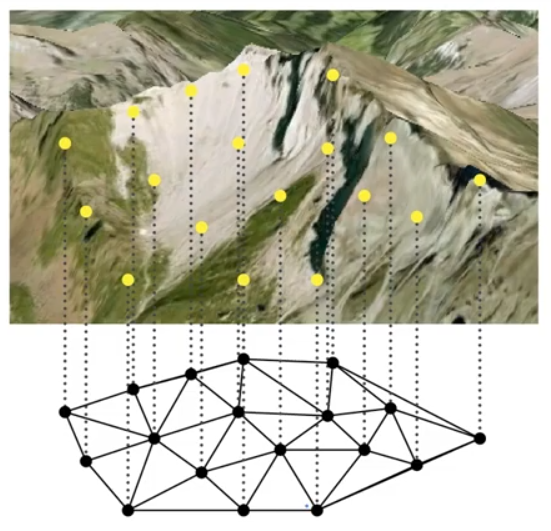 The image above represents a subdivision of a plane into triangles within the convexity of the points.
Now, to get an unknown we take 3 vertices of a triangle and interpolate appropriately.

Definition: Given , a triangulation of P is a maximal planar subdivision with vertex set P.

A triangulation can also be defined as delaunay if for every triangle it holds that the interior of its surrounding circle is empty. empty circumcircle property. visualize
We will see this in the properties section.

Given a set P of n points on a plane.
Vor(P) = subdivision of the plane into voronoi cells, edges and vertices. 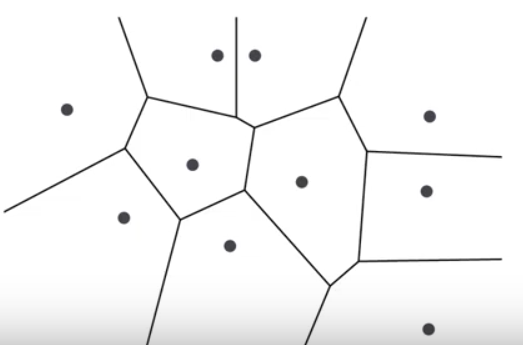 We add edges between two points if the points are adjacent(share an edge) to each other in the voronoi diagram to get a dual graph. 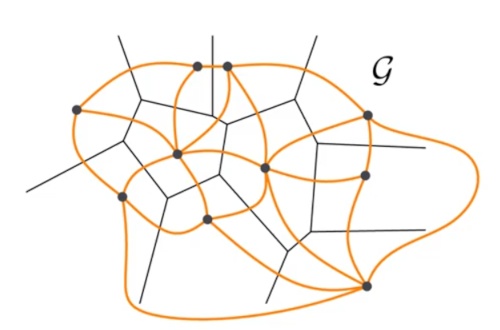 We straighten the lines of the dual graph to obtain a delanuay graph. 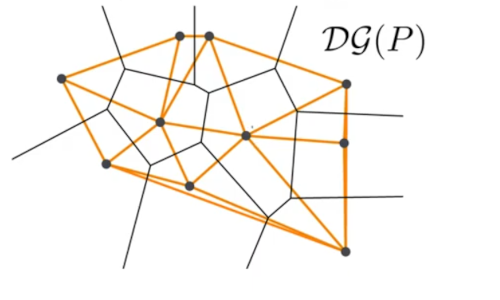 Definition: The delanuay graph DG(P) is the straight line drawing of graph G.

proof: (by contradiction).
Edge pq is in closed disk such that and
A property of voronoi edges, if we have two cells that correspond to two sides p and q, then we have an edge p and q in the delanuay graph iff there is an edge between the cells in the voronoi diagram. 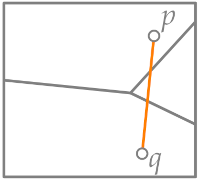 We have a voronoi edge iff there is a closed disk that contains the two sides on its boundary and no other points in its boundary or interior. 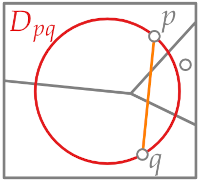 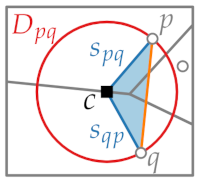 We assume that there is a crossing that is, any other edge in the delanuay graph uv that crosses the edge pq. 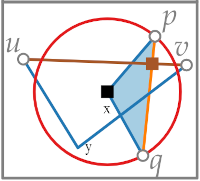 u and v cannot lie in the disk of p and q because of the edge, therefore uv cannot lie inside the triangle pqx, the only way a crossing exists between uv and pq, is that the edge crosses another point(z) of the triangle. 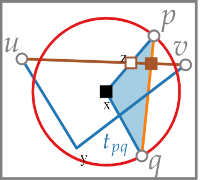 This means that all vertices have to lie in the same circle, which is not possible, and we have contradiction.
We cannot have a crossing between pq and uv, therefore the graph is plane.

Given a finite point set .
(i) Three points are vertices of the same face in the delanuay graph iff there is a voronoi vertex. 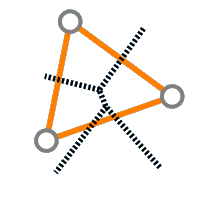 That is, there is some disk that contains the 3 points on its boundary but no other points in its interior.

(ii) We have an edge iff there is a voronoi edge, that is, a there is a disk that contains exactly the two sides on its boundary and no other sides in the interior. 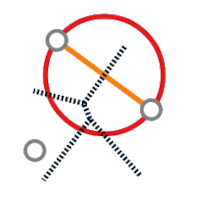 Definition: A triangulation of a point set is a maximal planar subdivision with vertex set p.
Planarity means it is non-crossing as we have shown in the above section.
It is also maximal as we add as many edges as possible so that every face forms a triangle

We observe the following;

Complexity of a triangulation

Theorem: Let P be a set of n non-collinear points(if they are collinear no triangle can be formed) and let h be the number of vertices of CH(P).
Then every triangulation P has t(n, h) triangles and e(n, h) edges.

To compute t(n, h) and e(n, h), we can use Euler's polyhedron formula for connected planar graphs. That is #faces - #edges + #vertices = 2 including the outer face.

Given a point set we have many ways to triangulate it.
We first used a voronoi diagram where we used height interpolation to estimate unknowns following that we want to use triangulations to obtain a continuous height of the plane.

How to choose a good triangulation?

We are given the following points set with different triangulations.

They differ in the green and red points respectively, If we want to perform height interpolations between the two points we obtain 985 and 23 when we interpolate on the red edge and green edge.

It is more probable that 985 is correct since the edge is much shorter, it is also more natural to go with values that are much closer to the points.

That is, on the left image we have a consistent terrain of high points(mountains/hills) but in the second there are high terrains(mountains) and then a sudden drop(valley) which is not consistent.

We could also argue that the second gets its values from points that are far away (thin triangles).
Intuition: We want to avoid thin triangles - this is caused by small angles which means that we want to maximize the smallest angle within a triangle.

Definition(angle vectors): Let T be a triangulation of P with m triangles and 3m vertices. Its angle vector is where are the angles of T sorted in increasing value.

For the two triangulations and we define an order A(T) > A() according to the lexographical ordering.
That is we look at the smallest angle and sort then based on that value.
The first(left) will be higher than the second because it has a higher starting value.

Therefore in terms of angle optimality and avoiding small angles we would choose the first which is maximal.

Definition: Let T be a triangulation. An edge e of T is illegal if the smallest angle of the triangles incident to e can be increased by 'flipping' e.

Given the edge e below, if we flip it we get a larger angle, therefore we say that e is an illegal edge.

To get an angle optimal triangulation we have to flip the edge e.
Note: Flipping an edge also means that angle vector will have increased in terms of lexical graphical ordering.

How to determine illegal edges without comparing angles 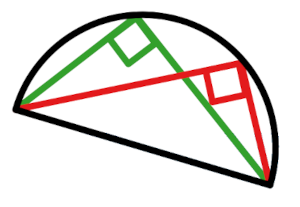 A generalization (Thales++).
Theorem: Let C be a circle, l a line intersecting C in points a and b and p, q, r, s be points lying on the same side as l. Suppose that p, q lie on C, r lies inside C and s lies outside C.
Then where denotes the smaller angle defined by 3 points a, b, and c.

We use the generalized theorem to characterize an edge as legal or illegal.

Lemma: Let prq and pqs be two adjacent triangles in T and C be the circumcircle of prq.
Then is illegal

If p, q, r, s form a convex quadrilateral and then either or is illegal. 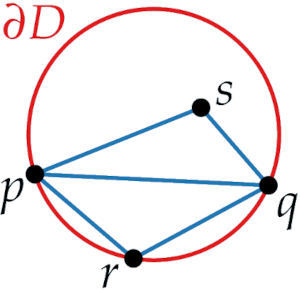 Proof.
We want to show that for all angles in the triangulation after the flip, there is an angle in the original triangulation that is smaller.

We have the new two angles, for both we have smaller angles(colored orange) 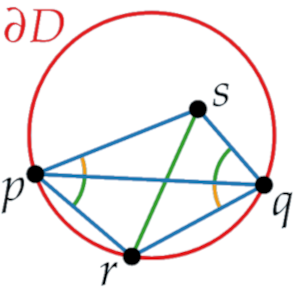 We look at the angle in qrs and we extend the segment rs until we hit the disk. 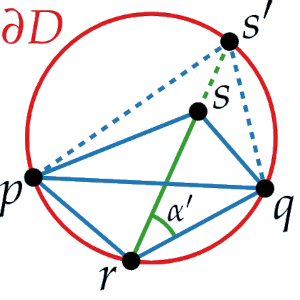 We use the segment between and q as the base segment for thales++ generalized theorem.

According to the theorem, if we consider the angle and the angle at spq, they are exactly the same because they both lie on the circle. 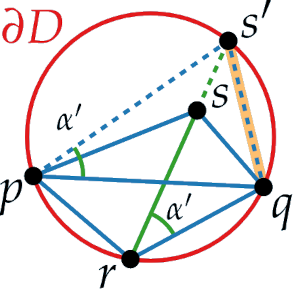 Looking at the angle sqp, for we found a smaller .
We can do the same for the remaining three angles and find a smaller in the blue colored triangulation.

Proof that a legal triangulation exists.

With have shown that every angle-optimal triangulation is legal, if it is illegal we can improve it then it is no longer angle optimal.

We are given the following point sets, 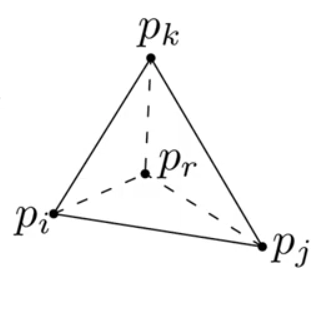 Explanation.
We check legality of opposing edges pi pk, pk, pj and pi, pj by calling LegalizeEdge recursively three times.
If edge is not legal we flip and check the remaining edges. 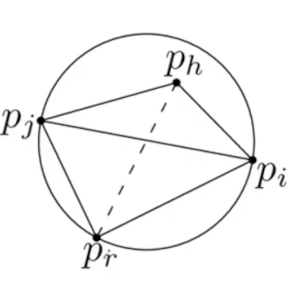 Explanation
We check whether it is illegal by checking whether the point on the other side in the circumcircle of the triangle pi pj pr.
If it is inside, the edge is illegal so we flip.
Then recursive call the algorithm on the edges pj ph and ph pi.

Colloray:
If the points are in general position, we get an angle optimal triangulation of a set of n points in O(nlogn) time.

Colloary:
If the points are in arbitrary positions we can maximize the minimum angle in O(nlogn) time by filling the holes arbitrarily.

Corollary:
An angle optimal triangulation of an arbitrary set of n points can be computed in O() time.
We compute the delanuay graph, and fill holes(vertices on a common circle) to optimize the angle vector for each hole. which are completely independent from each other.
We triangulate and use the flipping algorithm until we get an angle optimal sequence, after flips we get an optimal.
Which translates to time for filling these holes.

With this article at OpenGenus, you must have a strong idea of Delaunay Triangulation.

This article covers Time and Space Complexity of Hash Table (also known as Hash Map) operations for different operations like search, insert and delete for two variants of Hash Table that is Open and Closed Addressing.

In this post, we discuss the heap data structure and how to create a min and max heap from N given integers in form of an Array. Similarly, inserting elements one by one take O(N logN) time but the optimal approach takes O(N) time.