Recursion is a coding technique/ design in which a function calls itself directly or indirectly and the corresponding function is called as recursive function. Using this many problems can be solved easily with less time.

There are two major parts in recursion:

Note that if there is no base condition, then it results in an infinite loop of function calls and the system will halt. 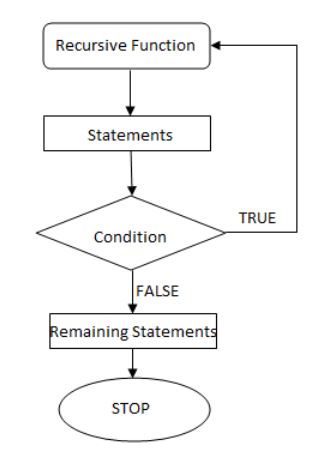 What is base condition in recursion?

In recursive program we have 2 conditions to be followed :

In the above example, base case for n < = 1 ( as the value for n < = 1 is always 1 )is defined and larger value of number can be solved by converting to smaller one till base case is reached.

There are two types of recursion:

A function fun is called indirect recursive if it calls another function say fun_new and fun_new calls fun directly or indirectly.

Recursive functions use something called “the call stack.” When a program calls a function, that function goes on top of the call stack. This similar to a stack of books. You add things one at a time. Then, when you are ready to take something off, you always take off the top item.

I will show you the call stack in action with the factorial function. factorial(4) is written as 4! and it is defined like this: 4! = 4 * 3 * 2 * 1. Here is a recursive function to calculate the factorial of a number:

Now let’s see what happens if you call fact(4) The illustration bellow shows how the stack changes, line by line. The topmost box in the stack tells you what call to fact you’re currently on. 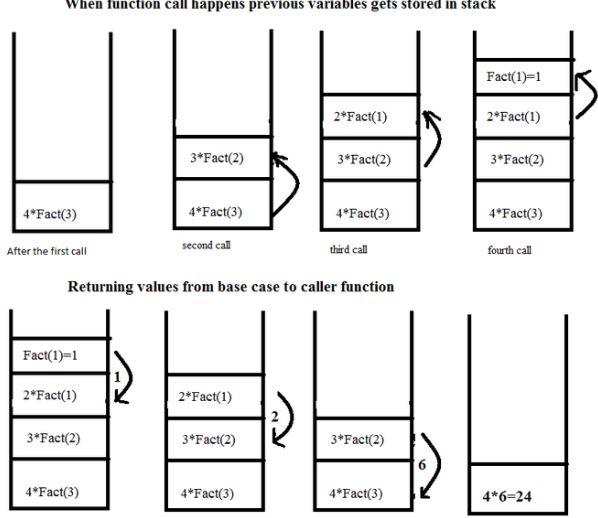 Conversion of a loop into recursion

The following code uses the while loop to compute the Greatest Common Divisor (GCD) of two numbers:

The above while loop is converted to a recursion in the following code:

Difference between recursion and iterations

Recursion is similar to which of the following?

loop
switch case
if else
none
Recursion is similar to a loop.

A function in C is a set of statements that take inputs, do some specific computation and produces output. The idea is to put some commonly or repeatedly done task together and make a function, so that instead of writing the same code again and again for different inputs, we can call the function.